I was both excited and sad to tune into the hour-long finale episode of Disney’s Gravity Falls. It seems like forever since I reviewed Season 1, and while it was great, Season 2 was on a whole different level. The stakes were higher, the spooky stuff was much more terrifying, and while I sometimes worried about the messages the show sent, I was gratified by the finale in more ways than one. Spoilers after the jump.

While Season 1 set up many a mystery in Gravity Falls, Season 2 set to unraveling them. We discover much about the history of the town, learned more about the authors of the journals and, finally, found out the reason Stan has been using them in secret. It turns out that Grunkle Stan also has a twin, the real Stanford. Grunkle Stan’s name is actually Stanley; he adopted his brother Stanford’s identity when Ford’s research into the supernatural sucked him into an alternate dimension—Bill Cipher’s dimension. Stan painstakingly recreates Ford’s research to bring him back, but in doing so, introduces further conflict. Their old sibling rivalry flares back up, and Dipper’s fascination with Ford, who he discovers wrote the journals he’s been obsessed with, puts a strain on his and Mabel’s relationship. Bill capitalizes on this discord to get ahold of Ford’s research and crack open a rift into the real world, leading an army of horrorterrors into Gravity Falls and setting himself up as the supreme ruler. Scattered by the incursion of nightmare beasts, Dipper, Mabel, Wendy, Soos, and Stan have to first reunite and then formulate a plan to save the world from Bill’s Weirdmageddon. 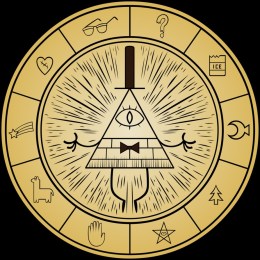 All in all I found the way the creative team wrapped up the story pretty satisfying. At first, it seems like the Power of Teamwork ™ combined with that round sigil of Bill we’ve seen everywhere will stop Bill—the characters all stand on a symbol that represents them and hold hands, and it seems to be working, but sibling rivalry strikes again. Stan, angry that he’s always risking life and limb to clean up Ford’s messes with no sign of thanks, breaks the link at the last second, giving Bill a chance to strike back. With their team ever-decreasing in number as Bill enchants anyone he can reach into stone or worse, they scramble to think up a Plan B.

In the end, Stan agreed to dress up as Ford and let Bill enter his mind, as Bill believed Ford had important secret knowledge about how to take his reign of weirdness global. Ford then zapped Stan with a memory gun, erasing Bill from the real world—along with all of Grunkle Stan’s memories. They couldn’t end with the twins all Grunkle-less, though; it is a Disney show. Love turns out to be stronger than memory guns, and Mabel is able to jog his recall so he remembers them all. In other circumstances I might complain about this magical memory return, but like, weirder shit has happened in Gravity Falls. The show might go hard on the body horror and existential horror, but I’ve always appreciated its general avoidance of anything too heartbreakingly sad.

And just like that, summer is over. Stan is able to give up running the Mystery Shack, which was only ever a front to cover up his search for Ford; finally reconciled with his brother, they head off to travel the world looking for weird shit like they’d always planned to as kids. Soos takes over the Shack, the town agrees to never mention the Weirdmageddon again, everyone says their farewells, and Dipper, Mabel, and Waddles board the bus back to home.

The series seems like it’s gone back and forth on whether or not Wendy and Dipper were compatible as a romantic couple, and when she switched hats with him at the end of the finale and gave him a letter to open later on, I was worried that the needle had fallen squarely in the romance zone. Thankfully, however, they didn’t squander all the character development work they’d put in teaching Dipper that his obsession with Wendy was unhealthy and unattainable with their current age gap. When Dipper opens Wendy’s letter, he finds a friendly message signed by the whole Gravity Falls squad rather than any sort of private love confession or promise of more.

In fact, the only overtly romantic overtones were between Sheriff Blubs and Deputy Durland, who I mentioned in my Season 1 review were pretty strongly coded as gay throughout the whole show. When they’re reunited post battle, Blubs tenderly cradles Durland in his lap and scolds him, “Don’t you ever scare me like that again!” And then, we got this:

This isn’t Cartoon Network, so there was no follow-through smooching, but this was more than I expected out of Disney by a long shot, and I’m comfortable calling it canon.

If I had to register one complaint, however, it’d be about Pacifica Northwest. After getting a few episodes this season devoted to rounding out her character, I thought she’d play a bigger role in the end. While I know the focus needed to be on the protagonists’ relationships, I wish she had gotten a little bit more screentime in the finale rather than maintaining the same “supporting character with only a few throwaway lines” role as characters like Grenda and Gideon. She’d only just gotten to a point where she was learning not to lean on her privilege and prejudices, and it would have been cool to see that through.

When the news broke that the end of Season 2 would be the end of the series, I was sad about losing a show that consistently delivered good and meaningful storytelling. You either die a hero, though, or live long enough to see yourself become the villain, and I deeply respect the decision to tell a complete and heartfelt story with a satisfying ending. More shows—for kids and for adults—could benefit from this lesson rather than plowing inexorably forward always trying to top last year’s stakes. For now, I bid a fond farewell to Gravity Falls, and I look forward to finding out what its creator Alex Hirsch does next.

2 thoughts on “Farewell to the Falls: Gravity Falls and the Beauty of a Completed Story”