We’ve just come right out of Black History Month, and we’re right into Women’s History Month. What a wonderful time to spotlight more creators in the nerdy and tech spaces! I wanted to interview someone very active and inspiring in the indie gaming scene, and a creator who quickly came to mind was Catt Small. She is a Black game developer from Brooklyn, known for putting together the Game Devs of Color Expo, Code Liberation, and speaking about diversity in the games industry.

Although she is very busy, I was able to get a bit of her time to ask her some questions. Check out the interview after the jump! 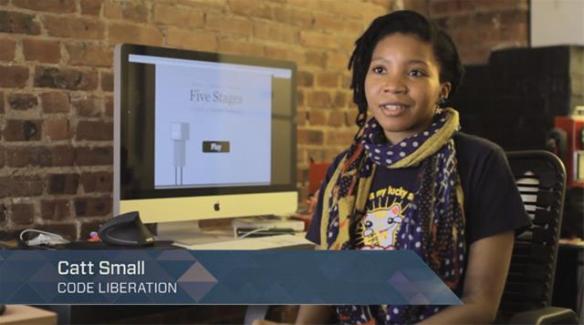 via Geeks Under Grace

Dom: What got you into video games and game development?

Catt: I have been interested in video games since my childhood. My mom and I used to play SEGA Genesis games together to pass time and bond. My parents also had an early Windows computer that came with a CD pack of (terrible) games. I spent a lot of time playing games by myself and with others—it was just another part of my life.

When I turned ten, I learned about programming and started trying to make my own games. I was able to make interactive dress-up dolls, but didn’t understand the systems behind more complex games. Almost ten years later, I met other people who also wanted to make games and we figured it out together.

Dom: To go back a bit, what is your background behind game development? What kind of schooling and work things did you do?

Catt: I am a self-taught game artist, game designer, and programmer. The only thing I went to school for was graphic design. Game development was something I did with friends because it was fun and creative in a different way than product design. We spent a lot of time making games after school (and later after work), as well as attending game jams. I never worked as a game developer for profit until I formed my own company, Brooklyn Gamery, after making an interesting game with two friends at a hackathon. We launched our first commercial game called Prism Shell in mid-2015, but we’re still figuring out the profit thing.

Dom: I got a chance to see your TEDx talk. In it, you mention encouraging marginalized people and serving as mentors to them in their game dev journey. What steps can big game developers take to ensure that they are supporting women and people of color?

Catt: Firstly, seek out marginalized creators. There are many talented creators out there whose work has gone unrecognized—just look at the creators on BlackGameDevs.com. Buy and share their work, especially if the work is good and/or has potential. Also provide them with helpful critique so that their work improves.

Secondly, advocate for marginalized creators. If you know of an opportunity, recommend them for it. I keep a personal list of people that I recommend for freelance work and speaking gigs. Invite marginalized creators to events, and give them the chance to share their voices. This is especially important to do if you’re someone who is well-known with access to many opportunities, because most marginalized people don’t have that.

Dom: Going further, you mentioned targeting specific goals and not trying to do too much at once. What goals do you hope Brooklyn Gamery (which runs the GDoC Expo) and Code Liberation can achieve this year?

Catt: Brooklyn Gamery just ran the first Game Devs of Color Expo, which was a resounding success. We also built a short narrative game for the Global Game Jam. Over the next nine months, we plan to prototype more in search of the mechanic(s) for the next game in the Prism Shell series. Additionally, we aim to lock down a date, location, and schedule for the 2017 Game Devs of Color Expo.

The Code Liberation Foundation, a group that aims to enable more women to make games, is focusing on several initiatives this year. We aim to create game development tutorial videos, organize more classes, and bring people together through the shared interest in playing and/or making games. The third goal will be accomplished by running events of different types including game jams, hackathons, and co-ed tabletop game nights. Through these initiatives, we hope to build a more cohesive community of women game developers.

Dom: Additionally, do you have any tips on setting specific goals and targets?

Catt: I always recommend identifying the purpose, scale, and target audience of a project before setting goals. Once you know why you’re working on a project, how large it needs to be, and who it’s for you can then break the project into small tasks. Those tasks can be grouped together to create milestones. Next, the milestones can be calendarized to create a timeline. Once appropriate deadlines are attached to the milestones, it will hopefully be easy to Do The Thing.

Dom: We just finished Black History Month! (Which is a divisive topic unfortunately.) Similarly, you recently put on the Game Developers of Color Expo. Can you elaborate on why, even in our supposedly colorblind society, events like this are still necessary?

Catt: I love this month!

Some people seem to believe racism ended somewhere between the late 90’s and when President Obama was successfully sworn into office without being assassinated. However, research (and people on social media) continuously show that although we have progressed as a society, racism is alive and well. White is still seen as the default race in our country, despite the fact that the United States is and has always been a melting pot.

The games industry is not immune to bias, and many of the people who rise above the rest are white. Events like the Game Devs of Color Expo are needed in order to ensure that developers of color are given visibility. It also serves as a gateway for people to get experience showing their game at an event, which will hopefully lead to them applying to show their games at conferences like GDC and IndieCade.

Catt: If you’re interested in the games I’ve made (or the ones I’m currently making), check out my website. I’m also on Twitter! Finally, if you know of any other Black Game Developers that aren’t yet on BlackGameDevs.com, please create an issue on our GitHub page so that we can highlight as many people as possible.

Dom: I want to again send my appreciation to Catt for her time. I’m always a fan of Black excellence whenever I see it, but it is amazing to see creators who give back and help develop the communities. This sort of work is paramount for marginalized groups, so while personal success is important (being a badass is its own form of revolution), it is just as important to bring up those around you. I hope that the work that Catt does can inspire us all to do the same.