A lot of sci-fi and fantasy stories like to delve into alternate realities at some point—and why wouldn’t they? Alternate realities can be a lot of fun. They allow writers to discuss characters from multiple perspectives and explore “what if” scenarios, which can certainly be interesting. After all, a character in one dimension may have completely different motivations and personal history to their counterpart in another dimension.

I love alternate realities. I love seeing how the same character reacts to different situations and upbringing, and I love how seeing these differences presented in an alternate reality helps to inform that same character in the main reality. Thankfully for me, alternate reality storylines are everywhere, from Charmed, to Stargate SG-1, and now even in Shadowhunters. These storylines are interesting character studies and an effective way to teach both the characters and the audience the consequences of bad decisions. Because this is often the purpose they serve, alternate realities are almost always dystopias compared to the main reality. Very rarely are they used for the opposite purpose—to be utopias compared to a main dystopian world. So I found myself pleasantly surprised when Shadowhunters did just that in its latest episode.

I don’t remember when I was first introduced to alternate realities, but if I had to guess, I’d say it was Stargate SG-1. The first season finds the characters in over their heads. A powerful Goa’uld System Lord—a parasitic creature that can possess people—parading as the Egyptian god Apophis, sets his sights on Earth and sends two war ships to attack it. Late 90s Earth is hopelessly ill-equipped to handle such a threat, and making matters seem more helpless, the character Daniel gets drawn into another reality where Apophis succeeds in dominating the planet and murdering everyone.

Stargate SG-1, like many other stories, used alternate realities often to show how bad things could get. Every single major character in the other reality died, and as the seasons progressed and Stargate introduced more alternate realities, the same thing happened over and over and over again. Stargate did this as a way to raise the stakes—it showed us just how bad things would become if our characters made the wrong decisions in dealing with the threats facing Earth. And Stargate was hardly the only story to do this. Both Heroes and Charmed also used alternate realities to feature more dystopian versions of their real worlds. Heroes had alternate timelines where people with powers were outed and hunted down. Charmed also had an alternate timeline where the same thing happened, to show us why the characters had to be careful to never reveal their abilities to the world. Charmed additionally featured an alternate reality where the powers of evil and good were switched. This world was a chaotic mess compared to the main world—the city was in ruins, people were scared for their lives, and corruption ran rampant.

Surprisingly, Shadowhunters, in its most recent episode “This World Inverted”, did the opposite. Clary, in a quest to find a portal that will lead her to Valentine, enters an alternate reality. The other reality, though, is not a dystopia, but a utopia. Shadowhunters won the war against demons hundreds of years ago and the downworlders have fully integrated themselves into Mundane society. As a result, the Shadowhunter culture disappeared. Now, not only does the world not face any demonic threats, but without the Shadowhunter society, the downworlders live peaceful lives free from oppression.

Valentine is no longer on an evil crusade to murder all downworlders. Instead, he’s happily married to Jocelyn and acts as a loving father to Clary. He also has hobbies—he’s obsessed with Alice in Wonderland and the Mad Hatter and even takes inspiration from that fandom in the building of his company. Isabelle doesn’t face familial pressures to be the best she can be and restore her family name. She runs around in nerdy Star Wars t-shirts and speaks with a noticeable Spanish accent while her brother does not. This tells me that alternate Isabelle, free from the Shadowhunter world, has found ways to take pride in her heritage and focus on other things she wants to do. Even Alec lives an emotionally healthier life, because in that world it’s socially acceptable to be gay. 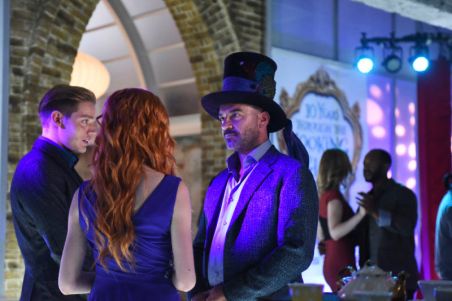 Probably the biggest difference, I would say, is that Clary’s relationship with both Simon and Jace is healthy and not toxic. Simon and Jace get along with each other, instead of fighting for Clary’s attention and blaming her for their bad decisions, and Jace is significantly less arrogant and boastful.

At one point a demon follows Clary through the portal to the other reality, prompting Jace to go in after it as well. Our two characters manage to kill the demon, ensuring that when they return to their own reality, all will still be well in the alternate one—except for the part where they accidentally murdered their counterparts.

Accidentally killing off characters shows don’t mean to kill is a huge oversight that makes me wish more thought and effort had gone into the writing process. Nevertheless, how Shadowhunters handled its most recent episode sets it apart from so many other “what if” storylines. It’s very easy to get wrapped up in thinking about how bad things can be, but by making alternate realities dystopias over and over again, stories can sometimes inadvertently start to ignore some of the problems in the main world. After all, if things could be worse, why would we complain about the problems we do have?

I appreciate what Shadowhunters did because it used its alternate reality to further illustrate how bad things already are. The alternate reality is better off because it doesn’t have demons, at least until one follows Clary there. But it’s also better off because it doesn’t have Shadowhunters. The Shadowhunter society is corrupt and uses its power to oppress and harm downworlders. We’ve seen Shadowhunters murder and attack downworlders indiscriminately for perceived crimes or lump them all in together for the actions of a few. Even the demon only manages to get into the other reality due to the actions of Shadowhunters, and while Jace and Clary manage to kill it, by opening the portal in the first place, they put the entire other world in jeopardy. While alternate reality storylines are an effective tool to tell us how bad things could get, Shadowhunters taught us that they can also be an effective way to let us know how bad things already are—and that, I think, is awesome.

2 thoughts on “Shadowhunters and Alternate Realities”