These days when an anime catches my eye, it’s typically because everyone and their mother is reblogging gifs of it on my Tumblr dash. Recently, between the last dying breaths of Dangan Ronpa and the never-ending stream of JoJo’s Bizarre Adventure, I’ve managed to catch wind of another series that seems to be right up my alley: a series full of magic, fairies, and a girl who (hopefully) ends up finding her inner strength.

While the manga for The Ancient Magus’ Bride has been out for years—it made its debut in 2014—this trailer is the first time I’ve heard of it. All summaries online seem to be surprisingly—and for the purpose of my viewing pleasure, thankfully—vague, but there’s enough there to be intriguing. From the time she was young, protagonist Chise Hatori lived a life many wouldn’t wish upon their worst enemies. Neglected and abused, Chise holds little hope for her future until one day at a slave auction she is bought by a strange man who honestly looks a little bit like a demon. With the promise of a better life behind him, he tells Chise that she will not only become his apprentice in magic, but also his bride. 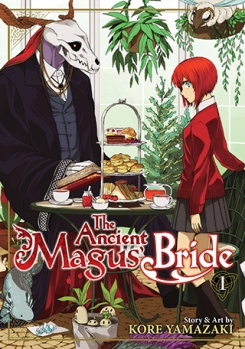 Now, this premise could easily slip into disgusting territory: being forced into a relationship is not a great trope for romance anime, especially when one party is incredibly powerful and looks potentially violent. However, I don’t think that this will be the case for two reasons. One, I haven’t seen any warnings for the series, and everyone who’s seen it seems to have warm feelings towards it. And two, the series is marketed as a shonen manga, rather than a shoujo. The latter is really what interests me. While shoujo manga doesn’t necessarily have to fit into the neat little flowers-and-blushing box we’re all too ready to put it into, it tends to be the case that it follows the same formulas which come with some pretty aggravating stereotypes. (Like pitting girls against each other until it’s plot convenient to be friends.) However, marketing it as a shonen brings some different expectations to the table. The way I see it, while the story, at its core, will still be about the relationship between Chise and Elias (the “Ancient Magus”), it will focus less on various inter-personal dramas and more on Chise becoming a strong mage who learns to protect herself and the ones she loves. While there’s nothing wrong about the former, for a story like this I desperately want Chise to be in an environment where she’s loved, or at least appreciated and respected, rather than worrying about varied gossip or being put in a subplot where her own feelings are used against her.

The first couple of episodes are slated for release in Japan on August 13th, and I have little doubt that subs will arrive not too long after. While I still have some questions about the series (like how old Chise and Elias are), I’m looking forward to seeing how Chise ends up regaining her life and how she heals from her traumas with the help of her supernatural friends.