Sleepy Hollow continues to spin off the rails in this second-to-last episode. The writers seem to be throwing plot points at the wall, hoping something will stick hard enough to win them a renewal order, but the events of “Delaware” left me mostly confused and annoyed. Spoilers after the jump.

We open on a tooth-rottingly sweet (and kind of sensual??) Ichabbie-share-coffee-and-donuts scene, where the two have such great and natural chemistry that I remain utterly boggled by the writers’ dogged pursuit of Abbie/Reynolds. From there we head to the planning sesh, where Reynolds shows up and wants in. The planned assault is twofold: Abbie and Ichabod will infiltrate the Catacombs, restore Pandora’s Box, and return to use it to stop the Hidden One. Meanwhile, the B team plus Pandora will do whatever they can to keep the Hidden One from doing his weird hourglass ritual and attaining “all the power of the ancient gods”, whatever that means. 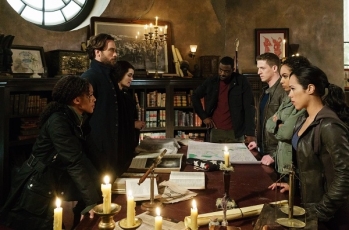 Jenny, Joe, Sophie, Reynolds, and Pandora head off to set up a trap using ley lines that will possibly disrupt the Hidden One’s powers. Reynolds takes point on this, and although he’s the most qualified strike team leader, he is also the least qualified in relation to the supernatural. It would have been nice to see someone call him out on taking charge, but everyone just rolls with it. Joe has to head back to Jenny’s trailer briefly to pick up some intel, where he runs into Papa Mills. Back on the mountaintop, Jenny tries to take a potshot at the Hidden One which, duh, doesn’t work. The Hidden One curses Joe to punish her and makes him go full, irreversible wendigo, and Jenny has to tear off to try to stop him from killing her dad and/or everyone. As they’re driving to safety, her dad reveals that he is John Winchester 2.0 and knows All The Things about the supernatural—it turns out he was also in the same platoon as Nevins and Corbin. How convenient! He presents Jenny with an experimental magic bullet that will stop pretty much any monster (so, basically, the Colt in bullet form). When the de-wendigo-ing ritual doesn’t work, Jenny shoots Joe with the bullet, probably killing him?? I’m not horribly invested in this scene or its outcome even though it gets a pretty hefty chunk of screentime.

Back on Idiot Mountain, the Hidden One is briefly held up by the B team’s counter-magic. Pandora heads up to face him as a suicidal last resort. I was pleased at this point that Reynolds tried to talk her down from this; his is the only response I think we’ve seen so far that treats Pandora as a victim of spousal abuse. No matter what kind of person she is or what powers she possesses, she’s still also a battered woman and it’s clear that Reynolds doesn’t want her to make herself face her abuser again. But she goes, despite his protests, and once she’s gone, Reynolds takes this alone time to admit to Sophie that he’d been spying on Abbie for his higher ups, and is now wondering if all this supernatural stuff is why they were making him do it. Nice job tying up that little thread, y’all. At the summit, Pandora confronts her husband, but he finally has finished a-charging his lazors and goes shitty-CGI Super Saiyan.

Meanwhile, after a National Anthem sing-along and a bit of river-bound flag waving, Abbie and Ichabod head into the Underworld to discover that Washington’s crack team had been ambushed shortly after passing through the gateway. Their bodies are still laying there, perfectly preserved, and Ichabod discovers an encoded message from Betsy, who went on with Washington after the ambush. The Witnesses pass into the Catacombs, where they slowly make their way to the hidden chamber described to them by Pandora. There they discover Betsy Ross’s corpse, which—surprise!—turns out to be not a corpse! Betsy has been trapped in the chamber for what she believes is months, but is actually 200+ years. I’m double confused about this, because first of all, she appeared to be dead, no pulse or anything, and Abbie couldn’t even fall asleep in the Catacombs. So how did that happen? And also, after ten months in the Catacombs, Abbie was in serious mental distress, but Betsy seems totally fine. She asks Ichabod how the war is going and he and Abbie realize that Betsy still thinks it’s 1776. And the episode ends there, on that… pretty anticlimactic scene, rather than on one of, say, the Hidden One Super-Saiyaning out on planet Earth.

This whole episode seemed like set-up that took too long. I was so confused when the credits started to roll because I felt like we were still mid-episode. The pacing was off throughout; the only reason Joe went back to the trailer alone was because it’d take too long to go and come back, but Jenny was able to get away from the Hidden One, down the mountain, into her car, and back to the trailer before wendigo!Joe could attack her dad. The B team spent most of the episode setting up their ley-line trap, but it only lasted like five minutes once it was activated. Abbie and Ichabod spent a lot of time deciphering the ambush on the banks of the Styx and then staring at “dead” Betsy before she woke up. It’s like they stretched what could have been a reasonably tight 90 minute finale into two hour-long episodes.

Regarding the reveal that Betsy’s still alive, I am obviously okay with them adding another lady character to the present-day roster should the show get a fourth season. However, I’m a cynical person, and I’m almost a hundred percent sure this is a neat way to let her and Ichabod pair off so Abbie and Reynolds can be together. I’m pretty sure the only people left watching this show are Ichabbie shippers, and given the likelihood of cancellation after this season, it’d be nice if they’d do us all a favor and not shoehorn these other two ships into what will probably be the last episode of the show. From a writing standpoint, I feel like the writers are hovering on the edge of self-awareness here; there were no fewer than three emotionally charged scenes in this episode alone where Abbie and Ichabod frankly discussed how much they cared for each other and how important the other was to them, and yet they still seem to want to put Betsy and Reynolds in between them.

With one episode left in the season, I’m hard-pressed to decide whether I should be pessimistic or not. While ratings have crept up enough over the past half-season to send Sleepy Hollow from definite cancellation to “it could go either way” status, the finale could make or break it. And even if it does get renewed, the events of next week’s episode could still be a deciding factor regarding whether I keep watching it. I’m deeply suspicious of Betsy Ross’s reinsertion into the storyline at this late point in the game, I’m vaguely resentful of the amount of time spent on Joe and Jenny’s romance, and I’m seriously side-eyeing the big reveal about Abbie and Jenny’s dad. At this point I just hope that the finale is something fans will be happy with if it turns out to be a series finale instead of just a season finale, but I’m also not holding my breath.