Another month, another post from me complaining about the state of queer representation in something or other. Up on the chopping block today is that apple of everyone’s eye, Hamilton. (It’s my fave too, y’all, it’s just a problematic fave in this particular aspect. Bear with me.)

Do he got the booty, Laurens?

Lin-Manuel Miranda himself is aware of this; he has confirmed that the Hamilton in his show, at least, is bisexual. If you follow his Tumblr, he’s very supportive of the ship the fandom calls “Lams”, and reblogs shippy fanart with the best of them. So it’s clear that unlike some other writers, we’re working with a creator here who is supportive of the LGBTQ+ community and who wanted to represent us in his fantastic and transformative show. Unfortunately, I don’t think it worked.

One of the things I know from being a fan of musicals, period, is that, save specialty recordings like Les Miserables’s Complete Symphonic Recording, the entirety of the show doesn’t always make it onto the CD. For example, I knew from scuttlebutt amongst fandom that the scene in which we find out that Laurens has died does have singing, but was not included on the recording. Furthermore, a musical is both visual and aural; you can’t get the full experience of the story by just listening to the soundtrack. I say this all to make the point that while I didn’t get any particularly Lams-y vibe from the CD, I didn’t want to pass judgment on the show without having seen how their relationship was portrayed on stage. There could be whole scenes of spoken word that weren’t included on the cast recording that clearly laid out their relationship. 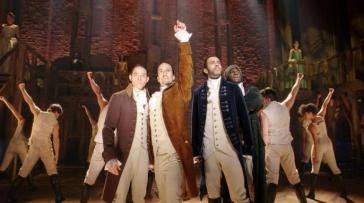 That said, I had the tremendous privilege to see Hamilton about a month ago. And while it was astonishingly good, easily the best musical I’ve ever seen performed, I did end up feeling disappointed about the way Lin-Manuel Miranda and Anthony Ramos acted out Hamilton and Laurens’s relationship. While they’re clearly the closest out of the Hamilsquad, there’s no part of the play or their interactions that can explicitly be pointed to as queer. In the scene where Eliza informs Alexander that Laurens has died, Alexander’s anguish almost seems out of place, because we don’t see enough of their relationship to understand his grief.

One of the problems with not explicitly coding this relationship into the story is that actually acting out a romantic connection between the two men becomes a choice that a given actor can make or not make. For example, although the Grantaire of the original Les Miserables novel is defined in part by his fixation on Enjolras—a fixation which many read as romantic—Grantaire has such a little role in the stage show that there’s no real verbal expression of this. A given actor may research the character and choose to focus on that in his physicality, but there’s no explicit spoken confirmation of an attraction, even a one-sided one. Often, actors playing Grantaire instead focus on his big-brotherly relationship with Gavroche to the exclusion of his adulation of Enjolras, and… there’s nothing actually wrong with that, because there’s nothing in the script of the play that tells actors that Grantaire was probably gay. Therefore, deciding to portray him as gay is up to the actor of the moment. 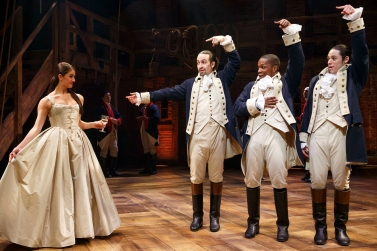 While Hamilton was probably bi, Laurens was probably gay, so including him in the “reliable with the ladies” part of “A Winter’s Ball” wasn’t the best way to telegraph that gayness to the audience…

Furthermore, regardless of whether or not a given pair of Hamilton and Laurens actors chooses to play it gay, so to speak, when they rely on physical choices that aren’t exclusive to queerness (a hug, for example, can happen between friends or lovers) to express that, it’s lost on audience members who aren’t already aware of it. It seems that Miranda’s intention was to forgo queerbaiting and make his characters downright, outright queer, but an audience trained in heteronormativity is not going to see it. While I personally saw their physical interactions—touches, hugs, etc.—and read them as queer, the average Joe who isn’t a trivia-obsessed superfan likely won’t.

I don’t want to come down too hard on the show. I love it dearly and it does such a great job of being transformative in so many other representation aspects. But I think it’s because of that I feel so let down in this regard. Hamilton does such fantastic work putting women and people of color “back in the narrative”, so to speak, and at the same time the story is actually pretty historically accurate. To have queer people unrepresented in something that’s otherwise so progressive really hurts more than a lack of representation in something that’s totally backward.

How could Miranda have fixed this? Well, while I love Angelica Schuyler, a lot of her narrative in the musical is made up. She was neither the eldest, nor was she brotherless, and therefore did not have the obligations to marry up that she raps about in “Satisfied.” In fact, she was already married when she and Hamilton first met, so adding her into the plot as a love interest based on their interactions in letters is a pretty heteronormative move, especially given that the speculation about Laurens and Hamilton’s relationship is also mostly gleaned from letters. While I don’t begrudge Miranda the fictionalization, I think the most natural place to have included an explicit reference to Laurens’s queerness would have been in “Satisfied”. By making the song a duet between Laurens and Angelica, he could have retained the Angelica/Alexander flirtation while also highlighting Laurens, to whom marriage with Hamilton was just as unattainable for different reasons. It would also have made it especially bitter and poignant that Laurens was best man to Angelica’s maid of honor. This would have established both Hamilton and Laurens’s canonical queerness, given us a better insight into Laurens’s character—as of now he’s pretty much just anti-slavery and nothing else—and cleared up exactly why Alexander is heartbroken to learn about Laurens’s death. Unfortunately that didn’t happen, and I doubt they’re going to take the most popular and talked-about musical in recent memory back for rewrites any time in this decade.

I look forward (along with the rest of the world) to whatever Lin-Manuel Miranda creates next, but I hope that whatever that is includes the LGBTQ+ facet of representation more explicitly.

6 thoughts on “Sexualized Saturdays: Hamilton and the Importance of Explicit Queerness”