If you frequent the internet and social media, you may know that about a week or so ago everyone was creating avatars to “Powerpuff themselves”. What you might not know is that this little activity was to promote the upcoming reboot for the Powerpuff Girls. Does the show hold up? Is it funny? Does it fall into the same lazy traps as other shows like Teen Titans Go!? Find out after the jump.

To put it quickly: kind of. The show kind of holds up; it is kind of funny, and it sidesteps the pitfalls some other reboots get criticized for. Powerpuff Girls is, in many ways, a tricky property to assess for many people. At its heart, it is a show for young girls. Being a reboot of a nostalgic property already complicates this as much of the show’s past female audience have grown into adults now. Additionally, the show was always relatively popular with young boys as well as young girls—the stories were easy to relate to independent of gender. Themes of family and friendship, going to school, and kicking butt will appeal to any demographic. (And more young men in the millennial generation are more open to admitting we did in fact like shows like this, Kim Possible, and Sailor Moon.) To be clear, I am an adult man discussing this, so keep that in mind.

That being said, I still really enjoyed the new episodes of what I saw. No matter what demographic you fall into, if you’re simply looking for more episodes of the old show, you will be fairly disappointed: a lot has changed. But the changes aren’t necessarily all bad. With an open mind, you’ll find a lot to enjoy. The first major change is another art shift. You may recall a minor reboot/special for the series a couple years back that saw a much more drastic, angular change. However, this was discarded for something closer to the original, albeit a bit more fluid: now, the lines are thinner and the animation is a bit smoother. The new style is pretty cute and feels appropriately fresh.

Apparently Miss Bellum is on a long vacation though.

Freshness updates are probably this reboot’s MO, if I were to guess. Besides the art style, the girls now have a new set of voice actresses. It’s a little jarring at first—I’ll always be fond of the originals—but it’s not show-breaking. In the vein of modern changes, the girls now have cell phones for the Mayor to call instead of the classic corded landline. This is a logical update, and probably makes it easier for younger children to relate to. Smartphones and mobile technology are increasingly ubiquitous to children in a way that they weren’t when the original was released. I mean, I’m not sure who has a corded phone anymore rather than wireless or mobile only. Small change, but it makes the show feel less dated.

But how are the plots, you might ask? Any good superhero show (and this definitely is) lives on its plots. If there is any splintering in the fandom, I assume this is where it will be. The stories straddle a line of being monster-of-the-week like they were before, and slice-of-life stories, which were also present. Some of the slice-of-life storylines show Blossom, Bubbles, and Buttercup as into stereotypically girly things like boybands and such. (Stereotypically, of course. Ask any millennial if they currently like 90’s boybands; I bet they’ll say yes.) Still, their characters remain the same from the original: Blossom is a school loving know-it-all, Bubbles loves cute and happy things, and Buttercup is an abrasive tomboy. At first blush, Blossom and Bubbles seem to have had those traits magnified, but not to the point of absurdity. Buttercup is the same, if a bit more of a joker/troll type. Again, they feel familiar but not stale.

I can only go by the first week’s worth of episodes (they released a few in the first week, then on a one-by-week basis) but the humor seems to be consistent with before. I chuckled a few times, so there’s definitely something there for adults/older kids watching with children/younger siblings without being lewd or inappropriate. This is usually achieved through absurd humor. For example, one episode involved the girls saving their town from a rainbow that made everyone infinitely party. It mostly involved Buttercup fighting a panda that wanted people to hug and twerk. A lot of the humor came from characters and viewers finding the situation uncomfortable. This was pretty funny to me: I always enjoy when some characters aren’t putting up with the onscreen nonsense, even if other characters are. This feels right at home in the show, as a fair portion of the original show’s humor was the citizens of town being oblivious to danger or obvious solutions. Buttercup was always a rebel, so her having to ignore parties to save her sisters and the town contained irony and a moral (there is a time and a place for fun).

This episode got really weird.

But if anything, modern humor may be the show’s biggest misstep that I personally saw. I see this in a lot of kids’ shows, so maybe I’m just getting old, but they tend to rely on really topical jokes and memes which are often dated by the time they air. In this case, it involved the aforementioned twerking and Bubbles saying “yaaas”. Another annoyance is the random jokes or setups that don’t seem to fit in the narrative in any natural way—such as Buttercup and Blossom deciding the best way to solve a dispute was through a rap battle before being cut off by their sister—which just seems like an example of out of touch adults trying to appeal to “what the kids say”. While this is one of my personal favorite methods of diffusing a situation, it was really apropos of nothing, with no setup and no real payoff. This, in my opinion, is the most glaring difference between kids’ shows that annoy older people, and kids’ shows that attract older fans. Teen Titans Go! falls so heavily into random humor that that might as well be the subtitle. Full episodes are dedicated to running gags that don’t seem to have any reason to exist. (In addition to not at all tonally matching the original.) Again, this may be what 2016’s kids are looking for. But I would like to hope that we can trust them to enjoy and comprehend less lazy material.

Luckily, at least for me, the Powerpuff Girls reboot doesn’t revel in this sort of humor. Like I said, I’m an adult guy. This show isn’t for me, so my enjoyment isn’t the prime goal here. That said, I liked it: it’s fun, cute, and just is pleasant to watch. I really think younger viewers will like it. I mean, it seems to hit all the notes that made our generation like it before, with the additional peppering of modern technology. I can recommend it, at least the first few episodes that I happened to catch—but I was informed that one of the episodes that I missed had some transphobic messages, so I can only hope that the show is trying, and will work harder on its flaws. Only time will tell if it continues to hold up, but I hope it continues to grow and stay true to what made our generation like it so much the first time. And if you’ve been reading here for a while, you know how much I care about representation. Young children, especially girls, need to see themselves well-represented on the screen, especially with non-demeaning content. So, while I want this show to be great for fans of the original, I hope that it can be great for new fans to the series. 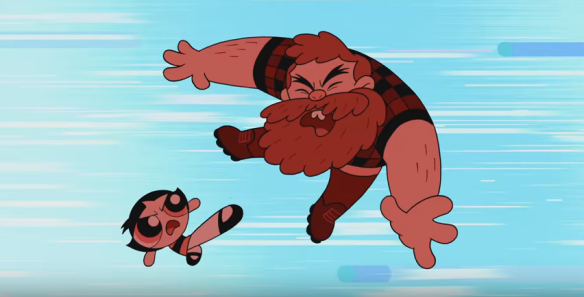 And hopefully they’ll do a little bit of smashing the patriarchy on the way.

8 thoughts on “The Day Is Saved: A Powerpuff Girls Reboot Review”