Through dangers untold and hardships unnumbered, I have fought my way here to the castles beyond this trite, melodramatic plot to take back the characters you have stolen, for my will is as strong as yours, and my headcanons as great.

All of this is to say that I have finally finished my tour through the trilogy of Fire Emblem Fates, and am now prepared to pass judgment on it. I’ve talked about some aspects of the game before, both prior to release and post-release. While I argued with myself for a good while before purchasing—especially before buying Revelation—what eventually won out was not the possibility of a long storyline delving into the grey morality of man during times of war, but my love for trashy dating sims. Make no mistake, though Fates arguably does have a story, it may as well be secondary to the relationship aspect of the game as the games don’t even try to include even half of the around 68 character cast (around 40 if you’re looking at Birthright or Conquest) in the main plot. And who can blame them: it would essentially be impossible. But, I’m getting ahead of myself. Let’s start at the beginning.

Spoilers for mostly everything beneath the cut, and a trigger warning for mentions of suicide.

At its core, Fates is a game about family. Protagonist Corrin finds themselves stuck with a difficult choice at the crux of the war: will they choose to side with the family that raised them in Nohr, will they help defend their biological family in Hoshido, or will they make both families their enemy by choosing to side with neither? Choosing to side with Nohr places Corrin under the scathingly judgmental eye of their father, King Garon, and the equally cruel command of Garon’s second hand men. However, with the tight bond of their Nohrian siblings, they manage to put an end to Garon’s brutal assault on Hoshido (and their mental abuse of Corrin, and the rest of the family) and uncover that the real King Garon has been dead for a long while, his body now possessed by the spiteful dragon Anankos. Siding with Hoshido allows Corrin to flourish in a much more nurturing environment, but they must deal with the suspicion that many Hoshidans hold for them after being the one who inadvertently killed the queen. Through perseverance, Corrin manages to break through Nohr’s defenses and take down King Garon, bringing an era of peace to both kingdoms despite the heavy losses on both sides. 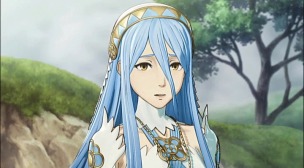 Azura is in all three games, and also just so happens to be your cousin.

Revelations ties both of these stories together. Unable to side with either family, Corrin is led by Azura (a mysterious girl who has connections to both the Hoshido and Nohr royal families) to the kingdom of Valla. It’s here that Corrin discovers that this war between the two countries is actually being orchestrated by Anankos so that he can take over the world and bring suffering to the humans who have forgotten him. It’s up to the both of them to recruit both sides to take down Anankos; however, there’s a problem: if you speak of Valla outside of Valla, you’ll disappear. Both countries eventually come to trust Corrin, and together they defeat Anankos, bringing peace without sacrificing anyone from the royal families.

I’ll come out and say this right now: I do believe whichever game you end up playing first, you tend to think of that one in a better light. I played Conquest first, and I unrepentantly think that’s the best installment. However, all of them suffer from the same problems, even if in different amounts. One of the largest problems the game has in terms of plot is the discrepancy between character deaths. In all three games, important characters die—both important in terms of the game’s universe (like royalty) and characters that the audience is supposed to have made a connection with. However, I found that the motivations behind these deaths were, for the most part, dependent on the character’s gender. Before, I spoke about the pointlessness of Queen Mikoto’s death in Hoshido: she wasn’t a character dying, but a representation of goodness and purity being killed off to add to needless character pain. A similar situation happens with Princess Elise of Nohr, although if you play Conquest first, you get a much better feeling of her character. Yet, if Birthright was your first game, she kind of comes off as a Mikoto clone: kind to a fault with no seeming negative character traits. Not to mention that she dies protecting Corrin from getting fatally wounded by their brother Xander, begging for peace with her dying breath. Now, while this is the only thing that gets Xander to even consider allowing Corrin to continue on in order to defeat Garon and it’s got that sort of essence du manpain on it, I honestly wouldn’t have had that much of an issue with it if one woman in the series was allowed to die in the same way the men were. 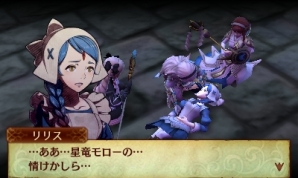 She literally only shows up to die. How is this not pointless?
via JRPG Review

Every male character death is done for the greater good, with the sense that they are willingly giving themselves up in order that peace may be achieved. In Birthright, Xander kills himself in order to allow Corrin to reach their goal, not being able to betray the trust of his kingdom by traveling alongside with them. In Conquest, Prince Ryoma takes his own life so that Corrin, ordered by Garon, doesn’t have to. Even Izana in Revelations realizes that by asking the gods for information, like Corrin asked him to, he will most likely die, but does so anyway. In each instance of this, the male character was given a heroic death that they were in complete control of. However, in both Conquest and Birthright, Corrin’s young friend Lilith dies after protecting them from a fatal blow, much like Elise’s situation. Additionally, with only minor differences, in Revelations the knight Scarlet is killed on the way to Valla protecting Corrin from some mysterious foe. The deaths of each of these women are presented in a way in which to make the audience sit back and think “wow, war is bad. Look at this good, pure person dying.” Elise’s death was a powerful moment, yet the deaths of these other two young women were completely pointless and only served to add to a somewhat misogynistic trend rather than add to the tension, bringing Elise’s death down with them. In short, the death of men in Fates always serve some plot significance while managing to maintain character integrity, while the death of women tend to serve as emotional outrage, focusing more on the reactions to the death than the choice the characters made to sacrifice themselves.

Another thing that I found incredibly side-eye worthy was how much Hoshidan ass the games kissed. There is one scene in all of the games that shows Nohr as being more than the evil land of evil and badness—even after we all know that if the royal kids of Nohr are good, there’s got to be other good people there, too. However, while Hoshido is called out once or twice for being unable to see beyond their own privilege (they live in a land of plenty, while Nohr suffers from food shortages), they are constantly presented as good people who can do no wrong. This is especially apparent in Revelations. Near the end of the game, while infiltrating Anankos’s castle, the party must fight against the late Queen Mikoto and her husband Lord Sumeragi. Both of them are possessed by Anankos, causing them to fight against the party in the first place, however after they’re defeated, Anankos’s influence purged, Corrin and the Hoshidan siblings get a chance to have a tearful farewell with them before they die for good. Comparatively, when Garon shows up, he is immediately devoured by Anankos and the Nohrian children get no closure. By this point, everyone is aware that Garon has been possessed by Anankos, and the conversations with the Nohrian family reveal that Garon did, indeed, used to be a good man and a good father. Yet Garon gets no redemption or even an attempt at redemption.

Lastly, I want to echo my sentiment from my most recent Fanfiction Fridays and say that we really got fucked in terms of LGBTQ representation. The bisexual options we were given in Niles and Rhajat were decidedly not great. While the English translation did do its best to tone down the sadistic, cruel nature of Niles, he still ended up as a character who loves to make people uncomfortable with overly sexual innuendos, with a voice which seemed to be going for the stereotypical gay drawl. Unsurprisingly, Rhajat remains a stalker and exceedingly creepy, just like the character she was ripped off from. While yes, it’s still a step forward, in some ways, that same-sex marriage options were even included, there’s still a long way to go before their choices were even somewhat acceptable. Especially when there’s characters like Silas, your best friend who joined the army just to see you again, or Scarlet, the aforementioned knight who takes you on a stargazing date, who could have easily been options for same-sex love interests without the abundance of questionable character quirks. (Although having another wlw death on our hands is something I’m glad they avoided.) This isn’t even mentioning the character Soleil, who, even in the English translation, still loves girls. Openly. Even her father says to another character that “she has good taste in women as well as men”. But no, obviously she’s actually totally straight.

However, I can say that Fates made a surprisingly good turn with the character Forrest. While whether or not he’s trans is left up to interpretation, as far as the game presents him he is a young man who enjoys stereotypically girly things and excels at sewing. He loves wearing dresses, loves the color pink, and his father does not approve. Despite the initially rocky road between them, his father comes to love and appreciate Forrest for who he is, without Forrest needing to prove himself in any way. Forrest is confident in himself and who he is, which is one of the only good messages the game has for its audience. While some people believe that some of the original dialogue made his character more sympathetic, it’s nice to see some of that gender binary being broken. Charlie over at FemHype wrote a much more expansive article on this topic, going over the still present potential incest as well, so I would implore you to read that if you want to get more of a sense of these issues.

Now, it may seem like I’m burning Fates to the ground, but I will admit I enjoyed the games for the most part. I just… expected more. Not more characters–holy shit, we could do with about 60% less characters next game—but a better understanding of what Fire Emblem is as a franchise. While yes, everyone loves being able to ship characters and get to know them, that shouldn’t be the main focus of the game. Because of the emphasis on putting as many characters in the game as possible, not only did the plot suffer (any nuance put forth by Conquest concerning good and evil was subsequently dashed by the black and whiteness of Revelations), but the characters suffered as well, since there wasn’t enough time to really explore who they were or what motivated a good portion of them in relation to the plot. Next time, I hope the series goes back to focusing more on the story and political intrigues with a much smaller cast. If not, they they should honestly just commit and make a damned dating sim already.