It’s been ten or so days since the trailer for Rogue One first dropped, which means I’ve had time to cycle through a full circuit of emotions.

My first reaction to this trailer was one of pure, unadulterated hype. Jyn looks like a badass, this story looks like it’ll slot neatly into the original trilogy timeline, and it’s a step in the right direction in terms of balancing the gender representation scale in the Star Wars universe. Also, I always draw power from the tears of male fans weeping about the SJW apocalypse coming for their fandom.

As far as the plot is concerned, this seems like an interesting choice. Telling a story that predates A New Hope chronologically but doesn’t focus on a Skywalker family member gives viewers a break from the most dramatic family in the galaxy, and distances it from the ongoing story of Episodes VII-IX. Furthermore, the story of how the Rebellion got the Death Star plans in the first place means this is basically Space Heist: The Movie, and I am very very down for that.

The prevailing fan reaction seems to be one of disappointment, though, and it’s interesting to parse out the different reasons for it. The reactionary fanboy side is obviously appalled that the protagonist is, yet again, a woman; “wouldn’t it be revolutionary to have a male protagonist, for once?”, they cry, completely without irony. Meanwhile, the progressive side of fandom is frustrated that the protagonist is, yet again, a white woman, and it is with this crowd that I, unsurprisingly, throw my sympathy.

While Rogue One hasn’t taken the extra egregious step of whitewashing previously PoC characters like some upcoming films have done (looking real hard at you, Ghost in the Shell and Doctor Strange), it’s not false that the Star Wars universe has, both recently and in the past, equated diversity in casting to ‘white women and men of color’. In a universe far distant from our own concepts of race, there’s nothing about Jyn Erso’s character that necessitates her whiteness, and in a franchise known for plucking relative unknowns out of the ether and rocketing them to international superstardom, this could have been a chance to get some actresses of color into the spotlight. 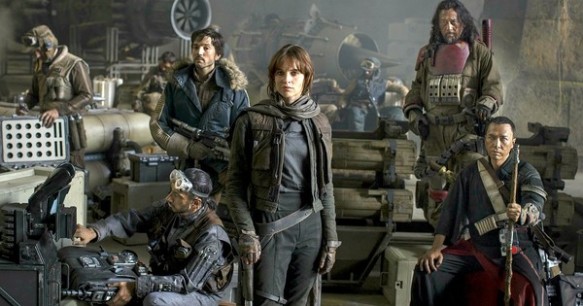 It’s easy for white people to talk about “baby steps” in representation, and it’s something that I myself have been guilty of. But it’s not okay to keep telling women of color, implicitly or explicitly, that their stories don’t matter, or are more complicated and difficult to understand than those of people who are only part of one marginalized class. That it’s okay to have white women or men of color but meeting at the intersection of those oppressions is some 201-level stuff that the populace at large aren’t ready for. That the acting contributions of women of color are to be relegated to the background of a scene or hidden behind a CGI alien, keeping them from any meaningful visual representation. Rogue One certainly isn’t the only film (or media in general) guilty of doing this, but it has rocketed the discussion back to the forefront of people’s minds.

I am still excited to see this movie, by the way; don’t get me wrong. But while I’m forking over my ten bucks, I’m not going to implore anyone else to; asking for solidarity in a way that only upholds white women is massively shitty. That said, a single teaser trailer does not a fully formed and completed movie imply. Maybe they’ll change something after taking the reaction into account. While it’s highly unlikely that they’ll change the casting of their lead based on fan commentary, it’s still important to speak out and let them know that they can’t keep playing this game.