Supergirl’s first season wrapped up this week, and I find myself sad at the prospect of waiting until October to see a continuation of the story. Over the past twenty episodes, Kara Danvers has become everything that I ever could have wanted in a superhero. While she has super powers like her cousin, her character’s strengths come from her ability to inspire hope in people, and that’s really what makes her a superhero. Supergirl is a show filled with feminist themes, awesome and intriguing characters, and some really good messages.

The first season chronicles Kara’s fight against her aunt Astra and uncle Non. Astra and Non were both eco-terrorists back on Krypton. They foresaw the planet’s destruction and believed they could stop it by initiating something called Myriad—a planetwide mind-control device that would stop the Kryptonians from continuing to harm their own planet. However, they were caught and sent to prison and the Kryptonians attempted to hide Myriad because it could theoretically be used to enslave whole worlds. Now that Astra and Non are free on Earth, they believe the planet will die just as Krypton did. As such, they reprogram Myriad to work on humans and plan to set it loose on National City.

Astra eventually changes her mind about using Myriad, but her death at Alex’s hands pushes Non over the edge. Unaware of Astra’s change of heart, he goes through with the plan, leaving Supergirl to team up with both Cat Grant and Maxwell Lord, who are immune to the effects, to stop him. They do this by sending out a broadcast of Supergirl so she can speak to the people of National City. Her message of hope inspires the people to break free from Myriad’s control. Enraged, Non instead plans to murder all of humanity instead. Kara manages to stop him, and the season ends with J’onn J’onzz being pardoned for his past crimes, Kara receiving a promotion at work, and another Kryptonian crash landing on Earth.

All in all, I loved Supergirl’s first season. The story had a fairly strong start and unique take on perceived social constructs. Almost every episode featured women supporting each other and playing a variety of roles, and the “friendzone” storyline also offered a twist that we almost never see in media—Kara rejected Winn as a romantic interest, and then, shocker, they kept being friends regardless.

What I love most about Supergirl is the tone and how Kara comes to be a hero in her own right. This television show is what the movies should have been like. Whereas Man of Steel is dark and brooding, just like Batman v Superman, Kara’s character is allowed to be a person first and foremost. She’s compelling in a way that the movie characters are not, because she’s allowed to have conversations and friendships with people. We get to see her be happy and learn what brings her joy—her friends, family, and belonging—and so when Kara has her moments of doubt and sadness, it feels all the more real. Supergirl doesn’t beat us over the head with its own lesson on morality and instead focuses on characterization. As such, the messages Supergirl leaves us with have more meaning than the movies ever had. 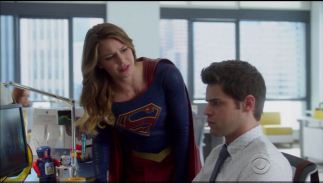 The season starts at the beginning of Kara’s journey into superherodom, and that allows us to learn how she resonates with National City and how she inspires people. After Kara is eventually exposed to red kryptonite and spends an episode being evil, she loses the trust of the citizens around her, and it’s only after she risks her life a few episodes later that the people accept her back as a hero, and in turn risk their own lives to keep her safe. Despite Supergirl’s heroics, she has her flaws and we do see her misuse her powers even without the red kryptonite. Maxwell Lord spends the season as her antagonist, and being a dangerous scientist, Supergirl has him locked up in the DEO without a trial. It’s only through her friendship with James Olsen that Kara realizes how wrong this was on her part and has the DEO release Lord.

In the course of just a few episodes, Supergirl not only brought up but also answered the questions both Man of Steel and Batman v Superman raised and then refused to answer: can power never corrupt and is Supergirl really a superhero? Supergirl shows us that Kara’s not a hero because she has awesome powers, but because she genuinely cares about others and can reach people on an emotional level. Supergirl recognizes that Lord’s villainy is driven by his fear of her and what she can do should she ever go bad and that Astra’s driven by her fear of what happened to Krypton. Kara doesn’t see herself as a savior of National City, but as someone inspired by the people who live there, and this allows the non-super-powered characters to be just as heroic. Kara listens to other people, takes their advice, and couldn’t be a hero without them. Cat Grant, her mentor figure, lets Supergirl know that some of the worst decisions ever made were driven by fear, and it’s only through this conversation and realization that Kara, Cat, and Lord are able to save the city from Myriad without any losses.

Supergirl is not without its cheesy moments and the occasional contrived plotline, but on the whole, this is one of the better superhero shows I’ve seen. The first season was a lot of fun to watch, had some really great stories, and it also had its own messages that felt real and not forced out. If you haven’t been watching this show, you should go get caught up.