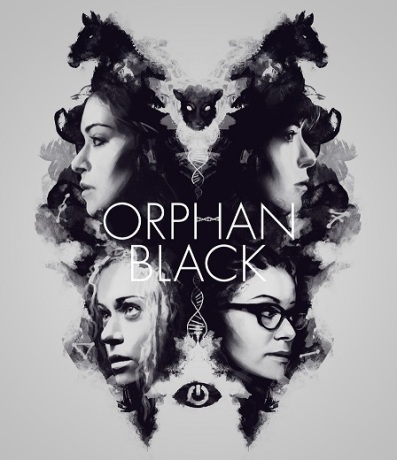 If last week’s season premiere was a bit of a prequel, this week we’re back with Sarah Manning (and company) in the present. Last season the plot progressed into complication after complication, adding a whole new set of clones. With Season 4, it seems like we’re traveling back in time, down through the rabbit hole, back to the beginning. Two episodes in, it seems like a good choice. So what are Sarah, Alison, Cosima, Helena, and the lot up to? 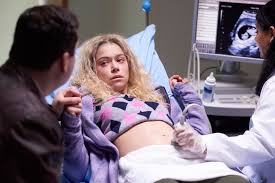 Let’s start with Helena and Alison, because things are going to get weird later. Helena’s living with the Hendrix family, and poses as Alison when Donnie takes her to see the doctor for an ultrasound. Surprise! Helena’s carrying twins! Identical twins, because they share a placenta. The news upsets Alison, who seems to be (quite understandably) jealous, despite insisting that she’s overjoyed. Donnie reminds her that Helena wants to be just like her, and this seems to mollify Alison. He leaves her alone in the crafts room and Alison picks up a picture of Helena’s sonogram. It’s clear that her feelings are much more complicated than either Alison will admit or Donnie seems to realize, but knowing what we know of Alison, I think she’ll soon enthusiastically embrace her role as an auntie (or at least feign enthusiasm). Family is a big underlying theme of this episode: who counts, who doesn’t, and what we hide from our families.

Felix seems to be burnt out with his foster family’s clone shenanigans, especially since we now all know that Sarah is actually related to Mrs. S by blood (sort of? Is a clone derived from your mother technically your aunt?). So Felix wants to find his biological parents. Honestly, I’m just surprised it took him this long. He worries about breaking the news to Sarah and Siobhan, and when he tells Sarah, she doesn’t understand. For her, Felix has always been an authentic part of the family, and she’s confused about why he would need anyone else. It’s a pretty selfish reaction, with as much time as she’s spent down the rabbit hole of her own genetic origin and finding and building relationships with other people who share her genome. But it’s also understandable: maybe Felix’s search for his genetic family will get Sarah to stop taking him for granted.

Cosima’s got a new lab in the basement of a comic-shop-turned-safe-house called “The Rabbit Hole”. Apparently our writers don’t do subtlety. The lab’s populated with lab equipment that she and Scott stole from Dyad before it was totally shut down. She’s got her own medical grade marijuana garden, but it only seems to help with bringing her appetite back. Cosima’s not doing well, and we hear that she can’t start any other gene therapy while she and Scott are fine-tuning the one sourced from Kendall Malone. Kendall, it turns out, has leukemia and is hiding it from her family so they don’t treat her with kid gloves. Fair enough. Except some forms of leukemia are rooted in changes to DNA itself. What does this secret mean for Cosima’s hope for treatment? Regardless, it’s clear that Kendall isn’t getting any kind of aggressive treatment right now. Who knows how long she has.

We catch up with Sarah in Iceland, at the beginning of the episode, and somehow Neolution has caught up with her family. The women escape as Siobhan torches the place, but Cal is conspicuously missing. When they make it back to the mainland (to The Rabbit Hole), Sarah goes off to track down our new clone, M.K., and find out more about her, Beth, and what’s going on. She and Art go to Beth’s old apartment and discover surveillance footage, and soon, Sarah leaves to track down M.K. and find out who the mysterious pregnant woman with the Neolution white iris is, while Art continues to watch the footage. Sarah goads an annoyed Felix into checking out the Neolution club with her, and she meets a man (who thinks she’s M.K.) who shows her footage of a worm extraction from a man’s cheek. Sarah meets up with M.K., who implores her to let it all go. Before Sarah can leave, the two “paramedics” from last episode corner her and examine her cheek. They realize that she’s Sarah Manning, and leave. Sarah, in a panic, goes home and Siobhan calms her down enough to shine a flashlight through the skin of her cheek. We see a tiny, living worm, no doubt implanted while she was imprisoned by Dyad—something very, very wrong, and we have no idea yet what it is or why it’s been given to her.

While we’re still early in the season, we should take a look at the episode titles. Every season takes its episode titles from some notable work or collection of works, and sets the tone of the upcoming season. Season 1 was Darwin’s Origin of Species, Season 2 was the works of Francis Bacon, and Season 3 (with the addition of the militaristic male clone line) was from Dwight Eisenhower’s farewell address. Season 4’s titles come from the works of Donna Haraway. Haraway is a Distinguished Professor Emerita in the History of Consciousness Department and Feminist Studies Department at the University of California. One of her most famous works is entitled A Cyborg Manifesto: Science, Technology, and Socialist-Feminism in the Late Twentieth Century. No wonder we’re spending more time with Neolution this season. Haraway uses cyborgs as a metaphor for women moving beyond gender, politics, and other traditional limitations. Some more traditional feminists criticize Haraway’s work for claiming that “there is nothing about being female that naturally binds women” together. Could this mean that Clone Club might splinter this season? Haraway argues that connections should be based on “affinity”, or whether or not you like somebody, and not on things that are “essential”, like gender or genes or nationalism, etc. This ties nicely with our themes of family and familial relationships. Is family who you make it, or is family who’s genetically similar to you? Is the worm thing going to make Sarah a cyborg? Where the hell is Cal, anyway? Tune in next week, Clone Club.