Readers, life is great! The Rogue One trailer was cool, Captain America: Civil War was awesome, and there is a brand new set of Splatoon based Amiibo. Included are a set of the Squid Sisters who are very adorable, and a recolor set of the original girl, squid, and boy. Imagine my excitement when I saw that the new palette for the boy was a Black Inkling! I was incredibly hyped. But then as I looked back at the girl Inkling, I made an unfortunate observation: there is a striking lack of women of color in a lot of our media.

Back when The Force Awakens finally revealed its actors, it was really exciting to see the diversity involved. There was a female protagonist with Daisy Ridley, we had Black men and women in the film with John Boyega and Lupita Nyong’o, and Oscar Isaac is Guatemalan-American. However, when the characters themselves were revealed, it turned out that Lupita was cast as Maz Kanata, which is a little yellow alien along the lines of Yoda. Although a voice acting credit is still a great opportunity, especially in a franchise as large as Star Wars, it doesn’t really increase the onscreen presence for women of color. (Lupita did choose this role, and far be it for me not to be supportive, but I still wish there were more visible roles available in general.) Guardians of the Galaxy followed a similar trend with Gamora. While she was played by a woman of color, the character was a green space alien. The other female characters in this movie mostly amounted to the leader of NOVA, who was played by a white woman, and Nebula, also played by a white woman.

Coupling this erasure with the previously mentioned Rogue One and Splatoon toys, it seems as though nerd media’s idea of diversity is white (often British) women and men of color. And yes, while this does check both boxes of ethnic and gender diversity, sort of, it doesn’t do a whole lot in terms of intersectionality. Although various combinations of race and gender face different types of adversity (i.e. toxic masculinity stifling men’s expression in the Black community doesn’t affect Black women quite the same way) it is difficult to say that women of color don’t face a particular double dosage of discrimination and hardships. For example, we all know that women are disproportionately expected to have a good physical appearance. Women of color face the added difficulty of not completely fitting white beauty standards. Keeping them out of movies by either relegating them to voice-acting roles, or changing their skin to something alien, enforces the mindset that their presence is largely unwanted. It also pushes the belief that only white beauty standards for women should be on the big screen.

The YouTube announcement had many “Squigga” jokes. I wasn’t pleased.

Companies shouldn’t get to claim to be bastions of diversity when they can’t represent an entire portion of their audience. The Marvel Cinematic is particularly guilty of this. Beyond the example of Guardians, the ever expanding group of Avengers is devoid of women of color. Sure, we have three Black guys on the screen (problems aside), but where are the Black women? Better yet, where are the women of any group of color? Their show Agents of S.H.I.E.L.D.’s main protagonist Daisy Johnson is half Chinese, and her mentor is played by Ming-na Wen, but this is a television show rather than a big-budget movie event. I suppose this is why I take pause with considering a potential Black Widow standalone film to be a huge feminist victory. It will definitely be progress, but with the upcoming (eventually?) Captain Marvel film and Wonder Woman film on the DC side, it feels like women of color will be left on the sidelines again. This only perpetuates the idea that they can’t be part of our teams, let alone lead their own.

Some companies are doing it right. Steven Universe primarily focuses on a white boy, but he shares the spotlight with his team/family, the Crystal Gems who mirror various cultures. Garnet is commonly coded as Black, and Amethyst gets coded as Latinx. But they are still aliens. Luckily, the community they live in is very diverse. The owners of Fish Pizza are Ghanaian and Steven’s best friend Connie’s family is Indian. Both of these families are seemingly led by women too. Another franchise that is doing a surprisingly good job is Mortal Kombat. Despite some of its problems—they have a history of over-sexualizing their women but they have slowly been getting better with it—there is some real world diversity at play. It’s hard to determine what ethnicity the more alien women represent—it could be anywhere from Asian, to white, to Black, to more fantastic imaginary ones—but there are human women of color in the cast, such as Jacqui Briggs, Kitana, and Jade. 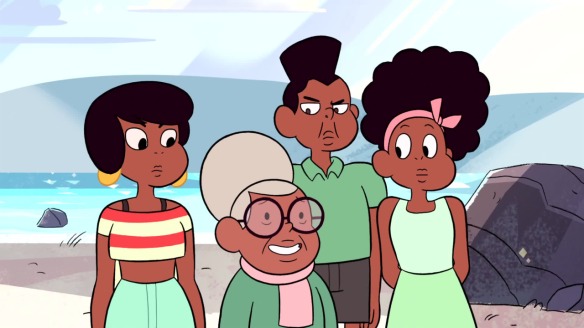 Arguably the most normal family in Beach City.

I think companies can add women of color to their properties really easily, and they absolutely must. These women exist in real life; they should on the screen. Additionally, it doesn’t make scientific or statistical sense for there to be only men of color in the universe. The justification is hardly necessary though. There are characters of color to choose from if we’re creating adaptations, and there is nothing stopping original works from having women of color. Representation matters, and it’s about time creators started better mirroring the world we live in. If we can have green space women, we can certainly have women of realistic skin tones.

4 thoughts on “There Are No Women of Color in the Galaxy?”