Sometime as I was reading the Song of Ice and Fire books a few years ago, just when Game of Thrones was getting popular and more and more fans were starting to fight over who they thought would be the best person to end up on the Iron Throne, I started wondering, “Wait a minute. We live in a supposedly democratic, meritocratic society these days that (at least nominally) no longer believes in hereditary rule. Why are we so invested in seeing an autocratic, hereditary tyrant installed on a throne, to lord it over our favorite fictional continent? Shouldn’t we be rooting for the Seven Kingdoms to become a democracy instead?” (I’m on Team Dany, by the way!)

And have you ever thought about how weird it is that, in Sailor Moon, we’re supposed to be happy that Usagi and Mamoru end up as Neo-Queen Serenity and King Endymion, absolute rulers of the entire freaking Earth for over a thousand years? The narrative presents this as a positive thing because they’re such just and peaceful rulers, and those who question Neo-Queen Serenity’s rule are presented as the villains.

This should be absolutely terrifying. Just sayin’.

As I began thinking about this further, I realized that a lot of our modern media is still in the habit of over-valuing noble blood. It makes sense that old fairy tales feature lots of royalty, secret royalty, and marrying into royalty, because back then, that was the best possible situation people could imagine for themselves. But why does this obsession still exist today when kings and queens with real power (for the most part) are not prominent anymore? You also may be wondering, what’s the harm of featuring noble-born characters? I would argue that they reinforce the false idea of privileged birth translating to inherent “special-ness,” as well as ignore the stories of those born into less privilege.

Let’s examine this in several examples below the jump!

I’m starting with Lord of the Rings, which may not count as modern media anymore, but it’s still very much in the public eye with Peter Jackson’s recent film adaptation of it and The Hobbit. Tolkien’s world in general is chock-full of superiority assigned to characters based on bloodline. Elves who went to (and returned from) the “heavenly” realm of Valinor, such as Galadriel, are at the top of this hierarchy. These elves are depicted as somehow more stately and powerful than mere wood-elves, like the ones who live in Mirkwood.

The same pattern is repeated with the race of “men”, as they’re misogynistically called in Tolkien’s universe. There’s lots of talk in Lord of the Rings about how “true” the blood of Numenor runs in the veins of the various Gondorians we meet. Numenor was an ancient island kingdom where humans with elvish blood lived, until the god of Tolkien’s world sunk the island under the sea to punish the Numenoreans for their hubris. Some of the survivors made it to Middle-earth and established two new kingdoms there. The southern kingdom was called Gondor. The narrative lauds Gondor as the height of human culture, because sure, imperialism is great! Descendants of the Numenorean survivors lived in Middle-earth for generations, and over time, they intermarried with the “ordinary” humans there, thus diluting their Numenorean blood. The “purer” a human’s Numenorean blood, the longer they lived, the taller they would grow, and the nobler their demeanor.

Why is this so pernicious? It basically establishes one human race that is superior to all the others, and the narrative never questions this. Aragorn, as heir to the throne of both kingdoms (though only Gondor exists at the time Lord of the Rings takes place), has the “purest” Numenorean blood, and as a result, has a lifespan of a couple hundred years and even gets special healing powers that are basically magic. He’s considered the only one who can save Gondor, even though he’s never lived there. Gondor accepts him as king with open arms. 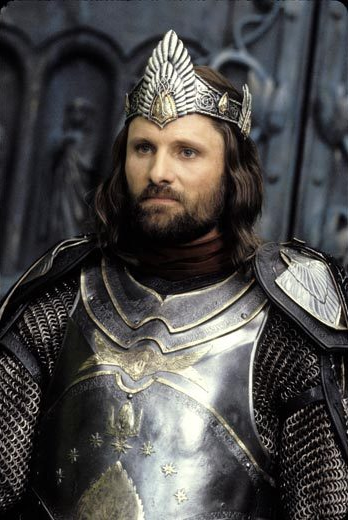 We have no idea who the heck you are. But here, have a crown. And a throne. And my axe.

Meanwhile, Boromir’s temptation by the Ring at the end of Fellowship is blamed on the fact that, though he is a Gondorian nobleman, the blood of Numenor does not “flow true” enough in him. His younger brother Faramir, however, is said to have inherited more Numenorean blood, and he is always depicted as noble and good. So here we have blood being the determining factor not just of right to rule, but also of moral fiber. It’s true that the hobbits are the exception to this theme of noble blood = goodness, and are arguably meant to be most relatable to the audience, but their presence does not mitigate the frankly racist implications of the Gondorians’ noble blood translating to inherent superiority (and this doesn’t even touch on the racist way in which non-white races of humans are treated in the book).

A Song of Ice and Fire (I’ve only read the books, but this applies to the show as well) is supposed to be a gritty reaction against the romanticism of traditional high fantasy like Lord of the Rings. Its noble characters are anything but noble; in fact, the narrative takes great pains to show us how morally corrupt they all are, with their murders and their whoring and their treachery. Even Ned Stark, arguably the most “moral” of our main characters, could be interpreted as causing a great deal of suffering to preserve his honor, at the expense of what we would view as moral.  But other than everyone’s moral failings, it’s remarkable how little A Song of Ice and Fire actually questions the “noble = special” trope. This starts by refusing to tell the stories of any commoners. While the books continually show us the suffering and discontent of the common people at the hands of the nobility’s power-grabs, none of our POV characters are common-born, except for Davos, but even he is dubbed a knight before the story begins. The story can hardly critique the way powerful families oppress the non-powerful if it doesn’t even give us the perspective of the latter. In addition, the story still contains examples of royal/noble exceptionalism; Daenerys can survive an inferno and has a unique affinity with dragons because she’s a Targaryen, and Westeros is depending on a “prince that was promised” to save it. Sure, sometimes our noble characters like Arya get thrown into impoverished circumstances in which they can no longer rely on their noble privilege, but what will it mean when these characters rise above those circumstances? We have no counter-examples, so it may just mean that they are only able to triumph because they have “special” noble blood. Could a commoner survive and accomplish what Arya has? We simply don’t know, because A Song of Ice and Fire doesn’t tell us. Essentially, then, the voices of the less-privileged are silenced. Don’t we already get enough of that in real life without it reinforced in our escapist fiction too?

Why do we want any of these assholes on a throne again? (Image via shardsofbards.tumblr.com)

But, you protest, little girls love princess stories! Princesses act as role models! Their transformation into their iconic princess dress marks their moment of acceptance of their own inner strength! But why do they have to be princesses? Why can’t a girl born into ordinary or even disadvantaged circumstances be a role model or have a transformation indicative of her inner strength? Yes, many of the Disney princesses were initially born into poverty, like Belle and Tiana. But they all end up marrying into royal families. Even Mulan, though she never technically becomes a princess, is still from a noble family. So modern princess stories still convey the classist message that either you have to be born into privilege to be “special”, or if you’re “special” enough, you’ll be rewarded by joining a privileged family. Disney has non-princess heroines like Alice, Megara, and Lilo, but they were never “inducted” as official Disney princesses, and are marketed far less. It implies that if you aren’t from the right bloodline (or don’t marry into it), then your story is not important enough to get high visibility.

This is why I’m kind of sick and tired of royal families, noble families, and “special” families of all kinds. We have enough stories about those kinds of people. They reinforce the toxic idea that you have to be born into privilege in order to be “special”. We don’t have enough stories, especially in medieval or faux-medieval settings, about the struggles of “ordinary” folks, of “commoners” who aren’t born with silver spoons in their mouths. That’s why I’m hoping Rey in the new Star Wars movies turns out not to be related to any of the legacy families we’re already familiar with. It’s important to convey the message that talent, goodness, and any other positive quality can be present in anyone, regardless of the circumstances of their birth. I’m baffled by this continued obsession with royalty and nobility when, in the United States, at least, we live in a culture that was partially founded on the idea that blood status doesn’t matter, that anyone can rise from anywhere to achieve the American dream. Obviously that is still truer for some people more than others, and yes, that has a lot to do with circumstances of birth like family income, race, gender, and sexuality. But if we want to overcome these barriers, why do we continue to inscribe them symbolically, and even applaud them, in our media?

So hey, are you currently writing a story about a member of a royal or noble family? Ask yourself why. Ask yourself if that character could be from a “common” family instead. We’ve heard enough from princes, princesses, lords, and ladies. They’re the ones who wrote our entire history up until the modern era, after all. It’s time we had some more class diversity, especially in our medieval stories.

7 thoughts on “A Noble Obsession”