Our community here at Lady Geek Girl and Friends is a tight-knit one, and as a majority queer group, we were shaken to our core by the horrible tragedy that occurred a week ago in Orlando. Our deepest sympathies go out to the victims and their families, and we urge those who can to take an active role in responding to it, whether through blood donation, financial aid, or political activism. In the wake of the shooting, the LGBTQ+ community has responded with vigils, with calls to action, and with affirmations of self-worth. Notably among the latter is the #queerselflove hashtag, started by Welcome to Night Vale actor Dylan Marron on Twitter.

I am a soft-spoken brown queer man who wears his mother's pearl earrings. And I love my queerness. Let's start a #queerselflove hashtag

The hashtag quickly took off as the wounded queer community took the time to reflect on what made us special and important. In response to a hate crime, we told the world that if it was not going to love us, we were still going to love ourselves. I contributed my own personal #queerselflove to the tag on Wednesday night, but today I’d like to talk about a few of my favorite happy LGBTQ+ people and pairings in pop culture. We’ve spent so many posts recently condemning the treatment of queer people in fiction and this post isn’t meant to erase or negate those. Indeed, the importance of meaningful queer representation is more important than ever in a time when the gays we’re burying are no longer fictional. Queer people need to be able to look to something and see ourselves being happy.

Steven Universe’s Ruby and Sapphire’s love for each other is so pure that they spend almost all of their time fused into one being. (There’s no one on the planet I love that much, so I consider that pretty impressive.) Garnet is a person, but she’s also a physical manifestation of their love, and it’s plainly and unequivocably presented as romantic love. They’re physically and verbally affectionate, as well; unsexualized queer female romance is so rare (and the two of them are so cute) that this never fails to warm the cockles of my icy heart. From a more meta perspective, also, it’s important to note that they’re characters in a show whose intended audience is children; it makes me happy that the next generation is being exposed to a story with this kind of epic and important queer love.

Nico di Angelo from Rick Riordan’s Percy Jackson universe is important to me for reasons along the same lines. While Nico has never been the protagonist of any of the books, he is easily the most well-developed and complex character. However, he spends ninety-five percent of his pagetime before the most recent book in some kind of mortal danger or serious angst. His realization that his attractions didn’t make him flawed inspired a serious turnaround for my precious, death-scented son. Nico’s character in The Hidden Oracle wasn’t indistinguishable from that of previous books, but he was clearly changed. He is comfortable in his skin and his powers; he no longer struggles as much with his sense of self-worth. Getting to have the same sort of cheesy but emotional teen dalliances as the series’ other characters has brought out a clever, snarky side of Nico that he was once too lost in self-hate to embrace. 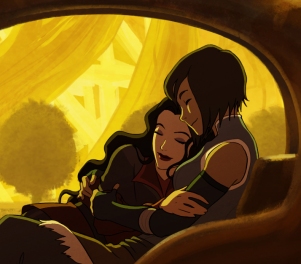 Korra, too, fights a long, uphill battle against her demons. For four seasons she deals with everything from assassination attempts and spiritual warfare to petty teen drama and heartbreak. She deals with serious PTSD and anger issues and is able to learn to cope, in part because she becomes closer to Asami. The transition of their relationship from platonic to romantic seemed like a natural direction for the story to take, and I’m so happy it did. We don’t know much about the existence of homophobia in the Avatar universe, so Korra may not have had to go through the obstacle course of judgment and self-doubt that real-world queer people often navigate when coming out. However, her happy ending was unequivocably tied up in her embracing her queerness, and that sounds right in line with the #queerselflove sentiment.

Angela and Sera from the current Marvel 616 universe are up there with Ruby and Sapphire as one of the most heartwarming queer couples I’ve ever seen. They’re genuine storybook heroes, going on epic adventures, staging coups, and overthrowing realms—and they’re also disgustingly sappy girlfriends. The inclusion of a queer romance into a super high-fantasy story lets me see people like me in a story that isn’t about their queerness. The normalization of a couple that is queer, interracial, and includes a trans woman is so important, and more importantly, they’re happy and as safe as two women who regularly fight helhounds can be.

Finally, it would be remiss of me to mention this without bringing up Cecil and Carlos, given the hashtag’s creator. Cecil and Carlos, like Korra, seem to exist in a universe without homophobia; instead, irrational fear and prejudice are properly relegated to irrational subjects like brothers-in-law, dog parks and their inhabitants, and angels. What brings me comfort about their relationship is that amongst all the nonsense that goes on, the two of them struggle with and revel in utter, boring, day-to-day relationship stuff. StrexCorp is taking over Night Vale, yes, but whose turn is it to do the dishes? Carlos, can you pick up something for dinner that doesn’t include wheat or wheat by-products? Night Vale is weird and dangerous and scary, but Cecil and Carlos are happy and safe with each other.

In the end, I’d argue that being able to find solace in representation can be just as affirming as going through the Twitter hashtag and feeling buoyed by the bravery and honesty of so many members of the LGBTQ+ community. These characters and the way they have overcome their struggles and found meaningful relationships give me hope that I too can do so, and if there’s one thing I could use right now, it’s a little hope.