Recently I have been embracing my queerness more and more. I’ve always been open and proud about my pansexuality, but circumstances have made it so that I couldn’t be as out and as proud as I wanted to be. For example, even now I can’t talk about or even mention my sexuality at my job, or I could be fired—the hazards of working for a Catholic church. I was nervous about going to my local Pridefest because if someone saw me I could have lost my job just for attending. This is an obstacle that is sadly still in my life, but other obstacles have since fallen away. Before this, I hadn’t come out to my father; however, I have now, with thankfully very few obstacles. I have also been engaging more with the queer community: something I was previously afraid to even attempt because of how prevalent I heard the bi and pan-phobia was in the community. But so far, to my delight, I haven’t personally encountered any such issues. Now I can be somewhat more open in my life, and the recent Pulse shooting prompted me to be even more open in defiance of all the hate. Together, this all has led me to want to engage more in the queer community and queer culture.

Of course, being a nerd, I naturally wanted to look into queer stories in sci-fi and fantasy. Sadly, as you can guess, there are very few.

I first want to make it clear that when I say that I am looking for speculative fiction (sci-fi and fantasy) stories that are also queer stories, I don’t mean stories that have queer side characters, but rather stories where the main character is queer and any romance is focused on queer relationships. I’m tired of queer characters being relegated to sidekicks and queer romance being pushed to the sidelines so that the heterosexual couples can have the main story arc. I’m tired of seeing queer characters killed off, which is worse still. I don’t think it’s too much to ask to want a story where the main character is a queer space pirate or a trans fairy princess. And, as always, neither am I looking for stories where a character is defined by their sexuality. I just want similar stories to the type straight characters get.

This doesn’t seem to be in the cards, however—it seemed the more I longed for queer stories in speculative fiction, the more disappointed I would get. It started with me listening to Alice Isn’t Dead, a wonderful podcast from Night Vale Presents about a female truck driver who is traveling across the country looking for her missing wife, and along the way encounters many strange and mysterious things. While I love Welcome to Night Vale, which also features queer main characters, I reveled in Alice Isn’t Dead because I was so thrilled to have a female queer character in the lead role.

Afterward, I started looking for more speculative fiction with queer stories. Naturally, the first places I turned to were Hulu and Netflix: both sites I knew had a whole section labeled “LGBT”, so I thought I would be able to at least find a few things there. However, not only were both sections relatively small, but there were no speculative fiction stories that I could find. I was limited to rom coms, dramas, and reality TV, which was great, but not what I wanted. I was finally saved from my search when I was given a copy of the comic anthology Smut Peddler. Smut Peddler is a collection of erotic indie comics created by a variety of writers and artists designed specifically for women and featuring stories that center around people of all types of sexual orientations. And though it does include heterosexual couples, the stories are overwhelmingly queer. I fell in love, instantly devouring the comic, but even still I was disappointed that so few of the comics were speculative fiction. While there were comics that did feature sci-fi or fantasy settings, I was more than a little sad that the majority of the comic book wasn’t that way. 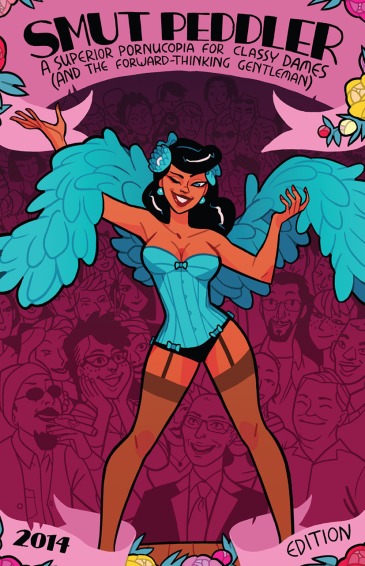 Why is this important? Why do I care that there seems to be a lack of speculative fiction that has queer stories? Well, it’s important for a variety of reasons. After the Pulse shooting, I didn’t want any movies that were based in reality. I wanted to escape to some magical isle where being queer wasn’t an issue. Or, in the case of science fiction, I wanted to be able to go far into the future, into outer space, where I could meet aliens that didn’t care that I was pansexual. Or even better, where I could explore a future where homophobia of any kind was a horrible tragedy of the past, but not in any way a reality in the show. Speculative fiction, unlike a lot of other fiction, has the capacity to ignore the often problematic reality of this world. Speculative fiction can fix it, make it better, can give those consuming the story the opportunity to enjoy a world where they don’t have to hide, where they can be the hero, where the epic romance for the ages isn’t strictly heterosexual. We need more queer stories in speculative fiction desperately. And I am aware that many of you will probably comment with stories and TV shows and other things that I haven’t read or watched, and this is exactly what I am looking for. I can’t wait for those comments. It is also annoying, however, that I have to go searching for such things. I have to go on a quest to actually find speculative fiction with queer stories. However, any hetero person can pick up almost any book on a shelf or turn on almost any TV show and find a hetero hero with a hetero romance. It’s a frustrating reality and one that I hope will change as we as a society become more accepting of others.

7 thoughts on “We Need More Queer Stories in Speculative Fiction”