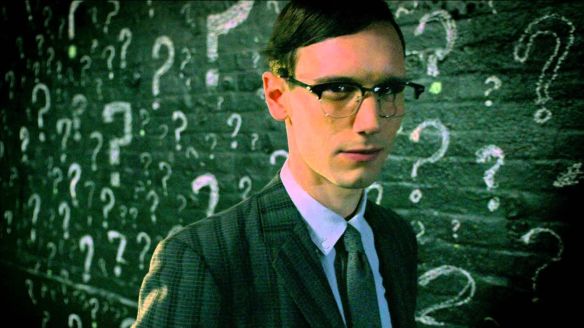 Recently, for whatever reason, I decided to go ahead and give Gotham Season 2 a watch. Regardless of my feelings on the show as a whole, the experience nevertheless left me in yet another mood to seek out more Riddler. As such, I set out to revisit some of my favorite fanfics, and so I bring to you Human Decency by crowsnest.

Human Decency takes place in the comic’s universe, sometime after Edward has gotten better and been released from Arkham. Now working as a private investigator, he gets a surprise visit from Batman telling him to take a case from one Mr. Wayne. Sure enough, Mr. Wayne shows up on his doorstep the next day. Gilda Dent, Two-Face’s wife, has gone missing, and as she’s a friend of Bruce’s, he wants help figuring out what happened to her. Edward takes the case—after charging the billionaire extra—but before he can get to work, Bruce insists that he tags along, much to Edward’s annoyance.

Eventually, all clues lead to the two of them heading outside Gotham and having to climb a mountain up to an abandoned correctional facility. Unfortunately, after only one night out in the woods together, Edward discovers Bruce’s secret identity.

Wayne—Batman, whoever he actually was—gripped my shoulder and shoved me back toward the campsite. I stumbled along; he had no problems in the dark, but I was aching from the abuse he’d dished out. He marched me back to camp, shoved me under the tarp, and pushed me down. My body ached, but my libido got the entirely wrong idea about my blood being up and some pushy treatment. Not now, dammit, this is definitely not Lilah! That was added humiliation I didn’t really need right now.

“How much do you remember?” he asked; even keeping his voice low, his words rang with the authority of the Bat.

“Enough that I know an elephant’s going to sit on my fence if I don’t keep my mouth shut,” I replied, trying not to sound snippy and failing. My face surged with pain with every word.

“Bits and pieces. It’s a puzzle I don’t waste too much time on.”

“You, turning down a puzzle?”

“Yeah, I know. It’s like I’m not ruled by a damaging compulsion anymore!” I snapped. He always got my temper to rise—like a dumb animal, snapping at bait.

Eventually, the two of them do find Gilda and learn that she willingly went missing. A reformed Harvey Dent is back in her life and she wants to be with him. However, as he’s a wanted man, that means living a life on the run. All in all, though, the fic does have a happy ending. Gilda’s safe and happy where she is, and Bruce’s and Edward’s characters are explored in interesting ways. Bruce goes to Edward for help because he knows Harvey is more than likely involved in Gilda’s disappearance, but since Two-Face and Batman have a pretty rough history, he can’t approach the ex-rogue as Batman. Bruce still cares for Harvey as a friend, but he has to reconcile that with Two-Face’s own actions against Batman.

For Edward, his character struggles to get through this case while navigating Bruce’s involvement. At first, he thinks of the playboy only as the person he reads about in the tabloids, but realizes as time passes that that is all an act. He still struggles with riddles and the trauma he went through at Arkham—finding Gilda in an abandoned correctional facility brings back a few hard memories—while attempting to move forward with his life, which is no easy feat considering his history. He also on occasion has to put up with his own attraction to Bruce Wayne. Human Decency features a bisexual Riddler and while this story is not a romance or hookup fic, his orientation still informs his character.

Human Decency is a oneshot around 18k+ words, and if any of you are interested, you can check it out here.