I really enjoy the Kickstarter platform, and I have a lot of faith in crowdfunding as a concept. Despite there being disappointing results from time to time, I don’t think that is a fault of the service. I’ve backed a few projects that have gone well, and I’ve seen even more projects succeed and please customers. Alternative funding methods help more interesting stories and concepts come to life. One such concept is this week’s Web Crush: Ikenfell, a role-playing game about witches, wizards, their school, and their adventures.

For disclosure’s sake, I have backed this project.

I found out about this game one night browsing Twitter, because part of the musical duo behind much of Steven Universe’s music, aivi & surasshu, mentioned that they were working on this game. Music is one of the best parts of that show. So as a fan, I had to at least pop by and see what was up. Per my prediction, the music in the preview trailer was excellent; no surprises there. (I’ll get back to that shortly.) Luckily, a great looking game was attached.

The story is focused on Maritte, a girl with no magic powers, who is on an adventure to the Ikenfell school to find her sister. The sister in question, Safina, had quickly become the school’s most infamous student, but did not return home one summer. The suspicion surrounding the disappearance was only increased by how quiet everyone was being about an occurrence there. This narrative seems straightforward enough, and it has a nice amount of intrigue to give it interesting turns without feeling convoluted.

Ikenfell utilizes a pixel art aesthetic that would look at home on a Gameboy or Super Nintendo. That’s not for everyone, of course, but I’m a huge fan. The school they inhabit is colorful, as are the menus and dialogue boxes. These speech boxes are also accompanied by more detailed portraits of the characters, giving them more color and personality. Despite low resolution artwork in some cases, each character looks unique and distinguishable. You can really sense the game’s personality through its art. It feels reminiscent of the Gameboy Zelda games and Earthbound without feeling like a ripoff of them. Earthbound is listed as an influence, but it doesn’t seem to be a template.

As I said before, the music in the trailer is very lovely. It has the Steven Universe vibe, if you’re familiar with the series, and it doesn’t feel out of place here. It’s sort of a boppy, jazzy feeling, which enforces the magic tone to me. The piano and synth notes strike a juxtaposition that mirrors magic fiction: something real with something artificial (or fake). aivi & surasshu fit right in as the composers and sound designers for this project. 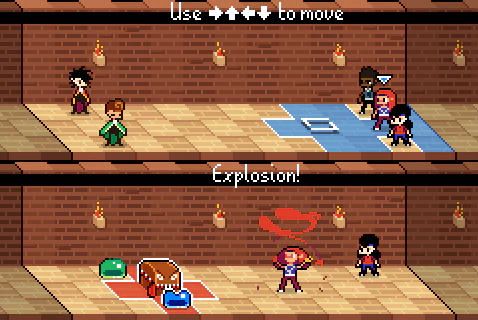 However, the battle system is what really pulled me in and intrigued me. All the aesthetic stuff is totally up my alley, but the battle systems look really engaging. The magical duels consist of turn-based and timing-based attacks on a grid. It appears that different attacks have various ranges and effects. The video makes it look as though a deep level of strategy is possible, which makes me very excited. Besides battling, there is a heavy emphasis on story and character relations. A marriage of compelling gameplay and compelling storytelling seems to be a good recipe for a great game.

Lastly, I’m just happy to see more female protagonists. This goes without saying, really, but more diverse stories are better for anyone interested in the medium. This seems like it will be a nice addition beside the Harry Potter franchise in the fandoms of magical teen fiction, in the sense that the premise is similar (magical school) but different (the main character is non-magical, and specifically sets out to rescue someone). Ikenfell looks really exciting, and if you agree, I recommend you check it out. I’m not one to tell people how they should, or shouldn’t, spend their money, but I do encourage you to follow the game’s progress regardless of what decision you make.

You can find the campaign on Kickstarter, the designer on Twitter @ChevyRay, the artist at hrpixelart.com, and the composers at aivisura.com. 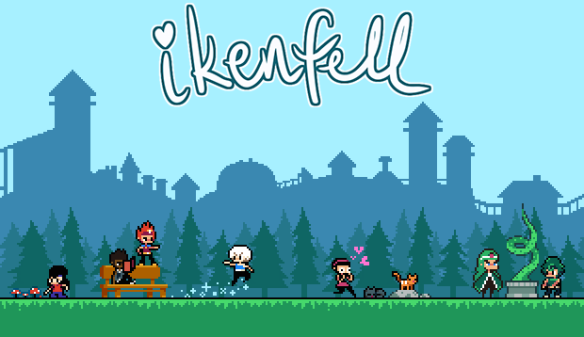