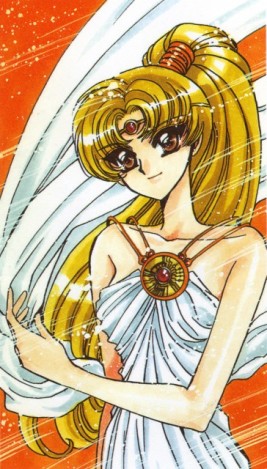 Magical girl anime and manga have been around for what seems like forever and have meshed with several other genres outside of their shoujo roots. Recently—for seemingly no reason—I was reminded of Magic Knight Rayearth, a magical girl series that combines the transformations and magic we all know and love with the sort of impending doom one might get from a Final Fantasy game, with a dose of giant robot anime on the side. The three protagonists—Hikaru, Umi, and Fuu—journey to a land called Cephiro to become the Magic Knights to save its Pillar (aka: Princess/Priestess) and learn how to harness their magic and mechas along the way, but the functionality of Cephiro’s magic is more explored through the series’s side characters (which makes sense, since the three heroes are from Earth and not Cephiro). While for the most part the magic is your typical elemental/summoning fare and the series utilizes several genre and character tropes, Rayearth does manage to surpass the limitations of some of these tropes. In the case of the character Presea, an older woman in a series focused on younger women, I found this to be especially true. Through both her character and her personal magics, Presea manages to become her own person rather than a character defined by her presumed role in patriarchal tropes.

Early on in the Magic Knights’ adventure, they come across a weaponsmith, Presea. In order to gain weapons worthy of the fabled Magic Knights, the girls must travel and retrieve a mystical ore called Escudo. Upon doing so, Presea works her magic: she turns the ore in its raw form into weapons by… dancing… or something. The process isn’t exactly clear from the manga panels. 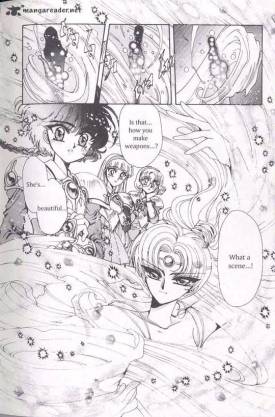 I mean, I guess whatever works for you…

Comparing this magic directly to the Magic Knights’ magic presents a jarring contrast. As expected, the Magic Knights use their magic in a much more offensive way, which is to say they use their elemental affinities to attack their foes. Additionally, as the girls power up, they gain more armor; at their strongest, they ride inside of an ancient giant robot. But Presea’s magic is only ever used to create, and create discriminately—each of her weapons are made for one person in particular. And, strangely enough, though she is typically armored, when creating her weapons she, too, transforms, but appears wearing a white, flowing dress.

Though I was tempted to assume this costume change was because of fanservice, Rayearth’s creators, CLAMP, have never to my knowledge presented their characters in the more perverted fanservice-y ways that immediately come to mind, and especially in a series like this, it would be entirely out of place. So then, could there be a reason for this? Of course, it could simply be because it looked fantasy-ish and pretty, with no other meaning behind it, but I see it in a different light (albeit Western and probably not what was intended).

The tropes surrounding women even in modern day media are numerous and persistent, but the one that continues to hang on like a stubborn leech is the virgin-whore dichotomy. This mindset is especially present in shoujo, where the “good” protagonist is almost always exclusively shown as kind, ditzy, brave, and/or pure, and the antagonist tends to be bitter, without true friends, and pretty in a way that seems more mature (darker colors, sleek lines, etc.). This is taken a step further in many shoujo by adding ageism into the mix: the young, pure protagonist overcomes a cruel older woman who wields her sexuality like a weapon. In some ways, Rayearth still profits off of these tropes—one of the main bad guys in the first arc was your typical nonsensical female armor type, and even the Pillar transforms into an older, more developed body when she turns evil—however, it manages to overcome these tropes by having the “pure” protagonists still lose in the end. I’d like to think that the presentation of Presea and her magic was also some sort of attempt to overcome these tropes.

Rayearth’s cast is full of older women, but they all, outside of Presea, approach the main characters in a violent manner at first. Presea, however, is not a woman whose age has made her bitter, or a woman whose heart has been twisted by love gone wrong. Yet she is not “pure” in the sense that shoujo heroines typically are. She is also not a mother figure: while Presea is there to aid the girls, she’s not there to guide them. While she cares for people, she also has a malicious streak that anyone can become a victim of. So in the end her magic reflects this part of her and cracks the tropes apart. Presea no longer has the innocence of youth, yet she still can wear an angelic white dress, and her magic can remain non-combative and non-damaging. However, her magic gives birth to things that can destroy, not out of bitterness or revenge, but because that’s simply what weapons do. 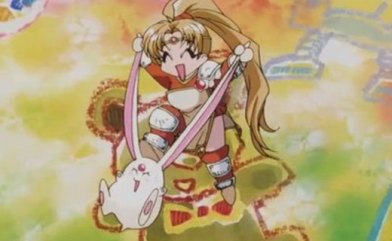 In the land of Cephiro, magic and magical power is completely driven by the strength in one’s own heart. While the Magic Knights have the righteous fury coursing through their magics, Presea’s magic is much more subdued and mundane. However, this shows a different possibility for ladies in shoujo. A woman’s heart doesn’t inevitably turn “evil” after she turns into an adult, but this also doesn’t mean that she must become some self-sacrificing mother figure who weeps for the world and the girls who must suffer through it. Instead, she can be a badass with the wisdom to help the girls who come across her, and sharpen her blades with the faith she still has in goodness and love, despite the hardships she’s been through.