The release of the Ghostbusters reboot has proven to be a fascinating experience. Even as someone who tends to be a little hard on hyped-up new releases, I felt that the movie itself was a lot of fun and pretty well put together, but the public response to it has been widely negative. Internet hearsay the day of the release told me I shouldn’t even bother seeing it, and interestingly, the scores for it on user-generated sites like IMDb have been significantly lower than the critic-generated reviews on Rotten Tomatoes. Unfortunately, it seems to me that this negative response is more the result of our current social climate than the actual quality of the film. The first point working against it is that it’s a reboot of a hugely popular cult film, which puts it in the position of being compared to the nostalgia-elevated, very-original-for-its-time, pre-CGI original. The second reason it’s getting negative response is that (wait for it, cause I’m gonna say it) all the main characters are women and the only male characters are dumb or need saving or both. Yeah, everybody, I went there, I called the internet sexist. I’m sure this totally unknown and unforeseeable piece of information completely blew your mind.

The plot follows Erin, a physics professor applying for tenure, and her childhood friend Abby, who has devoted her life to hunting, trapping, and studying ghosts. The pair used to be amateur paranormal investigators before their lives took different paths, and they co-wrote a book together about ghosts. This book, which Abby put up on Amazon for some extra cash, is how the concerned owner of a haunted house tracks down Erin to ask for her help in dealing with his ghost problem. Desperate to keep all the ghost nonsense away from her very stuffy academic job, Erin tracks down Abby, who now has an eccentric genius assistant named Holtzmann, and grudgingly agrees to help the two of them look into the ghost situation, mostly so haunted house guy will never bother her again. The house, however, turns out to be super ultra haunted, and Abby’s video documentation of Erin being ghost-slimed and shrieking “ghosts are real!” ends up on the internet and gets Erin fired from her job. With no better prospects and a rediscovered conviction about ghosts, Erin teams up with Abby and Holtzmann to carry on with their research into capturing and studying ghosts. They set up shop above a Chinese restaurant and hire an incredibly dim but very attractive secretary named Kevin for lack of any other applicants. 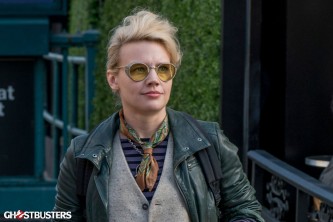 Pictured: the eccentric one.

Shortly after the haunted house incident, another ghost appears at a subway station where our fourth hero, Patty, encounters it and seeks help from the newly formed ghost research team. After a harrowing experience trying to catch the entity, the team finds a mysterious device apparently planted to summon the ghosts, and begins trying to figure out who is unleashing super-powerful ghosts on New York City and why. Patty decides that taking down the supernatural is a much worthier pursuit than her job with the MTA, so she joins up with the other as-yet-not-officially-named Ghostbusters. The team—plagued at every turn by internet skepticism, inept city government, and their phenomenally dim secretary—slowly uncovers a plot by a weird little bellhop dude to unleash angry ghosts on the world, because basically he hates everyone and people suck. In the short term, he succeeds before they can stop him, using his ghost machine to kill himself, possess Kevin, and open a portal to… wherever it is that ghosts come from. The ladies then have to fight a swarm of ghosts, rescue poor Kevin, and close the spooky portal to save the day.

Of course, the plot isn’t what everyone is really curious about, you can get that anywhere on the internet. The real question that is surely burning in the mind of anyone reading this blog is: how well did the movie handle its all-female primary cast? Did they squander the talent of these excellent actors with tired, patronizing sexist garbage? Is this movie going to further erode your faith in society?

There are two lamps in this picture, and one of them is more useful than the other.

I am delighted to report that, from where I’m standing, there were no major fuck-ups. There were some missteps, sure: the fart jokes were a little heavy-handed, for one. Not that I take issue with fart jokes as a comedic medium, but I could almost feel the writer looking through the screen at me, making direct eye contact, and saying, slowly, “Look at the fart jokes these women are making. Typically men are associated with fart jokes, but look how we have subverted the convention. This is not something you, the viewer, were expecting. Laugh.” Kevin’s ineptitude was also pretty caricatured, which was a little distracting, but he was clearly meant to be an aggressively blunt criticism of both the “pretty airhead secretary” trope and the “sexy lamp” trope (Kevin does not successfully do his job even once, ultimately serving literally no purpose except to be rescued). The main characters’ ever more astonished reactions to Kevin’s unbelievable inability were what made that running joke work. Other than that, however, the humor was genuinely funny throughout. The only disparaging comments made about the fact that all the Ghostbusters were women were made by in-universe random YouTubers and the villain. Said villain, Rowan, was already established as an unlikeable weirdo, and his “couldn’t decide what jumpsuit to wear” comment was delivered in a very awkward, unfunny way. 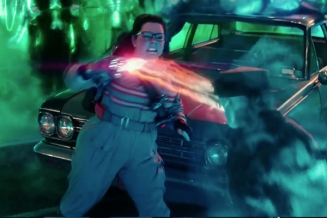 Interestingly, the actual ghost fighting in this film was much more physical than in the original Ghostbusters. In addition to their proton packs, each character had a sidearm anti-ghost weapon that Holtzmann had built for them, and they had to do a good deal of shooting, punching, running, and jumping around. In that respect the characters were depicted as neither implausibly powerful nor insultingly inept. Their fight scene felt very competent and very realistic for what an ordinary but very determined human could accomplish. The heavier characters were also completely capable in the brawl and weren’t made into a joke at any point, and the most conventionally attractive of the bunch was not put into sexy poses or made to suffer any convenient clothing rips.

Another point in the movie’s favor was that none of the characters fit too squarely into a stale, prefabricated “character type,” which was both refreshing and made them more believable and relatable. Erin, the apparent stuffy rule-following academic, had a contrarian, competitive streak that got the better of her a few times, and Holtzmann, the almost-too-quirky engineer, delivered a heartfelt (if slightly awkward) speech about how much the other Ghostbusters meant to her. I connected quite a bit with Patty, actually, because I too am driven by an intense blend of curiosity and optimism that motivates me to be involved in new, exciting things even if they scare the shit out of me. I don’t really feel qualified to remark on Patty’s characterization in regards to race and whether or not it was successful and relevant and respectful, so I will let others speak on that angle, but I found in general that the characters were entertaining and genuine. I maintain that a very significant portion of the criticism the film has received comes from a quiet undercurrent of sexism, be it intentional or otherwise, and not from any real failing on the part of the film. It was a fun, lighthearted, entertaining story with a great cast and while it’s certainly a different animal from the original, I would strongly recommend it.

10 thoughts on “Pan Reviews: Ghostbusters! (The One with the Ladies)”