Star Wars Rebels’s third season finally has its own trailer, and after that literally explosive ending from Season 2, I couldn’t be more excited. Let’s take a look.

I think at this point, it’s pretty safe to say that Ahsoka isn’t coming back to Rebels. Part of me is sad to see my favorite character gone from the show—I knew this was the case when Season 2 ended, but part of me didn’t want to believe it. At the same time, though, bringing her back would just be bad writing at this point. Rebels, sadly, is just not Ahsoka’s story and we got a more or less satisfying conclusion for her character. With the third season, we will instead see the fallout of everything that happened to the characters in the previous season.

The season ended with Maul slashing out Kanan’s eyes and Ezra being tempted by the dark side of the Force and opening the Sith holocron. For Kanan, it looks like this change is permanent. In the trailer we see that he keeps a covering over his eyes now and must rely on the Force to see. I’m excited for this so much. While he can easily fall into the “badass blind mentor” trope that seems so common, this is also a trope his character has been set up to avoid. Kanan is bad at teaching and figuring out what’s best for Ezra. Kanan’s own training got cut off short, and we’ve been shown that while he knows numerous Jedi sayings and traditions, he doesn’t necessarily know why the Jedi did and said the things they did. He’s also spent the past so many years neglecting his own training and practices until Ezra showed up. All of this in turn means that Ezra’s training will be poor and incomplete, and that makes a potential fall to the dark side much more believable. 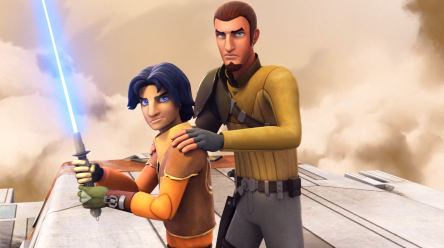 Now that I think about it—this is the exact setup that should have happened between Obi-Wan and Anakin in the prequels.

It’ll be great to see how Kanan and Hera deal with this change in their lives and where they take their relationship from here. While it’ll be sad if one of their space babies turns evil, they still have two other children—Sabine and Zeb. We know that the prophecy surrounding Zeb still isn’t done and considering how well Season 2 handled both his character and Kallus’s, I was a little disappointed to not see the two of them interacting together in the trailer. As for Sabine, I’m starting to suspect that she is related to Pre Vizsla and might be Bo-Katan’s daughter. We see Sabine not only getting back in touch with her Mandalorian heritage but also getting ahold of Pre Vizsla’s lightsaber. She even said back in Season 2 that her clan is part of his house. While any kind of familial relationship would be exciting, it has the downside of making their universe feel smaller than it should, since not every character needs to be related to each other when their world is literally a galaxy. Cameos from past characters can be a lot of fun—one of the Twi’lek’s we met last season is potentially the little girl Rex saved during The Clone Wars—but when you have a new show and an entire galaxy to pull from, newer characters shouldn’t all be tied down to the older ones.

The part of this trailer that has people most excited, though, is the introduction of Admiral Thrawn. I’m going to admit right now that I know nothing about this character except from what the trailer shows me, and my initial impression is that he’s going to be a great villain. I know that his character existed in Legends, and given all the hype about him, I’ve been adamantly avoiding spoilers, because for once in my life I genuinely want to be surprised by the storyline.

As the season gets closer to airing later this year, I find myself growing more worried for all the characters and their potential upcoming demises. The time frame between Rebels and the start of Rogue One and Episode IV is rapidly closing, and all I want right now is for my space mom goddess Hera and Kanan to be happy together with all their babies.