Game of Thrones’s sixth season bothered me on a number of levels, and the show has really been heading downhill since Season 1. I understand that when making a television show, some things from the original books need to be cut—that’s just the way things are—but there’s a huge difference between cutting material that’s not essential and taking shortcuts at every opportunity, no matter how detrimental to the story. The worldbuilding in the show really started to bother me during Season 5, but it wasn’t until Season 6 that I could put my finger on it: Westeros is small.

Despite all my complaints about literally everything Game of Thrones has ever done, I did enjoy the first couple seasons. Westeros felt like it could be a real country. Ned Stark knew all the men working under him by name, the smallfolk featured prominently in scenes and had complaints that needed to be addressed, characters would talk about their extended family members, and it took more than five minutes to travel from the Twins to King’s Landing by horseback. Tradition and laws had to be upheld and what the gods wanted, both old and new, mattered. A character couldn’t just kinslay their noble family members in front of armed guards and get away with it.

As the show has been nearing its end—I think there are going to be only one or two more seasons—the shortcuts in the narrative have started to become more obvious, and unfortunately, this means that the worldbuilding has suffered as well. Good worldbuilding can come from a number of different places—characters, culture, religion, and probably most obviously, geography and landmarks. This is something that Game of Thrones did a more than decent job with during the first couple seasons. These things allow us to get a sense of who the characters are and what type of world they live in. This can also contribute to what lesson or message the story wants us to take from our viewing experience. Every single one of these is important to good worldbuilding, and unfortunately what that means is that the more shortcuts Game of Thrones takes, the more likely the worldbuilding is going to suffer. 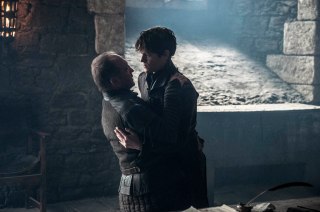 To start, there’s the lack of culture and religion. Religion played an important role in the earlier seasons—people worried about Ned Stark going to King’s Landing, because the old gods didn’t live down south and couldn’t protect him. Stannis burned people alive and believed he was Azor Ahai. Kinslaying is taboo, so is breaking the guest right, and when religion and tradition were violated, such as at the Red Wedding, the realm spiraled into chaos. These beliefs helped to inform the characters and tell us what is and is not important to them. Then, Season 6 rolled around and not only did Ellaria and the Sand Snakes murder the Martells, Ramsay also murdered his father. All of these crimes were committed out in the open, and despite being actions directly against the known values and belief systems Westerosis hold, nothing happens to the perpetrators. These deaths are not addressed and it goes against what we know about Westeros. Spontaneously, Westeros stops feeling like a real place because of this contradiction. If kinslaying isn’t a taboo, then why did the characters make such a big deal about it in the earlier seasons? Why do they have folklore about the gods cursing people for breaking tradition?

At this point, religion only plays a role when the plot demands it to, and that means that it no longer feels like an important part of the characters’ lives in the way that it should. But if that weren’t bad enough, there’s no longer a variety in the characters we do get to see. The wants and needs of the smallfolk don’t seem to matter anymore, and when they do feature, their lives revolve around the main characters. Arya spends an entire season in Braavos watching a play about Cersei Lannister over and over and over again. I have to question why the people in Braavos care so much about what happens in King’s Landing when the world is filled with other people. Daenerys is off conquering Essos with dragons, there are reports of a dead army in the North, and the war of the five kings finally just ended with Balon’s death, yet the story wastes our time on a play about Cersei repeatedly. It doesn’t feel as though the people of Braavos have their own problems to deal with or a separate culture from the people in Westeros.

Certain storylines and characters have also been dropped with no explanation. Tysha, Tyrion’s wife whom Tywin had raped, is a big part of Tyrion’s backstory. He tells us about her in Season 2, and the memory of her is one of the reasons he opens up to Shae and is paranoid about keeping her safe. Tysha’s someone who Tyrion loves and is possibly still alive, and then what? After Tyrion flees King’s Landing, her character is never mentioned again. I understand not wanting to introduce her to the narrative this late into the show—after all, some material does need to be cut—but if this was the direction Game of Thrones was going, why mention her at all to begin with? Her character cannot be a driving motivation for Tyrion in one season and not in another.

The removal of characters unfortunately goes further than Tysha. During Season 3, Margaery told Sansa about her cousins, yet I’m supposed to believe that Cersei succeeded in murdering the last of the Tyrells. Oleanna wants revenge for her family at the end of Season 6 because she thinks they’re all dead, except that they’re not. There are other Tyrells still alive, which we know because of what Margaery’s told us about her family. However, because the show is wrapping things up, their existence has been dropped.

Game of Thrones has been so concerned about all the main characters, who come from great houses, that not only has it neglected the smallfolk, it’s also neglected other nobles. And if other noble families do show up, their motivations and actions are what the plot demands. I still have to question how an entire army made its way from the Vale to Winterfell without anyone noticing—it’s not easy to hide an army, especially when they have to cross the Twins to get to their location and then take up residence in a castle previously established as occupied by the Boltons until Sansa needs them. It’s completely unbelievable that not a single scout managed to get word back to Ramsay. Despite scenes that show hundreds of ships sailing off to war, thousands of knights on horses, and smallfolk standing everywhere in the background, Westeros feels as though it’s maybe occupied by about a hundred different people. Having grand scenes filled with thousands of extras won’t make a story feel grand unless the narrative also supports it.

However, it’s not just the lack of culture and the refusal to acknowledge the existence of other characters that make Westeros feel small. It’s also the country itself. In the first season, characters could travel all the way from Winterfell to King’s Landing in the course of an episode, but there was still a sense that time had passed in order for them to make that journey. Now, characters appear in the countryside wherever they are needed for the plot, and I honestly can’t tell if the past three seasons have taken place over the course of three years or three weeks. As far as I’m concerned, the Twins are half a day’s ride from King’s Landing at this point, despite being months away in the earlier seasons. Geography played an important role for the characters at one point in time—Arya lost Nymeria in the woods, Robb couldn’t get his army across a river without making a deal with the Freys, it took over a month for Robert to get his entire entourage to Winterfell, and the upcoming winter was a huge deal. Despite that, winter itself has also been a complete non-issue for anyone south of Winterfell—in fact, the only place that it’s snowed at all is in the north. Everywhere else it still feels like summer. The worldbuilding suffers here because not only is Westeros now physically smaller, it’s also inconsistent.

Without good worldbuilding, everything in Game of Thrones that could have been compelling stops feeling important. If the characters don’t have a setting or sense of culture that I can care about, it makes it all the harder to care about them and their ideals. There’s a lot of material that didn’t make it from the books into the show, and while I fully understand why that is, what I don’t understand is why that had to come at the expense of telling a good story. For all the claims that Game of Thrones is ending soon, the show spends time on pointless scenes that add nothing to the world when it has literally thousands and thousands of pages from the original source material it could pull from. The show has multiple dropped storylines that it could focus on to rebuild its world. Instead, I feel as though the show is going from plot point to plot point as if it’s an outline and not a story, and its lack of worldbuilding only reinforces that idea. Westeros is no longer a country that feels real. It’s tiny and impossible to care about.

2 thoughts on “Game of Thrones and Its Diminishing Worldbuilding”