The “star-crossed lovers” trope is pretty much the oldest, most worn-out convention in literature. It was old news when Shakespeare wrote Romeo and Juliet, though no one can dispute that he did it with exceptional flair. It was certainly long since old news when Fiona Staples and Brian K. Vaughan conceptualized Saga, yet theirs has been one of the most engaging and innovative independent comics of the last several years. There is no single reason for Vaughan and Staples’s success, as they are an exceptionally talented team and the story and characters they have created are brilliant, but they have managed to hit on something specific that gives new life to their own star-crossed lovers tale: filthy, nasty sex.

We made this baby, it was awesome.

While few mainstream titles rival Saga in graphic depictions of humping, sex is not a new feature in comics, and sex itself does not a statement make. What’s unique about Saga is that it takes a trope that has become fairly safe and tame and really gives it claws, socially speaking. The star-crossed lovers story is an easy audience pleaser because in modern times it’s rare for sweet, doe-eyed romance to be seen as shocking or subversive, even when it is between two people that some system or other has conspired to keep apart. Romance is a convenient, relatable, apolitical, nonviolent subversion of an unjust system. You’d have to be a heartless bastard to not have some sympathy for two conventionally attractive young straight folk fighting an unjust system with the power of love.

You knew what you were getting into. 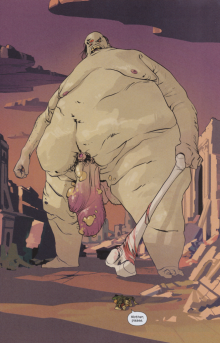 All of that consternation is getting closer to what Staples and Vaughan were trying to evoke with Saga. Alana’s culture considers Marko and other “moonies” a lesser species, and Marko’s culture blames Alana’s for a long history of oppression and wartime atrocities. Depending who you ask, their relationship is bestiality, treason, or some combination of both. In the context of the universe, Marko and Alana’s relationship actually is shocking and disgusting and uncomfortable for most people, so everything about the comic is designed to be at least a little bit uncomfortable for most readers. This is the sort of book that you have to read with the pages opened at a forty-degree angle if you’re in a room with anyone else who hasn’t read it already. Even if you’re a little desensitized to sex in media, most people at least blink a bit at enormous, pendulous alien beast testicles, child prostitution, and gray people with TVs for heads doing it doggie style.

This artistic choice, both in Marko and Alana’s relationship and in the grittiness (read: nastiness) of the universe in general, has really revived what made the star-crossed lovers trope dynamic and political in the first place. It’s no wonder that in the modern absence of caste systems, legally-mandated class division, and genuine family blood feuds, most of us have forgotten what a forbidden romance really is. But if there’s one thing guaranteed to spark a moral panic, it’s two consenting adults deriving mutual pleasure from sex. Another important revision of the cliche is the fact that the two lovers in this case produced a child, and the narrative did not punish them for it with death or a terrible bitter relationship or any other moralistic garbage. Having a child, while it made their lives even more dangerous and chaotic, is also the literal starting point for Marko and Alana’s story, and is—according to both them and to the narrative—the most important thing they had ever done. Even more important than falling in love and loudly fighting the system with filthy, nasty banging.

Hazel knows what up.