The 2016 Rio Games are the first Summer Olympics since the Marvel Cinematic Universe took over the world: The Avengers was still in theaters during the London Olympics, and since then, we’ve had seven more movies and nine seasons of TV. The MCU has been joined by multiple DC universes, plus various Spider-men, X-Men, Deadpools, and yet another Fantastic Four. As never before, the superhero has been firmly lodged in our collective consciousness.

The Olympics offer a real-world counterpart to superheroes. Without radioactive spiders or super-soldier serums, Olympic athletes demonstrate impossible powers every four years. Each time a record is broken, the athlete exceeds the previous limit on human capabilities.

Neither happens in a vacuum—both superheroes and athletes complete narratives far greater than a list of records and abilities. They stand astride the existing fissures in society, especially regarding gender, which is particularly tied to the expectations placed on bodies. In many ways, they show us how far we have come and our hopes for the future, but of course, they reveal how far we still have to go.

Women’s gymnastics captures the dynamics in both sports and superheroes. While tensions remain between perceptions of femininity and athleticism in all sports, they are most acute in gymnastics, which has long traditions of pushing an extremely limited vision for female bodies.

At the same time, gymnastics looks like a superhero movie, as the athletes perform routines which have become visual shorthand for superpowers. Compare Aly Raisman’s performance with Black Widow in Iron Man 2.

Natasha Romanoff is not the only female superhero in the world, but she is particularly prominent in the MCU, now appearing in a half-dozen or so movies. Her fight scenes are reminiscent of gymnastics directly, suggesting her training included gymnastics, along with ballet.

Natasha’s career, from medium to medium, in many ways tracks the path of women’s gymnastics, beyond her fighting style. Her Soviet birth reflects the traditional gymnastics prowess of Eastern Bloc nations, and her defection to SHIELD mimics Nadia Comăneci’s defection to the United States in 1989. Her training in the Red Room seems to recall the grueling and barbaric conditions in Soviet gymnastics schools: both destroyed the lives of their students. 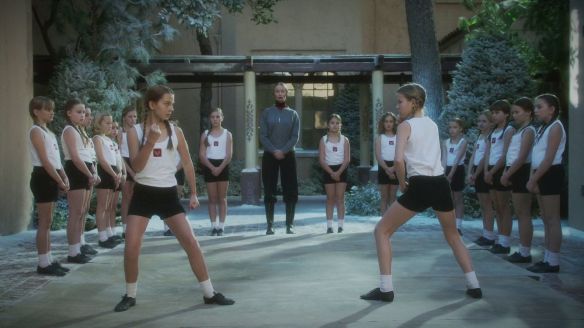 The Red Room, as seen in Agent Carter

Black Widow’s appearance also seems to track the same feminine ideal that has faced gymnasts: she must be strong while remaining lithe and delicate. Her early costume is essentially a gymnast’s leotard, and her physique matches contemporary Soviet gymnasts in the 1960s, such as Larisa Latynina, whose nine-gold-medal record was unmatched in any sport before Michael Phelps came along:

While appearing fit, her strength is not evident in the tone or bulk of her muscles, in contrast to her, well, hulking, male peers.

Both would thereafter move toward opposite but parallel extremes of femininity. Black Widow’s character always had a femme fatale element, but her body would be sexualized to ever more absurd degrees in subsequent years: artists intensified their focus on her breasts, rear, and waist:

Gymnasts shrank away, almost to nothingness, competing in a sport that infantilized them, insisting on little girls who would never become women. Coaches triggered eating disorders in their athletes, which in some cases, claimed their lives. These regimens were so extreme, they often delayed puberty in female athletes—a boon to their careers. Despite projecting a childlike innocence that contrasts with the hypersexualization of Black Widow, there’s a parallel with Natasha’s forced sterilization. Both the Red Room and the gym make clear that their control is threatened by the typical processes of female biology. On both sides, femininity apparently became incompatible with a real human body, to be achieved only through an artist’s pen or extreme self-abnegation.

These are, of course, extremely abusive environments. Comics conventions still struggle to overcome a plague of sexual violence and to bring women into the industry. Gymnastics needed to work hard to escape a climate where eating disorders were not only prevalent, but encouraged: even in books for kids. Sexual abuse lingers in the shadows as well.

In 2016, we may at last be seeing the light at the end of this particular tunnel. Gymnasts still have unusual physiques, but they are obviously muscular and athletic, fitting in comfortably with the runners, swimmers, and jumpers in other sports. The sport is beginning to lose its anxiety that strength is simply unfeminine.

Simone Biles may be short, but her routines emphasize the incredible power in her muscles. She is not Tinkerbell, flying on gossamer wings, but a woman who soars on her own trained, flexing muscles. Her rise into the gymnastic pantheon indicates the progress already made, as strength must not be hidden away from femininity.

Likewise, Scarlet Johansson’s Black Widow is kinetic. While she retains her feminine wiles, she does not merely charm and seduce her way into power, but runs into hand-to-hand combat against powered people. Winning a fistfight is not antithetical to her image.

This is not to say the war is won, of course. The MCU has yet to give Black Widow her own movie, and the Marvel marketing department is constantly leering at Johansson’s T&A. 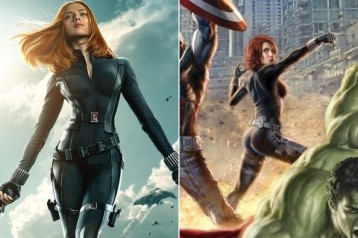 Gymnastics still pushes plenty of traditional femininity at its performers, and offers TV coverage which still seems to be amazed that the athletes are women. Commenters call adult women “girls”, and they’re dressed in sparkly leotards, dancing across the floor in perfect make-up. They’re expected to smile, even when concentrating, and they’re asked to act like pageant queens, win or lose, when interacting with the press or each other. There’s a ways to go.

However, it does seem to be embracing and celebrating the racial diversity among its global athletes, especially in the United States. This is increasingly matched in comic books, but remains very rare in superhero movies.

Of course, if it’s just a question of finding someone who can do her own stunts, there’s a place to start: