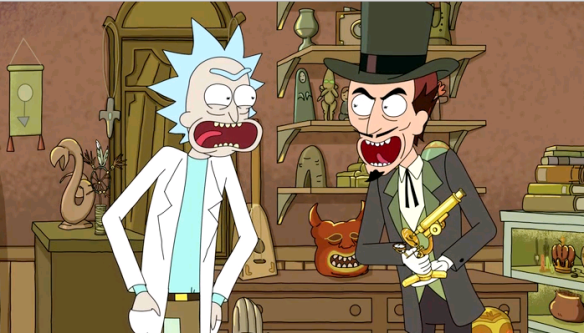 In many fandoms these days, science and magic exist together with a variety of results. Sometimes magic and science exist in harmony, sometimes they are at odds, and sometimes magic is really just misunderstood science. There’s a whole plethora of ways these two forces can exist in the same world. But there isn’t always a narrative reason for it; oftentimes, magic and science simply exist together to cause drama or to add more interesting elements to a story. Which can be fine, but when a story involves both science and magic, it can be helpful for the writers to use these two forces to strengthen the overall message of the story. In Rick and Morty, science reigns supreme, but elements of magic still exist. In one notable episode called “Something Ricked this Way Comes”, in which Rick fights the devil, we see a continuing affirmation of the show’s philosophy of existential nihilism.

When Summer starts working at an antique shop, Rick quickly discovers that Summer’s boss is actually the devil and is cursing people with magical objects. Rick uses one of the cursed objects to come up with a scientific way to scan and detect the curses in each object. He then figures out a way to remove the curses or counteract the negative effects of the curse. When Rick first meets the devil, he recognizes what he is almost immediately and asks if he is in fact the devil:

Rick: So, what are you—like, the devil?

The devil: What? Sorry?

Rick: I don’t know. Store comes out of nowhere, all the shit’s old and creepy. Are you the devil? A demon? Leprechaun?

Rick: Hey, I’m not judging. Just like to shoot straight. I’m a man of science.

When Rick comes up with his device that detects the curses, he asks Morty, “Does evil exist and if so can one detect and measure it?” He then answers his own question by saying, “The answer is yes; you just have to be a genius.” Rick and Morty is very clearly a sci-fi show and only introduces the concept of magic and curses to show that science is by far superior to magic. But why is it showing that science is superior to magic? Simply to break down pre-existing understandings of the universe. In existential nihilism, there is the understanding that a person needs to be honest with themselves and realize that things like religion and metaphysics are simply a response to fear and death. Before human beings understood how the world works, we thought so many things were magic or the realm of the gods. By fighting the devil’s magic with science, Rick is engaging in a form of active nihilism. According to nihil.org, active nihilism is:

Nihilism seen as a continuous process, meaning one strips the outlook on life of all values, and then create new values out of the void, thus turning nihilism into a form of mental weapon, that one can use to examine different interpretations of reality.

Rick uses his scientific abilities to show that the devil and his magic are weak, stupid, and useless, but he is also intent on showing other people that this is the case. Humans come into the devil’s store looking for magical solutions to their problems. The devil, of course, is not honest with them about how these objects will mess with them, instead speaking cryptically about how they will pay later. Rick shows up in the devil’s store scanning each object and loudly announcing the negative effects, scaring away his costumers who now know about the curses and don’t want to deal with them.

Rick: It detects and catalogs all your “twilight zone”, “ray bradbury”, “Friday the 13th” the series voodoo crap magic. I thought you might want it so you didn’t accidentally sell anybody, say… A typewriter that generates best-selling murder mysteries and then makes the murders happen in real life?

The people who came to the devil’s store thought they needed these magical objects to find some sort of fulfillment from something they were missing in real life. Rick shows them through his inventions that the beliefs they had about magic were wrong, or simply reveals their ignorance in going to the devil (whom Rick calls “a hack”) for help. This episode of Rick and Morty shows active nihilism, with Rick breaking the previously understood values and beliefs that people held and showing powerful figures like the devil to simply be “hacks”.

Rick eventually sets up a shop to remove the curses from the objects. He offers people the opportunity to have scientifically modified magical objects without any of the negative effects from making the age-old deal with the devil—a.k.a. without putting value into old systems the devil and his magic are a part of.

“Don’t pay for cool stuff with your soul. Pay for it with money. You know, like how every other store in the world works?”

Rick, by disparaging magic, dashes the old belief systems the devil and magic are a part of, but to truly engage in active nihilism, Rick needs to also replace those values with new ones. This new value would of course be realizing that nothing actually matters, and Rick shows that as well in his whole attitude about the situation. He tells Summer that beating the devil wasn’t important to him: “To me, this was all just a bit, like when Bugs Bunny fucks with the opera singer for twenty minutes.” He also eventually destroys his shop that removes the curses from the cursed objects because he just got bored.

A lot of stories combine magic and science, but not many combine them in a way that emphasizes the overall philosophy of the story. Rick and Morty is a show that specifically focuses on science and uses magic only to continue to show how useless it is and to show how placing values into such things is pointless, thus supporting its overarching philosophy of existential nihilism. It’s maybe not what fans of fantasy would likely enjoy, but it’s still a smart way to engage with magic and science in a story. 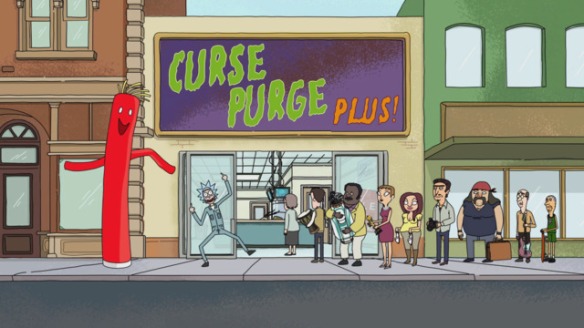