Once upon a time, a friend recced me a webcomic called Namesake. Now, I really like stories that have some kind of “stranger in a strange land” shenanigans, and Namesake, a story about a girl from our world who ends up in the classic literature story The Wizard of Oz, seemed like it would be right up my alley. But I’d already seen enough stories with this same premise—so many shoujo anime have episodes where the female protag ends up in Alice of Wonderland, for example—that I thought Namesake would almost definitely be boring or clichéd. So it took me an extremely long time to actually start reading this webcomic. Once I did, though, I found out that Namesake has way more of a plot than its premise would imply—and it’s definitely right up my alley. 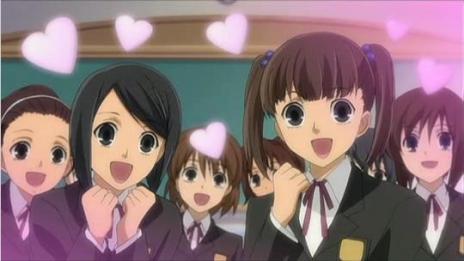 Namesake is a very long webcomic that has, since its inception, already filled two physical Kickstarter-funded books and hundreds of webpages. I haven’t quite caught up yet, but I’m almost finished and I’ve loved everything I’ve read so far. Our protagonist, Emma Crewe, is picking up her sister from the library when she’s suddenly transported into a new world—the world of Oz. She quickly finds out that she’s a Namesake: one of a group of people who can go to different worlds based on their name. Alices go to Wonderland, Wendys go to Neverland, and Dorothies end up in Oz—but Emma’s not a Dorothy, and her arrival in Oz heralds the end of a long and convoluted mystery.

The story is told in several concurrent parts. While Emma is in Oz, her younger sister Elaine is still in the real world (Toronto, where the comic is set) and turns out to be a Writer: a person who records the adventures of a Namesake and can complete the adventure by writing everything down. When she discovers a man called Jack lurking around the library, she demands to know what he knows about Emma’s disappearance. As it turns out, Jack is part of Calliope, a secret group that helps Namesakes and Writers and is itself under attack by a group called the Rippers. Meanwhile, in brief intermissions between the main arcs, we get the story of Alice Liddell and Lewis Carroll, who may have started this whole thing in the 1800s and who connect to our main story in ways we don’t yet entirely understand. The pacing keeps you hopping from one cliffhanger to the next, finding out crucial snatches of information in one plotline only to instantly switch to the next. It certainly keeps you turning the page—or clicking the “next” button, as it were.

So although it is about modern girls in literature, Namesake is far from clichéd. The chosen girl doesn’t just arrive to save the world and leave; sometimes they stay there forever and sometimes they are lost, whether that’s via dying or via more mysterious means. The worlds in question have built up their own mythologies around the girls who arrive to save the day: Emma finds a shrine to the Dorothies in Oz, and many of the Ozites have their own opinions about the Dorothies, not all of which are positive. In the meta context of the world, the idea of Writers who can affect the story might be a deus ex machina, but Elaine’s and other Writers’ actions never come off as such—instead, they and the Calliope organization seem like a natural continuation of Namesake’s core idea of entering other stories. What cooler way to emphasize that than to have a Writer who can affect not only other stories but also the “real” story being told in Toronto? It’s really fantastic worldbuilding.

Namesake is pretty great on a representation front, as well. Emma and Elaine are brown-skinned, though their heritage hasn’t yet been delved into; there are queer couples in Oz and in Toronto, and there are people of different body sizes and physicality throughout. I particularly like the artist’s use of color to emphasize certain plot points—most pages are black and white save for a splash of blue from a portal or red from a bloody injury. If I had a minor quibble, it’s that the characters’ faces are sometimes hard to tell apart, but this gets better as the comic continues.