After being somewhat let down by my re-watch of Scooby-Doo and the Alien Invaders, I was kind of loath to put my nostalgic favorite Scooby movie under a critical microscope. Thankfully, I discovered upon rewatching that it was still pretty enjoyable. 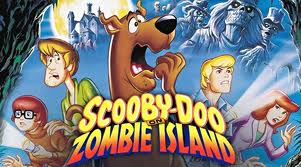 Spoilers for a movie that’s old enough to vote after the jump.

The premise of Scooby-Doo on Zombie Island runs thusly: Mystery, Inc. has broken up. Daphne is now the host of a popular talk show, produced by Fred. Velma runs a mystery bookstore (unsurprising) and Shaggy and Scoob are working as customs agents due to Scooby’s uncanny ability to sniff out contraband food in luggage. The split was apparently amicable, though, because when Fred decides to get the gang back together for Daphne’s new Haunted America segment, they’re all excited to get back into the business. 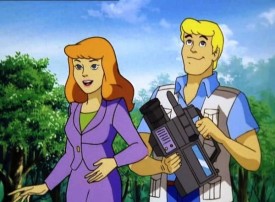 Daphne is eager to find real spirits; she laments that she left the mystery-solving business in the first place due to frustration with the bad guy always being a person in a mask rather than something actually paranormal. However, in the beginning, the newly reunited Mystery, Inc. seems to turn up only more of the same, despite starting their search in the notoriously spooky city of New Orleans. So when Lena, a local woman, suggests they come out to the Moonscar Island mansion where she works, a place she insists is really, truly haunted, they figure they don’t have anything to lose.

It’s not long before the house, owned by a stern French cat lady named Simone, delivers. A ghostly message, and then another, and then another, warns the gang to leave the island. But this is exactly what Daphne is looking for for her segment, and despite Shaggy and Scooby’s fears, and Velma and Fred’s insistence that there has to be a logical explanation for it all, they stick around. After all, between the grumpy estate gardener, an unpersonable, tourist-hating local fisherman (voice acted by Mark Hamill of all people!), and a too-friendly bayou ferryman, it seems very possible that someone could be using the island’s centuries-old history of mysterious disappearances to cover up something sketchy.

Then things get weird. All the ghostly warnings culminate in a mass rising of zombies from the bayou, which chase the gang through the swamps. Lena finds them and insists they come with her because Simone was kidnapped by the zombies, but it turns out to be a trap. Simone and Lena reveal that they are immortals who have to feed on human souls once a year at the harvest moon. Back in the 1600s, after their peaceful settlement was attacked by pirates, they offered their souls to their cat god in exchange for the power to seek revenge on the pirates, but it came with a price: once a year, they had to feed again to appease the cat god. 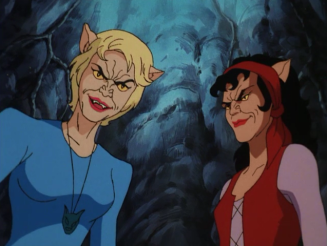 This explains the rash of soulless zombies. However, the gang manages to distract them long enough that they miss the window in which the two had to complete the ceremony. Without the souls they needed to sustain them, they melt away like an animated version of that dude in Indiana Jones and the Last Crusade. Unfortunately, Fred has lost his one video camera in the swamp while they were being chased, so even though Daphne got her footage, it will never see syndication.

Probably the weirdest thing about re-watching this movie was being reminded that I’ve seen it enough that, even without having watched it in years, I could still quote like, half the movie along with the characters. It also has kind of rockin’ music for its montages and chase sequences? Ultimately, this movie remains pretty watchable. It’s got an intriguing premise, a darker-than-you-realize-as-a-kid conflict, and a satisfying twist at the end.

There is a light smattering of tedious heteronormativity, as Daphne and Fred flirt with the gardener and Lena respectively to get on the other’s nerves, and when it turns out that the gardener is actually a detective investigating the island’s disappearances and that Lena is an immortal cat monster using her wiles to lure victims to the island, they fall ambiguously back into each others’ arms. This leaves the detective open for Velma to awkwardly flirt with. In the words of Mark’s mom from RENT, “let her be a lesbiaaaaaaan”, please and thanks.

Ultimately, the biggest problem with this movie is its racial representation, or lack thereof. For a movie set in the deep South, it’s pretty lily-white. Lena is kind of ambiguously light brown, but it depends on the lighting in the scene. Certainly her original group of settlers was white, so it’s probably just a tan. The rest of the movie fails to deliver any notable characters of color except for a talk show host at the beginning, who allows Daphne to deliver the exposition bombs that reveal the movie’s setup in the guise of an interview. There are no nonwhite speaking characters in all of New Orleans, and although Moonscar Island has served as both a plantation and a Confederate base in the distant past and the women’s magic is somewhat tied to voodoo, there still aren’t any Black people. This is pretty reprehensible considering how many Black people and other people of color should have been represented in these scenes. There’s no reason any of the non-Mystery, Inc. characters had to be white, except perhaps Simone—it seems less likely that society would forgive the same eccentricities Simone displays in a woman of color—so it’s disappointing that they all were. The movie doesn’t actively propagate a racist message, but it does passively contribute to racism by whitewashing its cast this way.

That said, this movie is an hour-and-ten of pretty hardcore nostalgia. If you remember enjoying this movie as a kid, I definitely recommend revisiting it. It stands up to the test of time way better than a lot of stuff I’ve re-watched for this column, and if you watch it too, we can both have “It’s Terror Time Again” stuck in our heads for the rest of the week.