I am an eternal optimist when it comes to reboots, mostly because it’s exhausting to be constantly whining about a ruined childhood. All I hope for is that the reboot captures the spirit of the original.

Unfortunately for the laboriously titled The Rocky Horror Picture Show: Let’s Do The Time Warp Again, that wasn’t easy. To belabor my metaphor, they probably shoulda called the reboot Ghostbusters to help them with capturing that spirit, because the movie struggled and grasped and ultimately failed to do so. 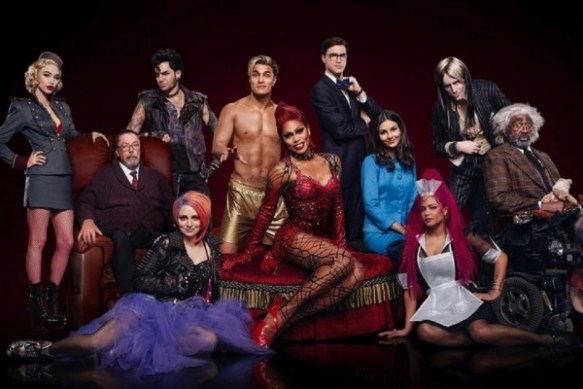 To briefly summarize the plot for the uninitiated (what the RHPS fan community calls virgins): Rocky Horror is the story of Brad and Janet, an awkward and sexually innocent couple who happen upon the castle of Dr. Frank-n-Furter, a flamboyant mad scientist from another planet. The part is usually played by a guy and uses male pronouns for the character, but in the reboot, the role is played by trans actress Laverne Cox and uses she/her pronouns throughout. Frank pulls Brad and Janet into her sordid and seductive world, but as Frank’s schemes spin out of control, her underlings seize power, killing Frank and taking the castle and its inhabitants (sans Brad and Janet) back to their home planet.

It starts off smoothly enough. For the opening number, we’re treated to an actual person with lips, rather than a disembodied pair, singing “Science Fiction Double Feature” as she ushers a cinema audience into their seats. The movie they’re there to see, of course, is Rocky Horror, which is nicely meta and an interesting way to include the traditional RHPS audience callbacks. I thought this was a bit weird at first, but in the end I think it worked.

That can’t be said for the rest of the movie. For a film that was considered subversive in its time but had modern trans activists worried about its potentially regressive message, this version was downright boring. It skirted the misgendering issue by swapping Frank’s pronouns throughout, but making Frank female had a rare negative effect on the musical as a whole. 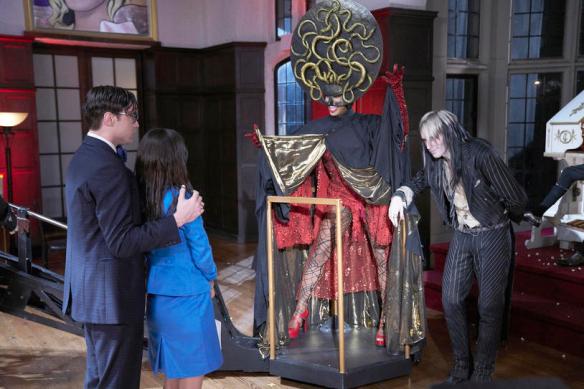 She still makes a hell of an entrance. (via TV Guide)

By making Frank female, it actually takes away from the subversiveness of the character. There’s nothing subversive about a woman in a corset and heels, or a woman whose ideal bedmate is a beefcakey dude. We can still speak to Frank’s sexual agency, to owning herself and her sexual appetite, but it becomes an issue of reclamation rather than dissension. Basically, a guy, whether cis or trans, wearing female-coded clothing, especially sexualized female-coded clothing, and owning it, sends a message along the lines of “fuck gender norms, I am comfortable and happy in this”. A woman, again, whether cis or trans, choosing the same sexualized clothing is sending a message that’s more along the lines of “fuck the patriarchy, I am reclaiming my ability to wear sexualized things without judgment.” This doesn’t have the same message, and also doesn’t really have the inherent queerness that the former does. At least to me, that is. I’m cis, and your mileage may vary.

The movie still keeps some of its queer elements by keeping Frank’s affair with Janet—they have probably the best chemistry of any Frank+someone pairing. However, this still doesn’t work for the story. Originally, Frank does seduce Janet, but later goes on to hate her for sleeping with Rocky and turning Rocky away from him. In this version, the whole “Planet, Schmanet, Janet” scene, in which Frank chases and attacks Janet for sleeping with her creation, seems weirdly out of character, since the two of them seemed more natural together than either of them did with Rocky. Besides this, however, the movie was almost shockingly straight—for example, in the pool orgy scene at the end, Frank gives Brad a sloppy, open-mouthed kiss, and then turns to Columbia and gives her a chaste and motherly hug. It’s also uncharacteristically innocent—in “Touch-a Touch-a Touch-a Touch Me”, Rocky doesn’t even manage to land his hands anywhere sexual for the entire song, and then it fades to black when they actually go to get it on. Part of the subversiveness of the original was that it was full of clearly queer romance and sexual desire; in the remake we barely even see any straight sexuality.

Going back to the inconsistent characterization, that was one of my biggest issues throughout the show. I never felt like I had a read on Riffraff or Magenta—their portrayals lacked the sinister, seedy, mysterious edge of the original film’s. They were just there, being weird. And while this Frank’s behavior was still eccentric, and she still does kill Eddie, the lack of edginess or a sense of stakes to the whole movie means that we never reach the point where we realize that Frank has gone too far, and it therefore feels weirdly unjustified when Riffraff and Magenta step in to dethrone her. Brad sells the hell out of his floor show performance—by far the most owning-it Brad I’ve ever seen—but we never really see the point where stodgy beginning-of-movie Brad turns that corner to become hell-in-high-heels Brad. And Rocky’s issue was less with characterization since Rocky is more set dressing than character, but more that he seemed weirdly… clothed. He does most of the show in a pair of baggy, unsexy gold basketball shorts he may have stolen from my brother’s closet, and only appears in a more character-appropriate pair of tiny, junk-hugging booty shorts for the floor show. 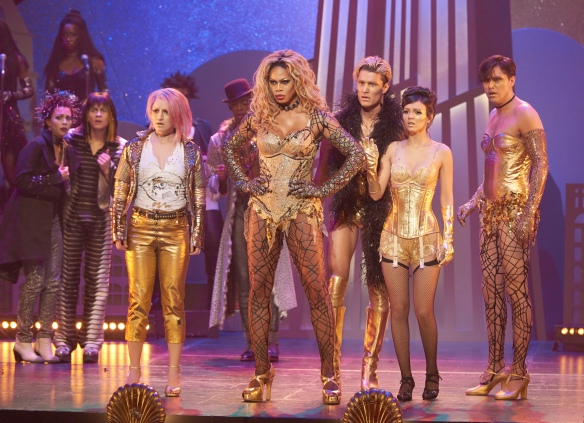 What in the seven hells is with Columbia’s ill-fitting capri pants here?? Doesn’t she realize this is the floor show?? (via Bustle)

And Columbia! She deserves a whole paragraph to herself. Columbia’s charm in the original is her enthusiasm! That’s her entire character—she gives herself too enthusiastically to the things and people she loves, and yet somehow manages to say the wrong thing constantly and gets abused for it. The Columbia in RHPS:LDTTWA (God, it’s even clunky as an acronym) is just utterly disinterested in everything. Her “He’s okay!” to Frank about Rocky may as well be muttered by a stereotypical teenager grumbling into their phone, rather than as a desperate groupie trying to regain Frank’s affection. She screams when Eddie is murdered, but belatedly, just noise for the sake of noise, with no emotion reaching her expression. And her costumes are a nightmare, all huge and floppy, hiding her figure and making her seem like she popped in from a high school production where the principal forbade the wearing of hotpants. The quality of the costumes was inconsistent across the characters, but hers in particular were uniformly unflattering and odd. She delivers the “Meatloaf, again?” line during the dinner scene, again like a grumpy stereotype of a teenager. This is confusing in and of itself—the line originally referred to the fact that the roast they’re eating is actually the murdered Eddie, since Eddie was played by the singer Meatloaf in the original. In this, it’s meaningless except as another whiny complaint from the world’s most depressing Columbia. Couldn’t they have scrambled up some kind of joke that referenced Adam Lambert? His last name is already meat-inclusive!

So was there anything redeemable about this? Well, the vocal performances were great—everyone had pleasant singing voices, which is more than one can say for the original. Victoria Justice was good as Janet. The costume department may have dropped the ball on the other people, but all of Frank-n-Furter’s costumes were gorgeous. So in the end, it wasn’t a complete and utter failure, just… incredibly tame and actively forgettable. I can’t imagine this inspiring the same cult following as the original, which is still having weekly midnight screenings forty years later. The next time I want to do the Time Warp again, I’ll be popping my old VHS in.

1 thought on “Let’s Not Do the Time Warp Again and Just Say We Did: A Rocky Horror 2016 Review”