It’s almost Halloween! Every Halloween I look for witchy movies, but sadly, the vast majority of them portray witches as evil and very very few of them even attempt to portray Paganism, Wicca, or witchcraft correctly. So recently, I attempted to look up Pagan and Wiccan-friendly movies and one movie kept popping up everywhere: The Last Keepers. I was pleased to find that it was on Netflix and sat down to give it a watch. It didn’t have the strongest story, but I can certainly see why it is a well-reviewed movie within the Pagan, Wicca, and witchcraft communities—though it is still not without its issues.

Our teenage protagonist, Rhea, comes from a reclusive artistic family who also worships an ancient goddess. Due to these beliefs, Rhea and her family are treated as outcasts by the town they live in. The family believes in and follows a goddess, though they never specify any particular goddess. Furthermore, Rhea’s family has unspoken magical abilities of a fantasy variety, not magic as is traditionally understood in Paganism, Wicca, and witchcraft. Rhea and her family, like many others in Neopagan traditions, are very concerned with taking care of the planet. Rhea is made fun of for picking up trash at school or going through the trash for recycling. She also gets teased for making a dress out of plastic bags.

Rhea does seem a little bothered by her treatment at school, and wants to at least be a little more “normal”. She has some friends and is happy with them, but her biggest issue is how her friends are getting ready to apply for college. Rhea’s mother wants her to stay home and learn art from her family and continue on their family traditions. They get into an even bigger fight when Rhea gets a boyfriend; she sneaks off with him to work on an art project he is helping her with and her mother doesn’t understand why she is sneaking around. During this time, however, Rhea’s magical powers begin to awaken. Each woman in Rhea’s family possesses a different gift—Rhea’s grandmother controls the elements, her mother sees the future, and Rhea is supposed to receive the gift of healing. But Rhea doesn’t know that her family has magic, and on top of this, Rhea shows signs of possessing all three magical abilities, which makes her particularly special according to her family’s tradition.

I don’t want to say much more and give anything away, but it was an excellent family-friendly Pagan movie. If you are looking for a more action-packed fantasy movie, this will not be the movie for you, as it focuses more on romance and family drama than fantasy. The magic in the movie still does play a crucial role in the development of the story, so it’s still fantasy, but if you are looking for Rhea and her family to battle some ultimate evil with their powers, then you will be disappointed.

The best thing about this movie is definitely the portrayal of a Pagan family and their traditions and beliefs. We see how their morality affects how they live. They do backyard farming and reuse and recycle things that can be recycled; even the art the family creates has a heavy emphasis on nature. We also see realistic portrayals of the family celebrating the autumn equinox in traditional ways common for Neopagans today. The family goes out into the woods wearing long dresses and wreaths on their head to gather items in nature as an offering to the goddess on the equinox. They also pray together as a family — not just during the equinox, but also simply when they sit down to eat together. It was extremely refreshing to see Pagan beliefs finally being portrayed with the respect that is usually reserved for Christianity.

The movie doesn’t keep things light and fluffy; it also shows how people who follow nature-based religions are persecuted. Rhea’s mother talks about how they are the last of their line to worship the goddess, because all the others were killed during the witch trials. Her mother never specifies which witch trials in particular, but since this takes place in the United States, I’m going to assume it’s the Salem witch trials. Rhea’s boyfriend also accidentally lets it slip to some boys who are bullying and making fun of Rhea that she is a witch, causing a group of teenagers from her school to go to Rhea’s house on Halloween. He never specifies that Rhea has magical powers or if it’s just her religious beliefs, but either way, the bullies run with the information. They burn an effigy in her yard, write “witch” on her family’s car window, and even kill one of Rhea’s pet goats. While Pagans today aren’t always persecuted in such extreme ways, they still deal with a significant amount of prejudice from our largely Christian society, which views their beliefs as evil. The movie shows very clearly the joy and the struggles that come from being in a Pagan family.

Despite how well this movie did at portraying a Pagan family, it unfortunately had some sexist themes — surprising for a family which worships a goddess. The romance between Rhea and Oliver, her boyfriend, was extremely unappealing. Oliver is very infatuated with Rhea. When we first meet him, the two are not yet dating, and his attempts to woo her seem borderline, if not obviously, stalkery. He reads a poem in front of Rhea’s whole class about how in love with her he is, embarrassing Rhea and causing her classmates to tease her further. She tells Oliver to stop and leave her alone, but he doesn’t; instead, he goes to her family’s art shop and buys a picture she painted. Rhea even calls him out on his stalkerish behavior, but despite all of this, she grows to see that Oliver does care for her and the two start dating. On the one hand, this is very typical for teenagers. A teenage girl who is outcast and teased will often fall for the first guy who pays attention to her, even if he is not good for her. It may be realistic, but I really disliked how the movie portrayed them as extremely loving and good for each other when the relationship started off as a boy stalking an obviously uninterested girl.

The other sexist moment came after the attack on Halloween, when Rhea decides that she is done with having magical powers and following the family’s faith and that she is going to be “normal”. She starts dressing more like a typical teen and ignores her friends, breaks up with Oliver, and starts dating one of the more popular guys in school. My issue is not with her transformation, as her response to peer pressure is again pretty realistic, but I was really confused by her mom’s reaction to her outfit when she first decides to change her look. Her mom does the “you’re not going out dressed like that, young lady” shtick, which is pretty typical of moms, but is still slut-shaming. What bugged me about it the most was how not at all revealing her outfit was. None of Rhea’s mom’s comments made sense, even from an over-protective parent. Rhea wears a shorter skirt than usual and that’s about it; she even wears black leggings under the skirt so you can’t see any skin. Other than that, she does her hair and wears make up. The most that Rhea does is dress in a way that is more typical for a teenager than her usual style. So the moment just comes off as weird and awkward, making her mother seem like some super-conservative parent who thinks skirts above the knee are immodest. This is also not really in line with many Pagan beliefs, which say that sexuality is a natural part of life, so this scene is stranger still. 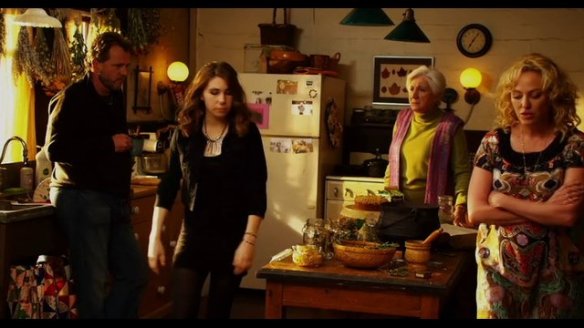 Seriously, I don’t understand why her outfit caused such a stir.

Despite these issues, though, this is a good, family-friendly Pagan-oriented movie that actually portrays Paganism in an overall realistic way. The story isn’t as strong as I would have liked and there were some sexist issues, but for the most part it was an entertaining fantasy movie that I enjoyed watching. This is definitely a movie I recommend to Pagan and Wiccan families or families that practice witchcraft—that is what really sticks with me about this movie. Here is a movie that portrays Paganism in a normal way and reaches out to a Pagan audience which usually just gets portrayed as the villains or monsters. It was really beautiful just seeing this family together practicing their beliefs and living their lives.