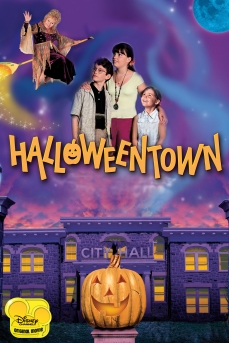 Most people have what they would consider their quintessential Halloween movie, from groan-worthy B movies to the scariest of horror flicks. While I would be hard pressed to pick the Halloween movie for me—I’m indecisive—I would absolutely say that one of them is the 1998 made-for-Disney-TV-movie Halloweentown. I mean, it’s got “Halloween” right in the title. Yet, as with most things from our childhoods, there’s always the fear that going back and revisiting previously cherished media will reveal how shitty and terrible it actually was. I’m not sure if it was by virtue of it being a Disney flick (and thus having to be pretty safe anyway) or the quality of the film’s script, but even almost twenty years later, Halloweentown, despite some problems, remains a bright spot in Disney’s filmography because it focuses on the power of family in an almost unbelievable situation.

Like many kids her age, our protagonist Marnie wants to hang out with her friends on Halloween night. She’s at odds with her mother—she and her younger sister Sophie claim that their mother would rather pretend that Halloween doesn’t even exist than let them have this bit of seasonal fun, while their middle brother Dylan agrees with their mother that Halloween is a waste of time. Though Marnie loses the argument and isn’t allowed to go out, all three of the children’s spirits are lifted with the sudden arrival of their grandmother Aggie. Despite their mother’s annoyance, Aggie has come fully prepared to deck out their home in Halloween goodness, but the merriment is cut short as it’s soon the kids’ bedtime. Before they nod off, Aggie whips out a book for a bedtime story of a wondrous place called Halloweentown, where strange Halloween-y creatures live in harmony with each other. Yet this story, too, is cut short by their mother showing up and calling Aggie to the kitchen. Silently, Marnie follows them and finally discovers the reason why her mother never got along with her grandma: they’re witches.

Also Marnie is in the book which is…. weird.

Or, rather, their mother married a mortal and wants to make her kids live a “normal” life, while Aggie wants her family to embrace their witchy heritage. While Aggie fights for the preservation of Marnie’s witch powers—if Marnie doesn’t start training by this night, then she loses her witch powers forever—the more pressing matter is that something is happening in Halloweentown (which turns out to be a real place). The citizens of Halloweentown are changing; they turn abnormally mean, then they disappear into nothing. Though Aggie has been investigating, she can’t do anything about it alone and needs the power of another witch from their family. Things turn sour as Marnie’s mother declines; however, Marnie wakes up Dylan and the two of them sneak out of the house and follow Aggie back to the bus to Halloweentown. Upon arriving, they discover that Sophie tagged along as well, so all three of them are stuck there.

After getting directions from the kind but strange mayor, Kalabar, the kids find their grandmother’s house and are recruited into stopping the “bad thing” that is infecting Halloweentown. With the power of Merlin’s talisman, the evil can be vanquished, but they don’t have the right ingredients to make the talisman work. Before they can properly gather the ingredients, though, their mother arrives and tries to take them back home. However, as the bus is not coming for several hours, they all try to find Aggie, who has been led to an abandoned movie theater by a little punkass kid named Luke. It’s there that the “bad thing” makes himself known, and it’s there where Aggie discovers where all the Halloweentown residents have gone: they’ve been frozen in place due to an evil spell. Both Aggie and the kids’ mother end up getting frozen, so it’s up to the kids to get the talisman working, which they do with little trouble.

Right before they place the talisman in the right spot, the “bad thing” reveals himself to be Kalabar. His motive is to bring the creatures of Halloweentown back to the mortal realm to cause havoc like they used to do before Halloweentown’s creation. Despite the talisman’s power, the thing that stops Kalabar in the end is the combined powers of Marnie’s family—who all end up being witches. With the day saved, Marnie and her mother apologize to each other for their hostilities, and Aggie is invited to live with them in the mortal realm henceforth, and is also invited to train Marnie in witchcraft.

Where can I get me one of these microwaves?

One of the most charming things to me about this movie is similar to what Lady Geek Girl talked about in her review of The Last Keepers, and that’s how normalized everything is. Though the witchcraft in this film isn’t tied in any way to religious practices or spiritual beliefs, within Halloweentown it’s as normal as paying bills or going to the grocery store. What could have been inaccessible to Disney’s audience is instead relatable and approachable. Witches can ride brooms, yes, but they also take buses and cabs with as much frequency. Before reaching into her spellbook for the brew to make Merlin’s talisman activate, Aggie tries, instead, an instant witch’s brew which she cooks up in the microwave. If that’s not the most relatable thing, I don’t know what is. While it’s not necessarily the most important point of the movie, I do think it falls in line with one of the film’s theme of “don’t judge a book by its cover”: just because something is supernatural doesn’t mean it has to be scary or even abnormal.

The other issue this film spends a lot of time covering is the trust between parents and their children, and how both parties should probably give the other a little more credit than they’re inclined to do. Marnie’s mother openly dislikes everything to do with Halloween and witches in her pursuit of being a “normal” family, but this means that she, too, has to stay silent when her kids are showing signs of magical aptitude. Marnie is confused as to why she has deja vu so often while Sophie seems to be able to get what she wants just by wishing for it—if she wants a cookie, it starts floating over to her, even without her noticing. When Marnie begins arguing for her right to be trained as a witch, her mother immediately shoots it down, saying that there are things about Halloweentown and witchcraft that Marnie couldn’t possibly know. Understandably, Marnie gets pretty fed up with her mother not believing in her and trying to keep her from her birthright. The film, too, never paints Marnie’s mother’s overprotectiveness as a good thing; the narrative shows Marnie’s anger at almost losing her magic for good due to her mother’s efforts as acceptable, and it’s only through the combined powers of everyone in the family that Kalabar is stopped. However, the mother, too, is completely justified in fearing for her kids: there are lots of things in Halloweentown that Marnie and her siblings have no idea about, and wanting a normal life isn’t wrong in and of itself. What Halloweentown asks of its audience is for better communication—nothing good came from hiding things, even with the best intentions. Parents are allowed to worry for their kids, and kids are allowed to have their own opinions and want different things from their parents, but when there’s no communication between the two parties (or it feels like the two parties can’t talk to each other without arguing), that’s when troubles really appear.

As with most things, Halloweentown had some completely unnecessary romance subplots. After they find that the bus back to the mortal world is indisposed, Marnie’s mother drags the kids to the mayor’s office to maybe get some help. Kalabar, though, is less interested in helping the family and more interested in reminding Marnie’s mother about how much fun they used to have when they were dating. The scene is somewhat uncomfortable, not least of all because Marnie’s mother is clearly uncomfortable as well (but keeps a smile on her face because when you’re dealing with a powerful warlock in a governmental position, what else can you do), but also because it doesn’t have to be there at all. Sure, later on Kalabar reveals himself to be the big bad and goes into some monologue about how he’s still pissed that she married a mortal guy rather than himself, but why? The film takes a hard shift to putting the blame on Marnie’s mother for Kalabar’s descent into evil rather than sticking with “Kalabar just wanted to fuck shit up and have power over Halloweentown and the mortal realm.” 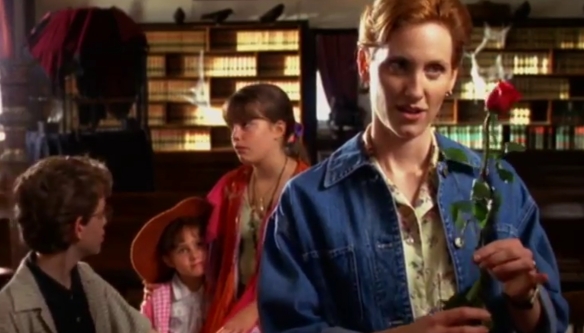 Furthermore, the first lines Luke (the little punk that got Aggie and Marnie’s mother frozen) says are to imply that Marnie should hang out with him because he’s the cool guy in town. Which is fine because Marnie tells him to buzz off. However, after revealing himself as Kalabar’s partner in crime, he laments that his part of the bargain—becoming handsome—wasn’t worth it because he never even got to go on a date with Marnie. This absolutely doesn’t make sense. Marnie hasn’t even been in Halloweentown for a day; how could he be pining for someone he’s seen literally two times at the most? This isn’t Romeo and Juliet, and even if it was, it would still be bad. But even though Luke has done the bare minimum—decided that, hey, maybe Halloweentown shouldn’t be ruled by Kalabar after all, and started helping Marnie and her siblings—he is still rewarded with a kiss from Marnie. I will admit that as a kid I was totally all about this—they were my Halloweentown OTP—but as an adult it seems both shoehorned in there for the sake of just being there and it reinforces some really shitty messages, taking away the spotlight from the power of Marnie and her family.

However, in the end Halloweentown remains a fun, family-friendly movie even without the rose-tinting from the nostalgia goggles. Even as an adult there were a lot of jokes I caught onto that went over my head as a child, so if you haven’t seen the film for a bit, there’s still something for you. Maybe for your Halloween you’d rather go creepy or more mystical, but if you get the chance, I’d highly recommend popping in this oldie but goodie and settling down for some good (actually good) 90’s fun.

1 thought on “Season of the Witch: Halloweentown Still a Blessing Twenty Years Later”