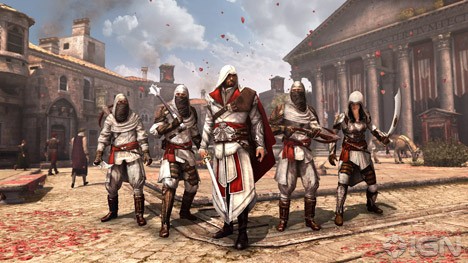 I want to start this post off by saying that I don’t hate this game. I actually ended up enjoying the gameplay a lot more than I did its predecessors. And again, as someone who used to live in Italy, there’s a really strong nostalgia factor for me when a game allows you to run around Rome for 20+ hours. But not hating the game is a far cry from enjoying everything it had to offer. The first two games had their issues, like all stories do, but their problems are much easier to ignore. Brotherhood, again following the character Ezio, has a lot of the same strengths and weaknesses that Assassin’s Creed II had, but the game’s characterization missteps are much more apparent. And it’s the portrayal of one character in particular which nearly ruined this story for me: Lucrezia.

Trigger warning for rape, incest, and victim-blaming up ahead.

Assassin’s Creed: Brotherhood finds us back with Ezio as he goes about restoring the Assassin Order and dismantling the Templars’ control on Rome. Eventually, he comes into possession of the Apple, which he hides beneath the Colosseum. Now aware of its location, in the present day, Desmond, Lucy, Shaun, and Rebecca go to retrieve it. Unfortunately, when Desmond picks up the Apple, another person from the First Civilization, Juno, possesses Desmond and forces him to murder Lucy. After this, Desmond falls into a coma.

There are a good number of things about Brotherhood I really liked—Ezio’s sister Claudia gets a bigger role in the story this time around and we even get to see her become an Assassin. Caterina Sforza makes a return as well. I wasn’t too happy that her character ended up being damseled for a good portion of the time we see her—she is arrested and Ezio must save her—but her arrest is something that actually happened, so I can’t fault the story too much there. Still, other than her incarceration, she was fun to spend some more time with. Interestingly enough, even though Ezio decided to let Rodrigo Borgia, the head Templar, live last game, that did not screw him over this time around. Rodrigo actually ended up having no plans to retaliate against Ezio. Instead, his son Cesare attempts to destroy the Assassins and even manages to murder Ezio’s uncle in the process. This is something that Rodrigo doesn’t approve of, and I was pretty happy that the story didn’t completely give into a “mercy is useless” narrative like so many others.

Unfortunately, I can’t be too happy about these things. Rodrigo is a child rapist, because you know, being an evil murderer wasn’t enough to convince us that he’s a horrible person. Furthermore, being shown mercy doesn’t exactly stop him from working with the Templars either. Of all the characters to show mercy to, he would not have been my pick. We meet two of Rodrigo’s children this game—his son Cesare, who acts as our main villain, and his daughter Lucrezia, whom they both sexually abuse. Assassin’s Creed has not quite irrevocably pissed me off to the same extent as True Blood or Game of Thrones have, but this installment certainly tried its best to be nearly unbearable at times. There were allegations of incest surrounding the real Lucrezia Borgia, and they were never proven. But even if they were true, they don’t necessarily need to be included in the story unless they actually add something. Thankfully, to Brotherhood’s credit, I will say that Lucrezia’s victimization did serve a purpose in the story, and that’s a lot more than I can say about how other stories handle rape. 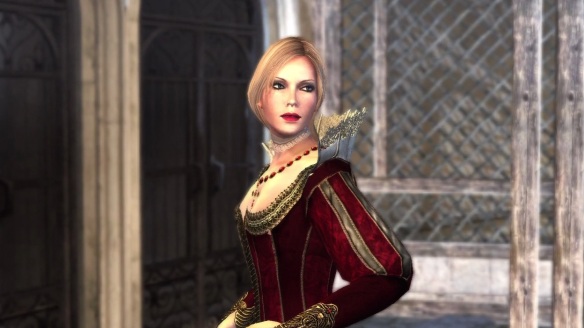 We first learn about Lucrezia during Assassin’s Creed II, when she is just a child. Shaun, our history buff, tells Desmond that Rodrigo had a “close” relationship with her, but we don’t really get to meet her until Brotherhood when she is in her early twenties. She accompanies Cesare’s attack on Ezio’s home in Monteriggioni and later is present during Caterina’s arrest. As the story unfolds, we learn that Lucrezia’s relationship with her brother is not as happy as she always perceived it to be, and she takes a lover to make Cesare jealous. Her lover plays a key role in allowing Ezio to gain access to the Papal apartments during the final missions, and eventually Lucrezia betrays her father when Rodrigo tries to murder Cesare. Almost immediately afterward, she discovers that Cesare never loved her at all and only saw her as a sister he could use and manipulate. When Lucrezia finally recognizes their relationship for what it is, she betrays Cesare by giving Ezio some much needed information about the Apple.

Lucrezia is not an innocent victim—her abuse has convinced her she loves her brother, and so she actively participates in Cesare’s attack on the Assassins, manipulates people, and does not care that Cesare might have raped Caterina (this is something Caterina denies when Ezio asks her about it, so take from that what you will). Lucrezia’s victimization doesn’t excuse her actions, but it’s not hard to read between the lines and realize that these actions are also the result of abuse and manipulation. She is coerced and her relationships are toxic. I don’t even blame Brotherhood for having this storyline, because it’s actually a big part of the plot, which means that in a lot of ways, the writers didn’t add this kind of misogyny and abuse just as a background decoration. Cesare’s possessive and controlling behavior led to his downfall, and this is something that builds over the course of the story.

The problem here is that serving a purpose is not enough. Brotherhood proved that it was unable to treat its subject matter well. To start off, all the characters know that she’s abused. I guess this is because the Powers That Be told them, and while Ezio thankfully never attempts to kill her and even tries to save her from Cesare, meaning that he does view her as a victim and not an enemy, Lucrezia is victim-blamed by the other characters. Caterina openly and publicly mocks her for what her brother and father do to her, and all the slut-shaming that takes place between the two characters was really unnecessary. There were times when I felt as though the narrative thought of Lucrezia as a joke due to her situation, and that’s not acceptable. I understand that Caterina was also victimized this game, but when she mocks Lucrezia’s home life, we are meant to side with her and look down on Lucrezia for this. The narrative pits two rape victims against each other and belittles one of them in the process.

Lucrezia’s story should be a sad one, not a joke. When she discovers that Cesare never really loved her, it causes her immense pain. She’s confronted with her abuse and can no longer hide behind the imaginary tale that her brother raped her out of affection. The scene in question is more or less fine in how it’s presented, but when we combine it with earlier scenes, the context changes. I felt as though the story thought of her as stupid or naïve for not realizing all this sooner, and her character really deserved better than that.

I don’t think that stories should never use heavy topics like rape and abuse, or that victims need to be a picture of innocence, but the issues need to be handled with care. If a story doesn’t know what it’s doing, it can very easily send the wrong message, and in this case, Brotherhood did just that. When we combine this with Caterina’s potential rape, Lucy’s murder, and Ezio’s mother dying off screen (her death isn’t even mentioned), Brotherhood ended up being the worst game for female representation all the way around. I knew that the Assassin’s Creed games had a problem with female characters when I got into them, and while I’m not happy about that, at the very least I didn’t find the first two installments completely insulting. Assassin’s Creed proved last game that it was capable of writing female characters well, and when it comes to Lucrezia, the same thing could have been true. She didn’t need to be innocent or a good person—the context that her trauma was presented in, however, most certainly needed to be changed.

2 thoughts on “Assassin’s Creed: Brotherhood: Okay, This Series Has Some Issues”