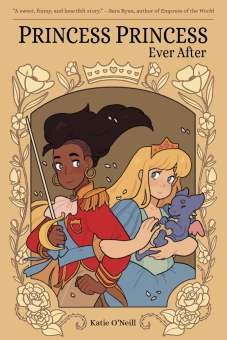 I’m so tired, y’all. This election season has been hell and I’m so glad it ends tonight because I don’t know how much longer I can stand it. I am full of easy-to-write-about rants regarding everything from Frank Cho to Johnny Depp but I’m so tired of negativity that I want to talk about something pure instead.

Spoilers for Princess Princess Ever After below.

Princess Princess Ever After is the story of, well, two princesses. Princess Sadie has been trapped in a tower by her evil sister, and Princess Amira has run away from home to escape the weight of royal expectations. When Amira encounters Sadie in her tower and offers to rescue her, Sadie is intrigued in a way she hasn’t been with the dozens of princes who have happened by.

Out of the tower, Sadie and Amira travel the countryside, going on adventures and making friends. However, Sadie’s sister is not pleased. She kidnaps Amira, and it’s up to the self-identified crybaby Sadie to get her back and put an end to her sister’s evil deeds.

It’s a quick read and an adorable queer love story, and despite being short, was well worth my money. It’s unclear whether homophobia exists in Amira and Sadie’s world—it’s shown that at least part of the reason Amira ran away was because she was expected to marry a prince, and she wasn’t interested—but no outright hatred stains the story, and no one seems to cast any aspersions on Sadie and Amira’s relationship either. It’s also fat-positive: Sadie feels bad about her weight at first, but eventually comes to embrace her whole self, challenging her sister for ever making her feel that the way she looked was a bad thing. The story gives us two different examples of princesses being heroes: a more physically powerful, sword-fighting, pants-wearing warrior princess, and a fat, weepy, dress-wearing, empathetic princess, and reminds us that there’s no one right way to look or act in order to be brave or strong. 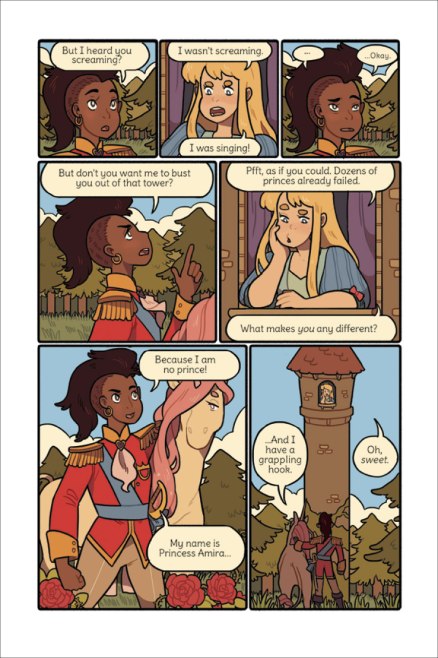 via The Mary Sue

There are some issues inherent in making Amira the more warlike and butch of the two compared to Sadie’s soft, emotional, femme presentation, as there is a tendency to cast women of color in “always the supporter, never the damsel” roles. However, I think that O’Neill sidesteps this by having Amira be the one who gets captured in the climactic fight, leaving Sadie in the role of rescuer. This helps to balance out what could otherwise be seen as a problematic contribution to a tired trope. It also evens out their dynamic by starting the story with Amira saving Sadie, and ending it with Sadie rescuing Amira.

The eagle-eyed Tumblr veteran may notice that this whole scenario sounds familiar. That’s because Princess Princess Ever After started out as simply Princess Princess, a forty-five-page webcomic posted to O’Neill’s Tumblr. Similar to Nimona, another webcomic that made the jump to print publication, the book is a faithful reproduction of the online comic, accompanied by a print-exclusive epilogue. Despite being made up of mostly content I’d seen before, I was still excited to see the story in lovely hardcopy on display at, to name a few, my comics store, my local Barnes & Noble, and the Oni Press booth at New York Comic Con, and I was just as excited to purchase it. While it was presumably originally made for an audience of teens or older (presuming Tumblr users aren’t lying about their age on the Terms of Service), a print version gives it a new market of the people that it actually seems targeted toward: little kids. The story is totally innocent, with no more sexuality to it than you’d see in a Disney movie—hell, less, because Sadie and Amira’s kiss at the end is more noses touching than mouths. 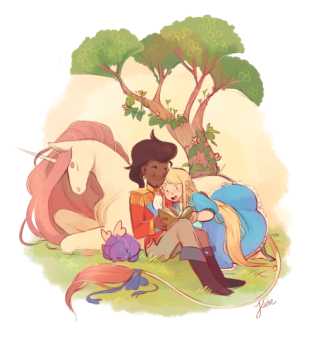 This kind of all-ages representation is so important for normalizing queer attraction to younger readers, whether they’re queer themselves or just learning to accept other peoples’ differences. It’s exciting to imagine the potential of this story to help open the minds of young people who would have never encountered it online.

There’s not a lot to Princess Princess Ever After, but it’s a perfect, lighthearted, and precious take on a fairy tale romance with wlw protagonists. And at worst, at least reading it will take your mind off the horribleness of the world for a little while. I definitely recommend picking it up and putting some joy back in your day!

3 thoughts on “Princess Princess Ever After Is Precious and Perfect”