Given the current state of the nation, I think it’s fair to admit that a lot of us are reeling and suffering from the recent election results. While I absolutely respect and encourage those who are able to go out and protest in any way they can, sometimes we all need a little diversion from the shittiness that’s been thrust upon us. While for me this usually manifests in playing Harvest Moon or fiddling with the slew of dollmakers on Rinmaru, I just so happened to come upon another great game for when you really want to disconnect from the real world for a bit. If you’re a fan of internet dress-up games too, then you’ll adore Style Savvy: Fashion Forward.

The title’s a bit of a mouthful, but Fashion Forward is the third entry in the Style Savvy series, the second available in the U.S., and the first one I’ve ever played. Fashion Forward’s story starts off after reading a letter from your grandmother that happens to have a key in it. The key opens up the small dollhouse she used to own, but surprisingly, once the dollhouse is unlocked, a miniature-sized girl comes walking out. Her name is Sophie and she used to know your grandmother. Furthermore, she tells you that your grandmother used to own a boutique back in the miniature world—more specifically a place called Beaumond City. After some magic, you too are teleported into the miniature world to the Beaumond boutique to follow in your grandmother’s footsteps and bring some life back into the now-dour city through fashion.

I know this isn’t the type of game I usually play, or at least the type I usually review for LGG&F, but I was really interested in finally sitting down and playing a game that fit squarely into the category my “Games for Girls” series targeted. The series looked at the oft-joked-about video games targeted toward a younger female demographic and explored how these games were typically better than the reputation that preceded them. I was apprehensive about Style Savvy at first, I admit, yet my friends who played this installment and the other games previous had nothing bad to say about it, so who am I to turn down a good gaming experience? To my surprise, Fashion Forward was a surprisingly deep game. As you help your customers find clothes they like—sometimes they’re really picky—more clothing brands become available to choose from, and as more brands open, the more you have to balance what your boutique actually stocks, as you have limited inventory space. For me, I keep a lot of “girly” and “bold” clothes, which typically leaves me screwed if anyone comes in looking for “boho” or “sporty” clothes. Your job in Beaumond City doesn’t end there, though. Through gameplay, you’ll eventually open the salon and the make-up studio (both places where you can work, unlock more styles, and make money) and you can take a dip into interior decorating with the Chateau—a dollhouse within a dollhouse—where your customers will ask to stay in your rooms like you’re running a hotel. Furthermore, if your rapport with a certain brand is high enough, they may ask you to create an article of clothing for them, which in turn will send you out looking for “inspiration” so you can finish the piece to their specifications. There is a lot to do, and not entirely unlike Animal Crossing, there are new things to discover all year long.

Games like Fashion Forward run the risk of being viewed as enforcing harmful stereotypes for younger girls. I think we’re all sick of the trope of the teenaged girl/woman who does nothing but shop, which has no other purpose than to point out how materialistic women are. However, I believe that Fashion Forward manages to side-step these tropes by making the customers actual characters. With each new person you meet in Beaumond, you get a little dossier on them saying their name, their likes and dislikes, and what they do for a living. Although this doesn’t really play into much of anything, it does give the illusion that once they’ve finished their business in your store, they have other things to take care of. However, beyond this, the dialogue the characters share with your character before and after purchasing something gives them an agency I wasn’t expecting. Certainly sometimes they come into the shop to buy something just because they want to, but other times they’re actively seeking to make themselves into the person they want to be. There are customers who look for more professional attire so they’ll be taken seriously in the workplace, and customers who hope to find confidence from a piece of clothing so they can adjust to studying in a new school. These tiny tidbits end up creating mini character arcs as the same customers keep returning to expand their wardrobe, sometimes eventually leading to them making friends with other characters due to their shared interests in one specific style.

Fashion Forward is also shockingly inclusive in the way that you can expect a store simulator for a younger audience to be. Beyond your own character creation, your customers are of many different races: Beaumond is not a city just for white people. I do wish there were options for more natural hairstyles for Black characters, but given the somewhat random generation of the customers, it may be better to avoid the possibility of a bunch of white girls with dreadlocks running around. Though the truth of the matter is I may have just not unlocked them yet given the game’s expansive list of unlockables (I mean, I’ve only had the game for a month…). Even if that’s the case, at least a couple of natural hair options should be available from the beginning. 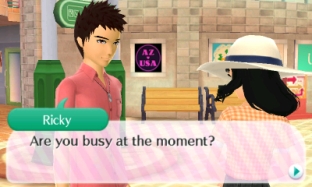 Ricky is in charge of putting together Beaumond’s fashion shows, in addition to being super supportive of all fashion everywhere.
via xyzzysqrl @ LiveJournal

Additionally, Fashion Forward doesn’t exclude guys from joining in on the fun. While yes, it’s fair to say that we don’t really need another game catering to guys, I think it’s important to allow guys the chance to express themselves through activities that would stereotypically be considered girly. After the main story of the game is complete, you’re able to dress the guys who hang around in Beaumond City, which you weren’t able to in previous installments. However, the player-created character can only ever have a feminine body: maybe the next game will allow players to choose. (Although with that comes the hope that all clothes would then be unisex rather than keeping the guys from skirts and the ladies from suits, for example.)

Speaking of the men in Beaumond City, they’re always there to support their girlfriends, friends, and sisters. While there are some conversations about how their lady companion has a purse already and she doesn’t really need a new one, every decision the customer ends up making is supported by them in the end. Furthermore, the ladies in Beaumond don’t take shit from the guys either. For example, rather than allowing themselves to feel infantilized, some refuse to be called “cute”, instead demanding that they be called “beautiful”. It’s a small thing, but it reinforces the idea that sometimes things that sound like compliments aren’t necessarily compliments, and it’s okay to call that out.

People deal with stress and trauma in different ways, but if you’re like me and find it easiest to chill out with a good game beside you, I highly recommend Style Savvy: Fashion Forward. It’s not a game for everyone, but I find something incredibly relaxing about prettying up people, especially when part of the reward is making them feel better about themselves and boosting their confidence. While it’s not necessarily perfect on the diversity front, it’s miles ahead of some bigger titles out there and also reinforces some nice messages for its target audience. If you can, check it out for the 3DS as soon as possible! Also, I’d recommend reading this article from Gita Jackson, which discusses how the game encourages girls to explore their own individuality and reinforces the idea that girls and women alike should take pride in who they are and should never feel like they have to apologize for it.