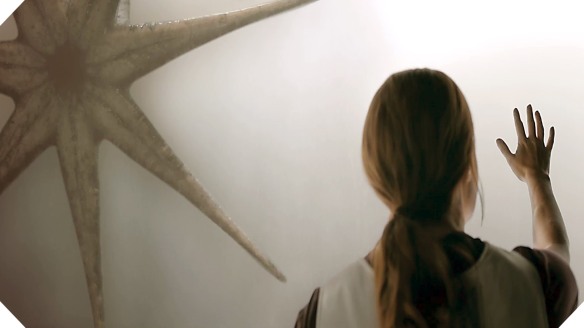 Normally I’m a spoiler hound, but while some experts argue that spoilers can enhance enjoyment of a story, I’m not sure if that’s the case for Arrival. Saika reviewed the trailer, but I’m not sure I even saw that one, and I’m almost glad I didn’t. Not knowing anything much beyond “aliens invade and someone tries to talk to them” made the movie more suspenseful. Arrival is the most original sci-fi movie of the year. It’s based on Ted Chiang’s short story “Story of Your Life”, which was nominated for and won a handful of awards back in 1999. It’s no wonder it was turned into a movie. Most alien movies are about humanity fighting off the evil alien invaders. Arrival is different. It’s a story of a linguist trying to help humanity establish peaceful relations with alien visitors. Arrival is probably going to end up on the list of movies all the cool philosophy professors show to get their undergrads to think about the nature of memory and free will. Wrapped up in suspenseful alien invasion trappings, Arrival is really about how a human may cope once her experience of time is no longer linear. If you could see into your own future, what would you do?

Spoilers abound after the jump.

Arrival is the story of Dr. Louise Banks’s (Amy Adams) encounter with an alien race, and how it permanently alters her life. Banks is a world-renowned linguist and one of those professors many of us have had who, even while the world comes to a standstill when twelve alien ships (“shells”) appear over the earth, won’t cancel class. Colonel Weber (Forrest Whitaker) wants her help translating an audio recording of the alien language, but Banks insists on meeting the aliens in person. She proves just how good she is when she asks Weber to test his second choice expert with defining the Sanskrit word for war. The second choice guy says it’s “an argument”, but Banks says it specifically refers to a “desire for more cows”. This exchange foreshadows the primary Earth-based conflict of the movie: mistranslation arising from too many assumptions.

On the way to the Montana alien landing site, she meets theoretical physicist Ian Donnelly (Jeremy Renner), and together their teams try to find an answer to the big question: “What is your purpose on Earth?” Banks convinces Weber that they need time to establish a basic vocabulary before they can figure out an answer. Teams all over the globe are sharing information with one another. While Banks can’t find a way to verbally communicate, she quickly discovers that the aliens (“Heptapods”) have a written language. It looks like a very primitive form of Gallifreyan, primarily utilizing circles and curls and lines to mean different words in a sentence. Using dry-erase boards and their teams of analysts, Banks and Donnelly work with two Heptapods (whom Donnelly names Abbott and Costello) and are able to cobble together a working vocabulary in about a month. Meanwhile, other nations are making progress. China figured out a way to use the picture tile game Mahjong to communicate with their Heptapods. Soon the world discovers that China finally got an answer to the big question: “Use Weapon”. Banks sees the problem immediately: there’s no way to know if the “use” refers to Heptapods or humans, or if it means something like “give”. “Weapon” could also mean “tool” or “technology”. Because the Chinese were using a game, they could have assumed an element of competition or aggression that wasn’t intended. Nevertheless, the Chinese military goes on lockdown and stops communicating with the rest of the sites. Soon Russia follows suit, as well as all the others. Everyone is in the dark, the public is protesting, and media talking heads are calling for military action against the Heptapods.

Throughout her experience working with the Heptapods, Banks keeps having strange visions or dreams of what seem to be memories. We find out Banks is divorced and has a daughter. Her daughter is diagnosed with a rare condition and begins to succumb as a teen or young adult, and dies. These “memories” are startling to Banks. Banks realizes that the Heptapods don’t have a linear experience of time (hence the circles). Human experience goes in one direction; the past stays in the past and the future is yet to be experienced. As Banks begins to understand the Heptapod language, her own mind begins to experience time like they do. In a very real, visceral way, Banks is remembering her own future. Banks uses the memories of her own future to “remember” a book she will write on the Heptapod language (effectively allowing her to understand all of it immediately), calls the Chinese general on his private line and convinces him to stand down, and learns that the Heptapods came to offer humanity the gift of non-linear experience of time so that humanity can help the Heptapods with some unknown problem in three thousand years. She saves the day with her new personal-future-seeing powers.

It’s about this time that one of the cleverest turns in the movie occurs. The audience sees most of Banks’ memories of her daughter at the beginning of the movie. To us, it looks like the death of her daughter is what makes her so stoic and serious. But it turns out that all of that is yet to come. Banks was remembering her future the whole time, and only just now met the father of her child and future ex-husband, Ian Donnelly. Banks knew her marriage was going to end, and that her daughter was going to die prematurely, and chose to embrace that life anyway. Donnelly, on the other hand, leaves Banks when she tells him about their daughter’s fate. The audience is left to ponder whether this is fate or free will. If Banks sees her future, is she able to change it? We don’t know, because she chooses to embrace her whole future, despite the tragedy she knows she’ll face. We don’t know why she does it, either. Maybe it’s because the time she spends with Donnelly and her daughter is worth it; clearly Donnelly would have liked to have made an informed decision before they decided to have a child. What’s most important to the plot is that Banks has made peace with her decision.

Donnelly gets the short end of the plot stick. The movie hints that he also has the ability to see his future, when he asks if Banks is also experiencing any weird dreams. But this point never goes anywhere. Banks tells her daughter that Donnelly left because she told him something he “wasn’t ready for”, heavily implied to be that their daughter would die young. If Donnelly could see his future, why didn’t he see their daughter’s fate? If we had spent more time with Donnelly’s experience of nonlinear time, or found out why he leaves Banks, it would have helped flesh out the question of free will the movie raises implicitly, and help us better understand the way the Heptapod language works.

But the most difficult element of Arrival is its plot construction. The pacing suffers partway through the film. It’s exciting at the beginning and the end, the middle dragged its way through contemplative ideas. Most of the time I don’t really notice if movies have poor pacing issues, so I’m sure many of you may get bored halfway through. Be patient; the end is worth it. I’m not sure the finish would be as powerful if the middle weren’t the way it is. Most of the plot seems to follow a pretty realistic internal logic, but the end where Banks “remembers” the Chinese general giving her his personal number at a United Nations party so that she can use it in the past/her present felt a bit too convenient. Even more, when Banks “remembers” receiving a copy of her book on translating the Heptapod language she reads her future book and is able to instantly understand the whole language. Banks is clearly a genius, but I’m not sure I can believe her memory is that good.

As far as diversity goes, Arrival is fair to middling. It’s partly a victim of the “white woman and Black man equals diversity” trope, but if you made this movie ten years ago, I’d bet the producers would have changed the lead to a man. The big enemy on Earth is the Chinese general, Shang. Most of the film he plays the generic Evil Communist Warhawk enemy of America, until we see Banks “remember” her conversation with him at a celebratory gala, in which he gives her his personal phone number and tells her his wife’s dying words to him so she can make his past self listen to her. Jeremy Renner’s Ian Donnelly fills the comic relief, concerned companion, and sexy trophy reward spots that would normally go to the female co-lead. In that, it’s a nice reversal. The woman saves the day and gets her man, but they don’t get to ride off into the sunset for their happily ever after. Banks’s life is more complicated than that. If this were a traditional alien invasion movie, our hero would get their perfect happy ending. But this isn’t your traditional alien movie, so this complex ending fits with the themes it explores. We get the impression that Banks’ life includes tragedy, but it’s not a tragic life.

But above all, Arrival is a celebration of human ingenuity that promotes peace and collaboration for a more wonderful tomorrow. Banks uses her brain, not brawn, to solve problems. The movie shows us how fighting and war and aggression get in the way of real communication, progress, and prosperity. The Heptapods arrive with a message of peace and a call for help in their (future, for us) time of trouble. She’s able to convince humanity to put down its weapons and talk to one another. Learning to speak Heptapod helps her gain a much deeper appreciation of her own life, both the good and the bad. It reminds us that even while our lives certainly include moments of real tragedy, that tragedy doesn’t take away from other moments of hope, beauty, joy, and awe. It doesn’t make them unimportant. I can hardly think of a more perfect message for Americans right now, when so many of us are angry and afraid of what our future may hold.

4 thoughts on “Story of Your Life: Arrival Movie Review”