Dear readers, I cannot stress the importance of conventions enough, as I still have comics from New York Comic Con to talk about! The reason these experiences mean so much to me is that you can simply walk around with the hope that something catches your eye, and Hyper Force Neo definitely fits that bill. The title features a Black main character, a Black author, Jarrett Williams, and an aesthetic that was totally my style (think Steven Universe meets Scott Pilgrim), so I had to give it a shot. 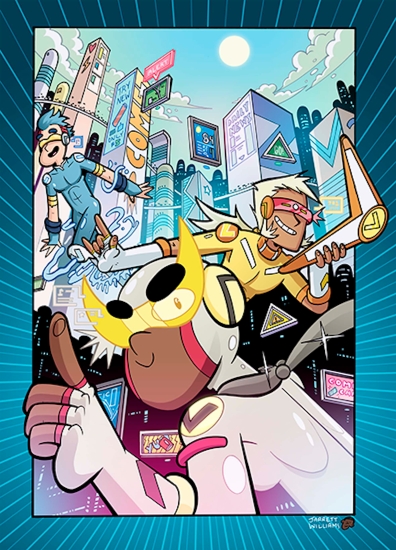 The story follows Dean Masters, who is starting his first day of 9th grade. It starts in medias res, showing a giant mech battle. Dean is on the ropes and begins a “how I got here” explanation. Dean starts high school, meets a student new to the district at lunch, tries out for track, and works an activity fair for the school and city the next day. Basically, it plays out like a slice-of-life story at first, with interspersed cutaways of alien activity. The book doesn’t explain what exactly they’re doing, but it’s building plot for later. During the fair, Dean has to retrieve some supplies from a basement and stumbles upon a magic key. This gives him the ability to summon power armor and a giant mech. The volume ends with Dean fighting the leader alien from before, both in giant mech, returning the reader to how the story started.

Hyper Force Neo runs at a very snappy pace without too much fluff. The majority of the content is worldbuilding; there isn’t a lot of exposition, but it really fleshes out the world that Dean lives in. It is a very technological society with some traditional cyber tropes. People have absurdly shaped hair styles, there are robots casually living among the humans, and every part of life seems integrated with technology. This bleeds into the art style, which has video game influences. For instance, when characters target enemies, you can see the crosshairs that they see. Additionally, characters reference their health points and energy and can complete combo moves. The book also has heavy use of “boss titles” or pop-up boxes to marry comic book flavor with video game flavor. Together, the styles reinforce the aesthetic of the story, and that aesthetic is technology, full stop. Technology is everywhere in Neo’s New Sigma City, making the plot firmly rooted in futuristic science fiction. Every inch of the pages shows interesting visuals and just how cool it would be to live there.

Yet that might be the book’s biggest weakness. Many of the pages felt overwhelmingly dense to me. I don’t absorb comics particularly fast because I like to look at every little detail of the art for references, jokes, or foreshadowed details. After all, the artists put those things there for a reason. And I do appreciate the commitment to packing in so much content, but it sort of created an anxiety that I might be missing some detail, or wouldn’t understand a plot thread later on if I didn’t read every nook and cranny of every page. For example, after Dean leaves track practice with his new friend, we’re given a shot of New Sigma City and its railway system. There are giant statues, buildings, hovering cars, as well as dialogue and pop up boxes imitating their mobile devices. On the adjacent page, we get a similar, but less dense, overview of the arcade. While some of those pop ups are flavor text, time of day and explanation of the rail’s prices, some are much more important, such as what their mobile devices are and how they work. For me, that’s the biggest inconsistency: how can the reader know what is absolutely vital to know and what is just a tidbit? All of the details just made me feel overwhelmed. 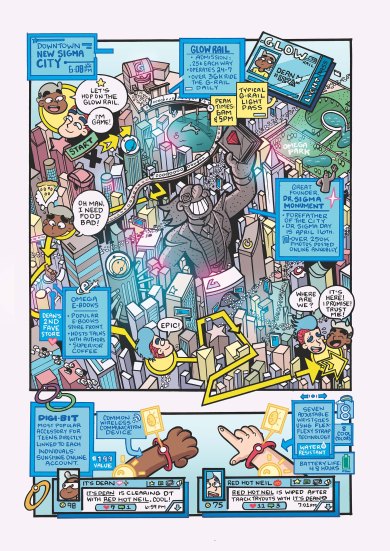 This, I think, highlights the major problem. As I said before, the plot is fairly thin. It’s enjoyable, and I think the writer was trying to avoid infodumping, but I kind of got the idea that they didn’t know what to focus on. What details should I take away, and which should I forget about? Am I rooting for Dean, or just against the villain? The bad guys certainly seemed bad, but not any more than typical punch-clock villains. They weren’t evil, just jerks. Dean didn’t seem particularly heroic either, or have a tragic backstory (which, to be fair, is refreshing); he’s just kind of a cool guy. The character building was decent, though. Beyond Dean, there is another Black man who runs the arcade. He has red dreads and a pink laser arm. Something notable about Neo is that it doesn’t feel the need to mold the characters around typical masculine tropes. Frequent star and smiley face motifs enforce this to build a soft masculinity. I do wish there were more female characters in the story, however. So far, the only notable female characters are one of Dean’s friends, who is the champion at most of the arcade’s games, and the leader alien, who pushes the villainous plot. I don’t think these characters are poor representation necessarily, but I think they could certainly be fleshed out more. These issues might be cleared up in the subsequent follow up, but for the introduction, it just felt like it could have been stronger.

That said, I definitely enjoyed Hyper Force Neo. Again, the art style is really lovely to me and more stories with protagonists of color is always a good thing. The technology-based world of New Sigma City is one that I’d like to reside in, and the characters are likeable (or appropriately annoying). I do wish there were a few more details about the major characters, and a few less about the setting, but I assume that issue will resolve itself naturally as the plot marches forward. Unfortunately, the series was cancelled as a monthly affair, but will be published as a complete graphic novel. I look forward to what it becomes. I give it a solid 7/10: won’t be for everyone, but I recommend it to most people who like science fiction, giant robots, cute art, and fun stories.