It’s a strange and wonderful thing to be diving back into the world of Harry Potter, a franchise that so many people around my age literally grew up with. There was certainly a lot of pressure on the new film Fantastic Beasts and Where to Find Them to transport us back to a world we all knew and loved, and I’m happy to say that while it certainly differed a lot from the series of films starring Harry and the gang, it was generally delightful. It made a lot of good storytelling choices, introduced a lot of great characters, and really invoked a sense of wonder, which is what every Harry Potter story ought to do. There were a few small hiccups in execution: specifically, some elements of the magical world seemed incongruous with the rest of the stories. Even with that considered, however, nothing significantly detracted from the overall experience, and I came out of the theater excited to learn more about Newt, Tina, and the American wizarding community. 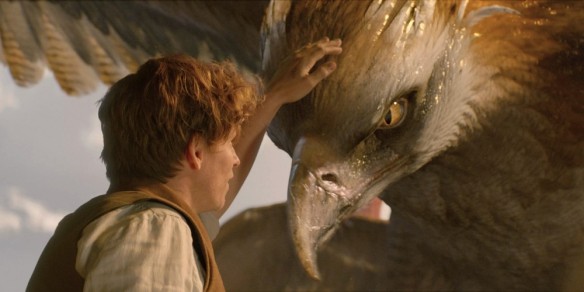 Our incredibly awkward but very determined hero, Newt Scamander, arrives in New York City in 1926 with nothing but a strangely wiggly suitcase and a rather vague “official” explanation of his business. Unbeknownst to him, mysterious destructive forces have been at work in New York, prompting a movement of witch-hunting fanatics called the New Salem Movement, headed by Mary Lou Barebone and supported by the small army of brainwashed children she has adopted. The good-natured but bumbling Newt loses no time misplacing a magical creature he has brought with him, drawing the attention of a magical official named Tina Goldstein and a non-magical bystander named Jacob Kowalski. In his haste to set things right, Newt accidentally swaps suitcases with Jacob, and Jacob accidentally opens Newt’s suitcase, setting loose several mischievous beasties that Newt, Jacob, and Tina have to frantically try to retrieve.

Meanwhile, the Magical Congress of the United States is trying frantically to get to the bottom of whatever magical force has been razing buildings and terrifying no-majs (aka Muggles) throughout the city, risking the exposure of the wizarding community. When Seraphina Picquery, the president of the Magical Congress, gets wind of Newt’s critter problem, she and an official named Graves try to pin the whole mess on him. It turns out, however, that Graves has known all along that the destruction is being caused by a badly abused child with exceptional magical powers losing control of their abilities in terrible ways. Graves is actually Grindelwald in disguise, and is actively encouraging the mayhem. He hopes that the random attacks on the Muggle world will force Muggles into an all-out war on the wizarding community, a war that wizards are sure to win if they have no choice but to fight back. 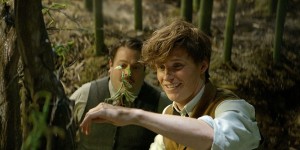 As a character, Newt is a refreshing sort of hero. He really struggles with some social and interpersonal challenges, and not in the “lovably quirky” movie-friendly way we’re all surely sick of seeing. He has a demonstrably hard time carrying conversations, making eye contact, and expressing himself articulately. He’s so committed to the conservation and study of magical creatures, however, that he doesn’t let any of that stand in his way, in spite of being mocked and looked down on. I’m certainly not a psychiatric professional by any stretch, but it seems to me that Newt demonstrates a lot of the symptoms commonly associated with autism spectrum disorders. It’s admittedly not fair to consider this neurodivergent representation: it isn’t explicitly acknowledged in canon, and in a 1920s setting it would be difficult for any neurodivergent conditions to be acknowledged, because the terminology and diagnostic criteria simply didn’t exist at the time. Even so, it provides a nontraditional main character that neurodivergent people may feel a more personal positive connection to. I certainly hope that this aspect of Newt’s character will be explored and discussed going forward, at least as far as the genre will allow. 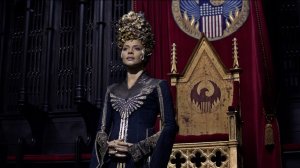 You can tell she’s in charge because the hat.

Another bit of this film that made me absolutely peachy with pride was the fact that even though the film is set in 1926, the highest authority in the American magical community is Seraphina Picquery, a Black woman. I’ve practically winded myself in the past insisting to anyone who will listen that when building alternate fantasy or sci-fi worlds, we don’t need to be constrained by the problematic prejudicial aspects of the real world, and finally there’s at least one movie that seems to have gotten the hang of that. In Fantastic Beasts the American wizarding world seems to keep itself even more isolated than the British wizarding world, not allowing wizard-Muggle marriages or close relationships for the sake of secrecy. While this is indisputably its own type of prejudice, it does seem to keep the wizarding community insulated from Muggle racism and sexism. We don’t know exactly how attitudes ended up differing so drastically amongst wizards, but at least we got to see one woman of color in a position of authority, and hopefully the historical worldbuilding behind a magical USA is something the other movies will delve into. Unfortunately, there isn’t a great deal of representation throughout the rest of the movie; the extras are almost exclusively white in an era when New York was every bit as diverse as it is today.

Hey, it’s that same spooky guy from all that other spooky stuff.

There were only two aspects of the movie that bothered me: first, I thought that Johnny Depp was a poor casting choice for Grindelwald. I can’t say he’s not a good actor, but when Grindelwald’s “Mr. Graves” disguise came off, it was as though I was suddenly looking at Every Tim Burton Character Ever. He had a slightly absurd haircut, a weird mustache, pale skin and sunken mismatched eyes, and only said one line. Usually I would try not to judge an actor by their previous work, but the man has chosen to be in eight Tim Burton movies since 1990, playing very similar characters in each one; I feel like he’s carved his own swirly, weird headstone.

The second thing I wasn’t a big fan of was the “obscurus” concept. In Fantastic Beasts, Newt explained that if a child is forced to repress their magical abilities, they will generate a vengeful blob of energy called an obscurus that will destroy stuff around them and usually kill them by about age ten. If that’s the case, it seems like a huge oversight that Hogwarts makes no attempt to contact magical children until they’re eleven, especially Muggle-born children. It also seems likely that, given the circumstances Harry was under, the odds of him developing an angry murder blob himself were distressingly high, and surely Dumbledore or someone would have realized that and perhaps not placed him with people who made him live in a closet. Even if it’s a rare occurrence (and how often it happens is very much disputed in the movie), it’s such a dangerous possibility that there ought to have been some fail safes put in place by the wizarding community to try to ensure that it doesn’t happen ever.

That aside, Fantastic Beasts and Where to Find Them was wonderful to watch. It was visually stunning, not only because of the beautiful CGI but because of the genre elements and costuming choices that were used. The characters were interesting and the setting was very unique, and most of all, it still gave me that warm, fuzzy Harry Potter feeling I had been hoping for. While I am not a fan of this series’s Grindelwald and I suspect that the five films they evidently intend to make will feature him heavily, I’ll eagerly go see the sequel as long as there’s plenty of Newt in it.

11 thoughts on “Pan Reviews: Fantastic Beasts and Where to Find Them”