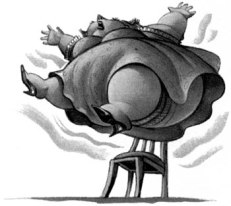 via the HP Lexicon

While I did enjoy it, there’s still quite a lot to critique about the newest entry in the Harry Potter series, Fantastic Beasts and Where to Find Them. From Queenie’s casually nonconsensual Legilimency to the general lack of people of color, at least I know that I won’t lack for post topics for a while.

One of the more egregious issues in the original series was J.K. Rowling’s ongoing conflation of fatness with badness. While Fantastic Beasts takes a small step in the right direction by making its fat character a good guy, his portrayal is still far less than ideal. Spoilers for the movie after the jump.

Throughout the original seven books, the only people we see who are described as fat (as opposed to pleasantly plump like Molly Weasley, the Hogwarts Express food trolley witch, or Pomona Sprout) are bad people. From Dolores Umbridge to Crabbe and Goyle and Slughorn, being bigger tends to correlate to being awful people, or at the very least awfully morally grey. 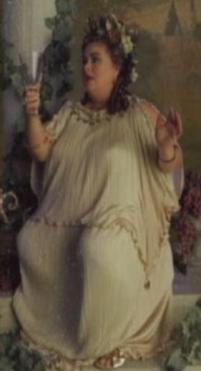 Except the Fat Lady, and, like, that’s her entire character. She’s fat. (via popclassicsjg)

Going back to the very beginning of Sorcerer’s Stone, on the first page we’re introduced to Vernon Dursley, “a big, beefy man with hardly any neck”. His son Dudley is first physically described as resembling “a large pink beach ball wearing different-colored bonnets” as a young child, and as an eleven year old was “very fat and hated exercise—unless of course it involved punching somebody…. He had a large pink face, not much neck, small, watery blue eyes, and thick blond hair that lay smoothly on his thick, fat head.” Nearly every mention of Vernon or Dudley is paired with a reminder that they are fat, usually as a descriptor of what they look like when they’re being cruel to Harry.

Later in Sorcerer’s Stone, Hagrid curses Dudley with the intent of turning him into a pig, but only manages to give him a pig’s tail, as “he was so much like a pig anyway there wasn’t much left ter do”. In Goblet of Fire, Dudley is described as having become so fat that his parents could no longer pretend he was just big-boned, and is put on a diet due to his having grown to “roughly the size and weight of a young killer whale”. The conflict at home for the entire beginning of the book is that all of the Dursleys are deeply unhappy about this diet business, and they’re taking it out on Harry.

Vernon’s sister Marge is yet another nasty fat Dursley, whose weight is incontrovertibly tied to her unpleasantness. She’s “large, beefy, and purple-faced [like Uncle Vernon]; she even [has] a mustache, though not as bushy as his.” When she insults Harry’s parents beyond his thirteen-year-old ability to control his anger, his magic overflows and causes her to expand even further into a balloon of herself, floating away as the Dursleys panic beneath her and Harry runs off to hail the Knight Bus.

It’s worth noting that the Dursley family themselves is perfectly fat-positive. They aren’t worried about their weight, and in fact often comment that Harry is the runtish, abnormal one (an assholish remark in context, as it’s the fault of their neglect and abuse that he’s so skinny). Rather, it’s the narrative voice, care of Jo, that ties their fatness to their badness, and then reinforces the correlation by not including any particularly sympathetic fat characters as a counterpoint. 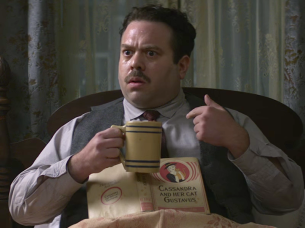 In Fantastic Beasts and Where to Find Them, we finally move away from the correlation between being fat and being a horrible person. However, good-hearted no-maj Jacob Kowalski isn’t particularly revolutionary fat representation.

Kowalski comes into Newt Scamander’s life when he accidentally switches suitcases with him. They’re both heading into a bank—Newt to search for his missing niffler, and Kowalski to get a loan to open up a new business. That business? A bakery, of course, and his briefcase is filled with baked goods. (He’s currently employed at a canning factory, just in case you thought part of his backstory could be un-food-related.) Playing into another stereotype about bigger guys, he’s kind of an idiot. He’s naive enough to believe that a loan officer was going to give him money with no collateral except the taste of his croissants, and seems genuinely baffled by everyday events long before he gets caught up in magical nonsense. This characterization isn’t helped by his status as the only non-magical member of the cast. In a different movie, he’d be there as the audience stand-in, and the magical folks’ explanations of how the wizarding world works would be necessary. In a Potterverse film, it just seems like he’s the only one not in on it—we all know what’s going on already.

When the Goldsteins take Newt and him in, Queenie is quick to comment on his probable appetite, and when she magics an apple strudel into being in front of him, his awe seems to be directed at the food itself rather than the fact that it’s being spelled into being. Later, as Newt schemes to disappear into his suitcase, Jacob is loath to leave his hot cocoa behind; when he finally decides to join Newt in the suitcase, we are subjected to the visual “joke” that he’s too fat to fit into the suitcase. His stomach catches on the lip of the case, and he has to bounce and wiggle in order to squeeze himself through. Meanwhile, enormous creatures like the Erumpment and the Thunderbird (which unlike the Occamy do not have shrinking/expanding abilities) slip inside with no problem.

Finally, of our four heroes, Kowalski’s the only one who isn’t entitled to a happy ending. While this is ostensibly because he’s a no-maj (more on that in a later post, because, wow that’s awful), it’s hard to miss the physical differences between him and his wizarding compatriots. The powerful and beautiful saunter back off into their magical lives, and Kowalski gets Obliviated. While Newt does leave him the financial means to finally open his bakery, and the movie closes on Queenie visiting him there, this still isn’t a fair ending. He’s the only one of them who doesn’t get to keep his character growth over the course of the movie. And while it’s suggested that he and Queenie’s burgeoning romantic relationship will …re-burgeon, it’s no longer a remotely healthy relationship in terms of power dynamics. It was bad enough that Queenie is always reading his mind when he knows it’s happening—it’s extra bad for her to be doing it without him even knowing it’s possible.

For all that Jo appears to espouse progressive views, she really needs to sit back and examine her own prejudices. While she belatedly announced Dumbledore was gay, and belatedly embraced the Black Hermione headcanon by welcoming a Black actress into the role in Harry Potter and the Cursed Child, the actual books are pretty lacking. Her progressive opinions have so far managed to give us a series with no genuine queer representation, minimal racial representation, a comically whitewashed and racist imagining of wizarding America, and a deeply limited idea of what kind of person you can be if you’re not stick-thin. With four more movies to come in the Fantastic Beasts franchise, I wonder if she’ll take any of these criticisms to heart or just dig her heels in as she’s done in the past.

2 thoughts on “From Pig Tails to Fat Ladies: Fatphobia in the Harry Potter Universe”