I have been reading Lumberjanes for a while now. For those unfamiliar with the comic, it follows a group of girls at a camp who keep getting involved in supernatural shenanigans. I love it so much. However, it’s been difficult for me to identify exactly why I love it so, aside from the obvious—the diversity of female characters and celebration of their friendships. But why do I love these characters? What’s so special about the representation of girls in Lumberjanes? I was talking about this with some of our other writers the other night and they helped me realize just how unique this comic is in its portrayal of girls, in how it avoids common misogynistic tropes, and in how it celebrates all the different ways to be a girl.

Some little spoilers for the comic series below.

When you start thinking about it, Lumberjanes is really upfront with its message that there is no wrong way to be a girl and that everyone gets to define what that means to them. Symbolically, it’s reflected in the camp’s title “Miss Qiunzella Thiskwin Penniquiqul Thistle Crumpet’s Camp for Hardcore Lady Types”, which used to say “for Girls”. I would argue that perhaps they could’ve kept the word “girl” in there (as in “Hardcore Girl Types”), but the basic message of inclusiveness still stands—all girl types are welcome here, including people who perhaps don’t consider themselves wholly girls but still identify with girls to a degree. This is further clarified once we meet the elder Lumberjanes, and Barney, a nonbinary person who was a Scouting Lad at the beginning, asks to join the Lumberjanes. The Lumberjane elders explain that it’s up to you to decide whether you belong in the Lumberjanes—that is, whether you’re a (hardcore) lady type—and nobody else has a right to say anything about it. 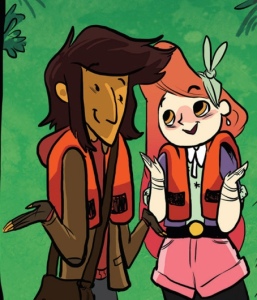 Unfortunately, the epitome of a girl in mainstream society is a dainty cisgender girl who likes boys and dresses. If you don’t fit into any of these norms, your status as a girl is automatically questioned. You get labeled as not girly enough or, worse, not really a girl at all. This is particularly true for transgender girls who are often not recognized as girls. Therefore, I’m very glad that the main cast of Lumberjanes includes a transgender girl of color, Jo, whose right to be at the girl camp is never questioned. Jo is not particularly feminine and is also the analytical mind of the group with an interest in science and engineering, which is normally seen as something that girls don’t/shouldn’t pursue. This sends a lovely message that as long as you identify with girls, you belong with girls, and other things, such as how society perceives you, don’t matter.

Lumberjanes also shows us that no type of girl is better or worse than any other type of girl, and in so doing, avoids the misogynistic “I’m not like other girls” trope. It does this in two simple steps. First, all of the girls possess different interests, character traits, strengths, and weaknesses. Secondly and crucially, it emphasizes friendship and teamwork among girls. When all of your girls are unique and each contributes their interests and strengths to the team, there’s no reason to single one girl out as a “winner” opposed to all the other girls, because they all win as a team of friends. You could say that in addition to identifying as a girl type, Lumberjanes have just one other requirement to belong to the group, and that is to be friends and work as a team with other girls. I mean, their motto is “Friendship to the MAX”, after all. 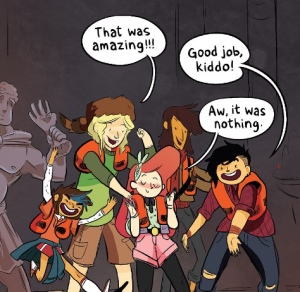 Finally, I just want to talk briefly about the art in Lumberjanes, which also contributes to the messages of inclusiveness of and respect for all types of girls. The girls all actually look different, which is refreshing in a world where creators drawing girls often can’t manage that. Also, they actually look like children/teenagers and wear practical clothing. This is not something I thought I’d have to be concerned about when I started getting into comics, but one of the first comics I read was Runaways and I was unpleasantly surprised at how often the teenage girls were drawn in overly sexualized ways.

Lumberjanes shows us that nobody but you can decide whether you belong with hardcore girl types and that nobody else has a right to question your decision. It also avoids falling into the trap of the narrow societal understanding of what it means to be a girl by including transgender and nonbinary characters with different interests and traits. And, perhaps most importantly, it shows that a girl doesn’t need to put herself in opposition to other girls and that friendship and teamwork is the way for all girls to win.

2 thoughts on “Sexualized Saturdays: What It Means to Be a Girl in Lumberjanes”