So I’m not gonna lie, I absolutely loved Fantastic Beasts and Where to Find Them, but I was probably more critical of this movie than most other movies I’ve seen recently. I tend to hold the Harry Potter franchise to a higher standard because I love it so much. In essence, the Harry Potter franchise, like many others, has always been incredibly problematic; I was just too young and privileged to notice this when I first started reading the books. I’m now an adult watching Fantastic Beasts, and there are still aspects in the worldbuilding that we at this blog have criticized before and that others have criticized as well, so it’s a wonder that J.K. Rowling—or even Warner Bros—hasn’t attempted to fix some of these issues yet.

There is plenty to discuss about the recent movie, but today I want to focus on the house elves and how they were a stand-in for the period-era racism that Black people faced (but, you know, there were very few Black people in the movie). Once again, the Harry Potter franchise finds itself discussing racism without actually discussing racism.

In the Harry Potter series, house elves were basically treated as slaves. They weren’t allowed to wear clothing and worked for wizards for no pay, doing everything from cleaning to cooking and so much more. Furthermore, house elves were not supposed to be seen by the wizards who controlled them and their servitude was so ingrained that house elves like Dobby would punish themselves physically for disobeying their masters. We are constantly told by wizards like Ron, who grew up knowing about such things, that the house elves like this treatment, and only Hermione is truly upset by the fact that Hogwarts and other places were run by slave labor. However, in Fantastic Beasts, we see that the American wizards must have a more progressive stance on house elves, and by progressive I mean that the elves don’t appear to be slaves and are allowed to wear clothes. Maybe this means the house elves are also actually paid for their work, but that is never made particularly clear.

We see house elves holding a variety of jobs in the American magical community. There are two at the Magical Congress of the United States of America (MACUSA): one is a wand polisher and another is an elevator bellhop, but we never see any elves in the MACUSA in any sort of higher-up position, implying that, like in the Harry Potter books, the house elves are marginalized. We later witness several house elves again: in the speakeasy The Blind Pig there is one working as a jazz singer, entertaining the customers, and another working as the bartender. At first I thought that the mobster owner of the club was also a house elf, but according to the Harry Potter wiki he’s a goblin named Gnarlak, despite the fact that he doesn’t look like any of the goblins in the previous movies, but whatever. House elves clearly don’t work for just one family, like we see in the Harry Potter books, but they also only work blue-collar jobs. As they don’t appear to be enslaved by one family or another, this must be the result of discrimination against them—Dobby is shown to be powerful enough to blast Lucius Malfoy back several feet, so it’s not like house elves aren’t equally as capable of being Aurors. 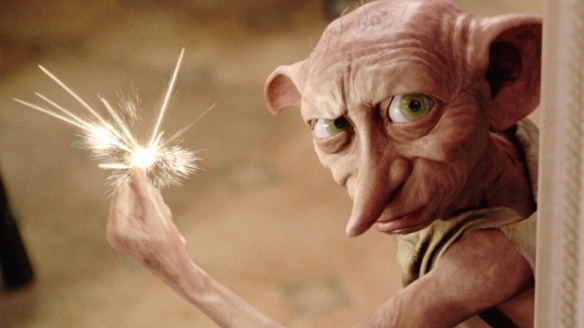 From observing all this, house elves appear to have the same rights as Black people in the No-Maj community in the 1920s, making them basically the magical stand-ins for Black people in the wizarding world. During this time, racism and segregation meant that the vast majority of Black people in the United States were only allowed in certain professions. Mary Ann Watt, with Christopher Zinkowicz and other authors, wrote an article about African-American occupations in the 1900s. In it, they describe the types of jobs Black people often had at the time:

Note that of the occupations listed here, we see similarities with which professions the house elves were given. Bootblacks were men who polished someone’s shoes for them, similar to the elf who polished wands at the MACUSA, and the house elf who manned the elevator would probably fall under the same category as a servant or hotel waiter. While some Black people could obtain what would be considered more professional jobs, they often were limited because white people would not frequent their business. There is also the fact that we see house elves working and performing at the speakeasy The Blind Pig. Jazz and speakeasies went hand in hand in the 1920s and the mobsters who ran them knew that it was cheaper and less risky to hire unknown talent to perform at their clubs, so they often hired Black musicians and singers who played jazz, though their performing at these clubs usually led to them being pretty famous. So house elves seem to be taking on not only the roles but also the culture of Black Americans in the 1920s.

There are many issues here which we have already discussed, the biggest being talking about anti-Black discrimination without Black people actually being present, but there is an even bigger problem here: there is no discussion of discrimination or even any mention of it. We know the house elves must be discriminated against because they were in the modern Harry Potter era, but we also know this because they are engaging in the same roles and culture as Black people in the 1920s. Maybe there is a deleted scene where someone notes their distaste for how the house elves are treated, but that certainly wouldn’t solve the issue. We are meant to see their oppression in the same way Ron or any other pureblood wizard would: as something normal. At the very least you would think Newt would make some mention of how house elves are treated even worse in England. So while house elves fill the same oppressed role as Black people in the wizarding world, we never get any hint of this. This normalizes the discrimination that they are facing. This is something our more heroic characters should be talking about so that it isn’t normalized.

I’m just confused and frustrated. Was Hermione Granger the first person ever to even kind of care about what was happening to house elves? Moreover, this leads to further issues when it comes to how wizards are supposedly more progressive than No-Majs. Are wizards seriously ignorant or sheltered enough that they could applaud themselves for not having race discrimination, but treat house elves exactly—and I mean exactly—the same way No-Majs treated Black people? Add to this the fact that other than Seraphina Picquery, who is given very little characterization, there are no people of color of note in the movie, with only a few as background characters. Fantastic Beasts is getting a whole series of movies and has the chance to do so much with its narrative. First off, the story could actually include people of color. Even if Black witches and wizards have equality, there’s a possibility that some of them have No-Maj relatives that are treated poorly or at least are aware of what it’s like for No-Maj Black people. They would surely recognize the similar prejudices against magical creatures like house elves. Maybe Seraphina is attempting to push through some sort of house elf equality act. Then there is our main character, Newt. According to the Harry Potter wiki, Newt spent two years working in the Department for House Elf Relocation. Did he like working there? Did he feel for the poor house elves and maybe other discriminated-against magical beings? There is so much that could be looked at here, and if JKR and the other powers that be took the time, they could certainly fix some of these issues.

4 thoughts on “House Elves & Racism or Discussing Racism, but Not Really”