A few weeks ago I was pretty bored and so I decided it was time to listen to a new podcast. For the most part, I have almost exclusively listened to Night Vale Presents podcasts so far, so I felt it was time to branch out. I looked up several of the current most popular fictional podcasts and became interested in one called The Black Tapes. I tend to shy away from horror, but our former author Fiyero has been introducing me to more horror as of late; I found myself hooked on the show and listened to the entire first season in one night.

Spoilers for The Black Tapes podcast below.

The Black Tapes is about a woman named Alex Reagan who used to work for an NPR-esque radio show called Pacific Northwest Podcasts. After leaving that show, she and her producer Nick began working on a new project where she interviews people with interesting lives and professions. In the first episode she meets with ghost hunters and paranormal investigators. However, the podcast derails when she meets Dr. Richard Strand, an evangelical atheist and proud skeptic who spends his life researching the paranormal with the express purpose of disproving it. Strand’s office is filled with white VHS cassette tape cases that are used to store information about cases that he has disproved. During the interview Alex notices some black cassette tape cases in another room and eventually, Strand reveals that these are the cases that he hasn’t been able to disprove—he would add “yet”—for whatever reason. Strand shows Alex the information in one of the first tapes and they begin to investigate further, leading the podcast away from its original purpose and solely into investigating both the black tapes and Strand himself, who seems to also have something of a mystery surrounding him.

The podcast is definitely firmly a horror podcast. It is not Night Vale-esque horror, which is somewhat creepy but also somewhat humorous; this podcast will definitely put you on edge and have you jumping at shadows. However, thanks to Strand’s presence, there is also a healthy air of skepticism. If you’re not prone to flights of fancy, you could potentially dismiss a lot of the supernatural happenings in the podcast, but it never loses that horror element even then. Alex is a well-rounded female character who is personable, but also professional, and very dedicated to getting to the heart of the stories and people she covers. Strand is also a compelling character; despite being the somewhat stereotypical brooding stoic male figure, there are a lot of layers to his character and as the show progresses it is revealed that Strand is very passionate about his work and the people he cares for. One of the things I love most about this podcast is the relationship between Strand and Alex. The two are excellent foils for each other: Alex tends to be more open-minded and likable, whereas Strand is more cagey and is, despite his fame and intelligence, pretty terrible with people. What they both have in common, however, is their relentless pursuit of the truth, which sometimes leads them both to make rash decisions. Their differences and similarities make them a great team and cause some unique conflicts between them. The two biggest conflicts are Alex’s research into Strand himself and Strand’s annoyance at Alex for more easily accepting the possibility of the supernatural. 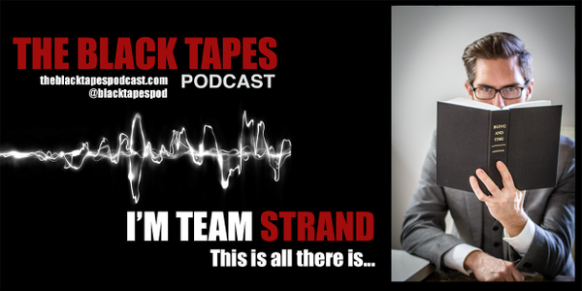 Strand, Alex discovers, has a lot of secrets of his own. First off, his wife went missing and he disappeared for five days after. Strand reveals that he was searching for his wife because he didn’t believe that the police could find her. This plays a huge role in the story; Alex wants to believe Strand, but as information about his wife comes up, Strand becomes resistant to her inquiries. Finally Strand reveals his wife is alive and asks Alex to help him find her. For those of you worried that this is just yet another male backstory where a woman gets fridged, I will spoil some things and say that Strand’s wife does show up near the end of Season 2 with her own shocking backstory. Strand also has a strained relationship with his daughter and a mysterious childhood that I won’t reveal here because it is too good to spoil.

As the podcast progresses, the black tapes that he and Alex are investigating seem to be more connected to Strand personally than either originally thought. Alex also becomes affected by the investigation. She starts to develop insomnia and consistently receives strange calls from a man named Simon Reese who is in one of Strand’s black tapes. Simon killed his own parents as a child and has been locked in a psychiatric institute since. Despite their issues and the drama they are involved in, Strand and Alex eventually develop a friendship and help and support each other as best they can, though their personalities often clash. I also love that these two characters are just friends and colleagues, which is rare for a male/female duo—though I admit that I do ship them quite a bit. But I’m known for shipping things that will never happen so… whatever. 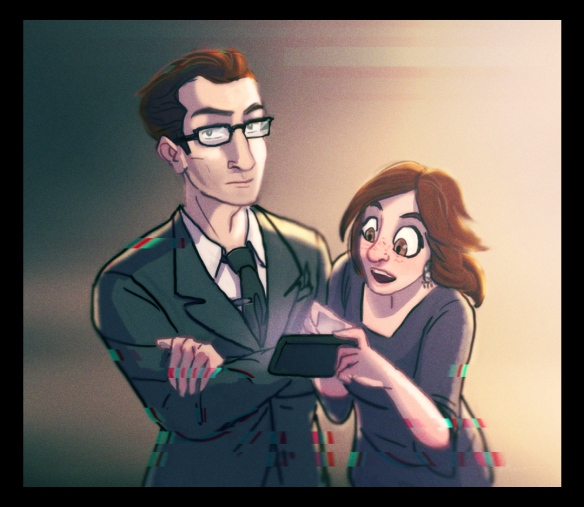 The other thing I enjoy about this podcast is the lack of faith the characters have. Now, that might seem weird coming from a person who has dedicated her life to studying religion, but a significant portion of people these days are atheist or agnostic, and they are almost never represented in media in a respectful manner. As stated earlier, Strand is a hardcore atheist who greatly dislikes religion and even mentions in the podcast that he believes that if there was no religion and people put that passion into science, we might have already had cures for cancer or solved a lot of the world’s other problems. He seems to dislike religious people in general, viewing them as delusional, and is even somewhat hostile towards them, though he does seem to be able to keep a modicum of politeness around people who are religious. He also has studied religion and folklore, and while he did so largely to disprove some of the cases he researches, he still has a thorough understanding of religion.

Alex, for her part, was raised somewhat religious, but like most people, her upbringing wasn’t strict about religion and she currently views herself more as an agnostic if pressed about her views. Unlike Strand, she hasn’t thought seriously about what she believes about religion and the afterlife, but does seem to lean more toward the idea that it isn’t real. However, her experience growing up religious tends to make her nervous when the subject of demons is brought up and she’s somewhat more willing to believe that something mystical could be happening. I like this specifically because it shows a diversity of belief when it comes to those who don’t believe in God or anything supernatural. Both Strand and Alex lack any kind of religious faith but both respond to that lack of faith differently, as is the case in the real world.

The lack of belief of both these characters is what makes for an interesting story. The main supernatural conflict of the story revolves around demons and demonic cults, and one of the tapes even shows an exorcism that Strand himself filmed. While Catholics can certainly still be skeptics, like Scully from X-Files was, I can say from experience that you are more likely to believe something might be real when you hear about something explicitly from your faith. If Alex was a person of faith, then it would just become the classic religion versus science argument between Alex and Strand, which would be less interesting because we’ve seen it so many times already. It also creates an entertaining dynamic for the story. The podcast puts you more in Alex’s shoes than in Strand’s, and the more she learns from investigating the black tapes, the more concerned she becomes that some of these supernatural things might be real. Even her producer Nick and her other friends and colleagues begin to worry about her and constantly remind her that none of these demons and satanic rituals are actually real. It’s a very different narrative than what we usually get. Usually characters are encouraged to have faith and fight against their doubts, but here Alex is encouraged to be skeptical and not believe in the things happening around her.

I’m not certain where the writers of the show will take the podcast; however, the more evidence that piles up from the black tapes, the more you start to feel like there is a real supernatural threat and that Alex and Strand’s lack of belief will be their downfall. I hope that isn’t the case, but Alex seems to be struggling more and more with remaining skeptical, whereas Strand, despite his experience, remains firmly skeptical that any of these events are real. I really feel that the best thing for this podcast would be to keep things ambiguous or reveal that Strand was right and there was never actually anything supernatural happening. I think if the podcast were to end with clear evidence that ghosts and demons were real, it would just be boring. The uncertainty of whether something is real or all in your head is what makes this podcast so spooky, and I don’t want it to lose that vibe.

Overall, this is a great podcast with interesting characters and a great, scary story that I would highly recommend everyone listen to. I’m the biggest chicken ever and even I can listen to this podcast, so please give it a try. But I will warn you if you are more prone to believing in impossibly tall ghostly dark figures following you everywhere, creatures with upside-down faces, demonic possession, and bi-locating murderers, then you may want to listen to this podcast in the daytime and maybe with a friend. Meanwhile, I will be reading fanfic and anxiously waiting for Season 3 of The Black Tapes to finally come out.