I enjoyed 2016’s Fantastic Beasts and Where to Find Them movie, though like Lady Geek Girl, I felt it had a lot of logical issues and problems with racial representation. The film didn’t have much in the way of religious or LGBTQ+ representation either… but it did have metaphors for them. Which—do we even have to say it anymore?—is not enough.

We’ve called out the Harry Potter series before for using magic and various conditions in the wizarding world as a metaphor for different kinds of oppression in the real world, such as lycanthropy as a metaphor for AIDs and discrimination against non-purebloods as a metaphor for racism. The problem with these metaphors is that readers might not make the connection to the real-world problem, so in order for them to really have impact, there should be examples of the real-world issue too. For instance, the series could have featured more prominent characters of color who experienced racism in the Muggle world in addition to discussions of blood “purity”. Instead we got a cast of all white protagonists, with characters of color getting very little development.

J. K. Rowling makes no secret of her support for social justice causes (just look at her Twitter feed!). In fact, she’s totally fine with headcanoning Hermione as Black and applauded the casting of Noma Dumezweni, a Black woman, as Hermione in the Cursed Child play, and racebending Hermione helps to relieve some issues about her Muggleborn blood status acting as a stand-in for discrimination rather than discussing any real-life discrimination. But real-life discrimination is still not discussed in canon. You would think that maybe Rowling would have listened graciously to some of these criticisms about hiding real-world issues behind metaphors that not everyone is going to get, and would have worked harder to avoid them in her next work. What is that next work? Fantastic Beasts. Did she listen? Nope. Instead the movie gave us a new metaphor to grapple with: obscurials as coded LGBTQ+ children repressed by overzealous religious families, in this case represented by the Second Salemers. And it isn’t pretty.

Spoilers for many aspects of Fantastic Beasts below the jump! 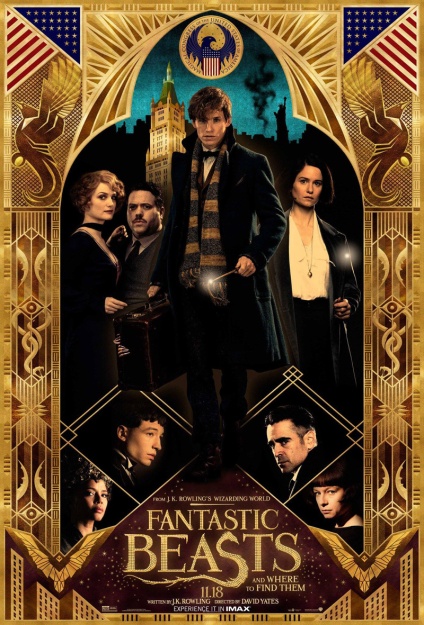 In Fantastic Beasts, the Second Salem Philanthropic Society is a group of No-Majs dedicated to wiping out all of wizardkind. They are portrayed as living in a church (though it’s never used as such), performing charitable activities like feeding hungry children (but not until the children take propaganda pamphlets), and passing out said pamphlets on the streets to evangelize No-Majs on the threat of witches. The parallel to the zealously religious Puritans who perpetrated the Salem witch trials is obvious, right down to the names Mary Lou Barebone, the leader of the group, gives to her adopted children: Modesty, Chastity, and Credence. Though there is never any mention of God in the movie, all of this paints the Second Salemers in a religious light. They’re meant to evoke in us images of stuffy Puritans, Christian missionaries refusing help to needy “natives” unless they convert (i.e., the children who must take pamphlets before they can eat), and pushy Christians who evangelize door-to-door or on the streets with pamphlets about “Are you Saved?” and Chick tracts. Even their hatred of magic could be tied to historical—and current (speaking of Chick tracts)—Christian belief that magic is a product of the devil.

So is this authentic religious representation? Hardly! There is never any mention of the Second Salemers doing their work in the name of God, nor of their belief that witches are of the devil. Their church could just as easily be mistaken for a lofty building because we never see them use it for religious services. And I know why they kept the religious undertones ambiguous: I, and many other Christians watching this movie, would have been furious if the Second Salemers had been given an explicitly religious motive. It would have set up the only religious characters in the movie—in fact, in the entire Harry Potter universe—as the villains, which might have even helped to validate the objections of those Christians who believe Harry Potter is evil. The situation could have been alleviated if we had been given a counterexample of an explicitly religious character who did not have all these irrational genocidal beliefs against wizards. But we didn’t get that. Instead everything is left on the subtextual level for the sake of “metaphor”, but if you look deep enough, the anti-religious message comes through anyway.

On the other hand, I also feel kind of okay with the Second Salemers’ depiction (but still not okay that we had no religious counterexample) because they’re clearly supposed to represent an extreme form of religiosity. In fact, their picketing of the senator’s speech could remind you of the Westboro Baptist Church’s picketing of events like soldiers’ funerals. Even Westboro’s infamous “God hates f*gs” slogan and their general hatred for LGBTQ+ folks becomes relevant when you take into account the metaphor of obscurials.

Obscurials are magical children who are taught to hate and fear their burgeoning magical gift, and so repress it until they can’t hold it in anymore. Then, usually when the obscurial is emotionally compromised, it manifests as a black cloud of destruction called an obscurus, which sometimes directly attacks the people who hurt the obscurial child. In Fantastic Beasts, it turns out that Mary Lou Barebone’s adopted son Credence is an obscurial. Throughout the movie, we watch his suffering and abuse at her hands as she beats him for the slightest infraction, never shows him trust, and in the end, despite raising him, rejects the label “mother”. Her hatred toward him seems to imply that she knew he came from magical heritage all along, abhorred him for simply being a wizard, and was trying to beat it out of him. Now, what does that sound like? It’s true that throughout history, certain Christians have raised children to hate and reject things about themselves, whether it was as simple as left-handedness or as complex as their entire heritage for American Indians in residential schools. But currently, a major hot-button issue that some Christian groups hate and reject their children for displaying is queerness. And which church is most famous for its vehement anti-LGBTQ+ sentiments? The Westboro Baptist Church. 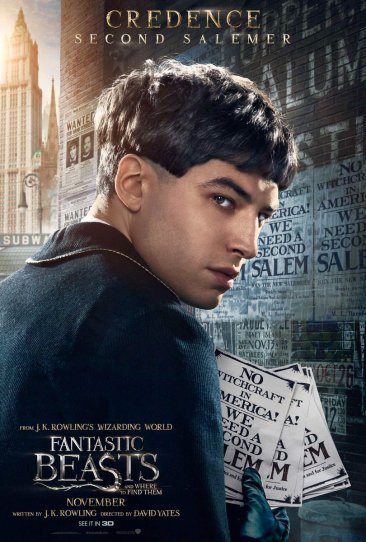 In case you couldn’t tell, I’m a proud member of the Credence Barebone Preservation Society.

Like being queer or transgender, magic is something Credence was born with and can’t help but have. There is nothing inherently wrong with it, and yet his adopted mother hates it and thinks it’s evil from the start. She drills this into her children’s heads from birth, so that when Credence starts noticing magic within himself, he is afraid and represses it, just like queer children from bigoted families repress their own queerness out of internalized fear and self-hatred. Mary Lou Barebone tries to beat the magic out of the children she adopts from wizarding families, just like the harmful and discredited “conversion therapy” that attempts to “convert” queer kids to straightness or cis-ness. She eventually rejects Credence as a member of her family entirely, just like some extremist families disown their queer children. Mary Lou Barebone is rightly presented as the villain for the abuse she inflicts on Credence, and the narrative punishes her. So, could this be read as a win for LGBTQ+ rights?

Not so fast. The problem is where the metaphor between the obscurus and queerness breaks down. Unlike obscurials, queer kids raised in repressive households do not become terrifying monsters that kill people. In fact, instead, they are at much higher risk for self-harm through things like drug abuse and suicide (which could be metaphorically reflected in the movie by the tendency for obscurial children to die before the age of 10). This is the same problem that Ace points out in her post on the Fellowship of the Sun church from True Blood. If vampires really are monsters that hurt and kill people, aren’t the religious zealots opposed to them right to oppose them? If magic can cause something as dangerous and murderous as an obscurus, aren’t the Second Salemers right to try to stamp it out? And if we read into the metaphor for queerness, doesn’t this depict repressed queer people as dangerous too? That queer people are a danger to society is already a pernicious enough stereotype; we don’t need this movie feeding into it too.

Pictured: NOT what repressed queer kids do

So, yet again, J. K. Rowling has given us a metaphor for an oppressed group, and this time, it’s a particularly bad metaphor. And, once again, it’s a metaphor with no real representation of said oppressed group. All the canonical romance in the movie is heterosexual. Credence doesn’t get a love interest (or, really, let’s be honest here, much development whatsoever), so we don’t know if he’s queer or not—though his interactions with Grindelwald-as-Graves seemed to be coded as creepily sensual, which is problematic because of the age gap, power differential, and, you know, the whole literal wizard Hitler thing. But I would argue that, in order to avoid her previous trap of “magical metaphor without any true representation”, Credence needs to be shown to be some flavor of queer in future installments of this series, and he needs to be saved from his obscurus so (metaphorical) gay people are no longer viewed as a threat. (Also, don’t worry; it’s been confirmed that Credence isn’t dead and will be playing a role in the sequels!)

Now, Rowling has promised us that Dumbledore will be in future Fantastic Beasts movies and will be explicitly gay, which he wasn’t in the Harry Potter books. So there will be some representation. But even if we get an epic romance in which Grindelwald is ultimately redeemed by the power of love, Dumbledore and Grindelwald’s story still ultimately ends in tragedy, which the queer community hardly needs more of. In addition, I have seen some members of my own Christian tradition justifying the Church’s belief that “being gay is okay, but having gay sex or relationships is not” by pointing to Dumbledore as a role model, who “messed up” in his youth but “repented” and remained celibate thereafter. In order to combat this attitude, as well as the general anti-LGBTQ+ attitude in some religious circles, it’s important for the series to have an additional example of a happy queer relationship. And I think that Credence, the metaphorical representative of a real-world oppressed group, needs to actually belong to that real-world oppressed group in order for the message to be sound.

Wow! Three whole queer people (I’m counting Grindelwald in there) in a single movie? It’s a lot to hope for, I know. But I don’t have much hope for authentic religious representation, so at least I can hold out hope that a healed Credence, now accepting of his magic, will become a genuine, rather than just a metaphorical, representative to queer children hurting from religious bigotry everywhere. And since characters who are both religious and queer are sorely lacking in genre fiction, it would be even better if it turns out that the series actually makes explicit reference to God and the religious background of the Second Salemers by having Credence realize that God loves him, his magic, and his queerness!

8 thoughts on “Oh, My Pop Culture Westboro: Fantastic Beasts and Magic as Metaphor Instead of Genuine Representation… Again”