A few years ago I went through an old movie phase where I watched a bunch of classic movies like Casablanca, Some Like It Hot, and so on. I enjoyed some more than others, but I did not expect to find a movie that would became one of my all-time favorites and one of my go-to choices for when I need a comfort movie to watch. And so today, I want to throw way back to 1952 and talk about Singin’ in the Rain, a hilarious musical whose portrayal of Hollywood and the movie business holds up even today.

For those unfamiliar with the plot of this movie, it follows Don Lockwood and Cosmo Brown—an actor and a musician, respectively—who work in Hollywood making silent movies just as the technology of “talking pictures” comes out. They meet Kathy Selden, an aspiring actress who becomes Don’s love interest. Everyone is facing the challenge of transitioning from the business of silent films into “talking pictures”. It’s particularly difficult for our protagonists, because Don’s co-star Lina Lamont is just really not that good at acting with her voice. 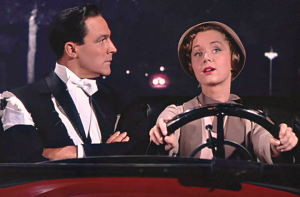 This movie pokes fun at the movie business in Hollywood and celebrity culture, as well as showing how ridiculous some of it is. It shows that during the 20s, people already had a sort of entitlement towards celebrities’ personal lives and even their bodies. People scream for actors at movie premieres and a group of fans straight-up attack Don to get a piece of his clothes. The latter scene is actually quite unsettling, even though later on Don mostly brushes it off, jokingly calling it the price one has to pay for being famous. Kathy is the only one to seriously remark that what those fans did to Don was horrible. Despite that, I liked seeing that people were just as obsessed with celebrities back when the movies were still silent. It also makes this movie still surprisingly relatable and hilarious because of it even now.

My favorite thing about the movie are the main characters. They’re perhaps a little stereotypical: the suave all-American heartthrob, the one girl who doesn’t immediately fall for his charm, and the comedic best friend who’s always around. However, there are touches to their characters that elevate them from the stereotypes. Don gets involved in comedic shenanigans and mishaps as much as Cosmo (see the whole sequence in Kathy’s car when they first meet). Cosmo, in his own right, is a bit of a philosopher and, really, the creative mind of the duo. He comes up with a plan to save Don’s first talking picture, and the “Make Them Laugh” number shows that he knows what he’s doing when he takes on the role of the comedic relief. Kathy puts up a rather snobbish exterior at first to belittle Don’s status as a movie actor. It’s a bit hypocritical since her own career isn’t going well at all, but this action actually makes her character more enjoyable and more real to me.

This relationship is quite heavy on polyamorous subtext, which is not as good as actual representation, but still fun!

The relationships between Don, Cosmo, and Kathy are very adorable, and I can’t help but root for them from the bottom of my heart. Don and Cosmo’s relationship is especially sweet: they have been friends since childhood; any story Don tells involves Cosmo (even his made-up backstory), and Don trusts that Cosmo will tell him the truth, even when it’s not nice. Kathy, as Don’s love interest, changes that dynamic a bit, but not as much as one would think—it’s more like she joins in to Don and Cosmo’s friendship and they become a trio.

The only aspect of this movie that makes me bristle a bit is the characterization of Lina Lamont, who is essentially the antagonist of the story. In the beginning, she’s presented as the vain superstar who can’t really act, believes rumors about herself, and doesn’t understand why nobody lets her speak in front of audiences. The reason for that is actually her strong lower-class accent, which doesn’t match her upper-class appearance. I always eye such hyperfeminine villains with suspicion, because I’m really tired of the trope of evil women who, so to speak, own their beauty and sexuality, juxtaposing them against demure protagonists who still manage to be feminine but seemingly without putting any effort into it. The only thing that saves Lina’s character from becoming a total caricature is the fact that she does turn out to be smarter than anyone expected, given her apparent cluelessness, even though she still can’t outsmart the protagonists.

Finally, I would be remiss if I didn’t at least touch on all the great song and dance numbers, not to mention great physical comedy and comedic timing from everyone involved. My favorite sequences include the already-mentioned “Make Them Laugh” and Don and Kathy’s first meeting, as well as “Moses Supposes” and pretty much all the one-liners out of Cosmo’s mouth, like “Lina, you’ve never looked lovelier” after she just got a pie thrown at her face.

Singin’ in the Rain is still a great movie, all these years later. It shows that we, as people, don’t change that much at all, at least where celebrity culture is concerned. It’s both hilarious and perhaps a little worrying, especially when you think about the scene where Don gets his clothes ripped apart by fans. Nevertheless, I just can’t help but root for Don, Cosmo, and Kathy, who, as characters, are quite archetypal but elevated from being stereotypical by finishing character touches and their relationships. Ultimately, Singin’ in the Rain succeeds at what I look for in it—a break with some easy laughs, impressive musical numbers, and a simple, funny story.

2 thoughts on “Throwback Thursdays: Singin’ in the Rain”