Before I get to those examples though, I think it is useful to know what happens when characters don’t show vulnerability. They become hard to connect with or understand their motivations. I remember watching Kill la Kill and really enjoying the character interactions and overall wackiness in tone. Despite loving the show, though, I couldn’t really understand Ryuko’s motivations throughout the series. She was seeking revenge for her father’s death, but I couldn’t understand why she was so determined or why she had a problem controlling her temper. We at least get backstories for the initial enemies, and how they came to be part of their team, but we don’t get any explanation for why Ryuko is the way she is. She was fairly closed off, so it was difficult to connect to her as a character. 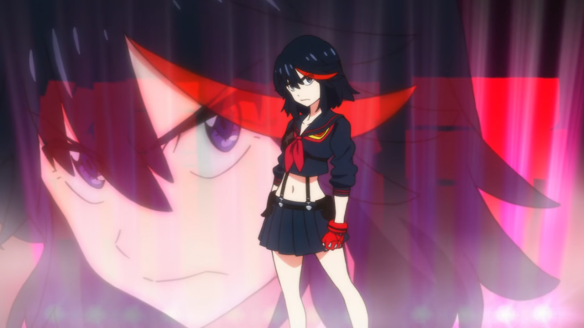 This is all you get.

On the flip side, some stories use emotional vulnerability to great effect. The first I want to mention is Steven Universe. This show already speaks to the idea of togetherness, a softer style of masculinity, and friendship, but I think the narrative really excels when characters are willing to admit their faults or weaknesses. Steven, for example, openly discusses how he feels he can’t live up to what people expect him to be. Pearl admits that she thinks she can never rise above the servant class she was built to be. While these conflicts are obvious to the viewer and other characters, it’s their admission that gives them power. “Admitting is the first step” is a clichéd line, but it’s true. Further, the relationship between Steven and Pearl really shows emotional vulnerability. The viewers slowly begin to see that Pearl had deep feelings for Rose, and has some baggage towards Steven because of it. Once Pearl finds out that she wasn’t privy to all of Rose’s secrets, she runs away and Steven puts himself in danger to find her. This culminates in a really quiet moment of Steven comforting her, despite his not being able to fill the void that his mom used to. The characters being open with each other provides backstory and also contextualizes why Pearl takes some of the actions she does. It’s strong character building and strengthens the narrative. 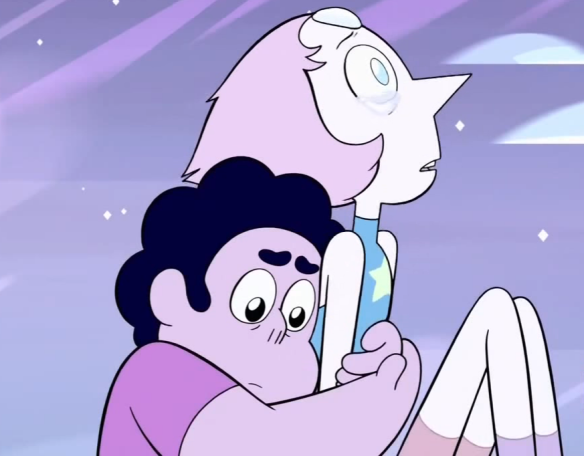 This is a quiet moment, but it says a lot.

Another time I saw vulnerability used to particularly good effect was at the end of Undertale. (Major spoilers ahead.) During the course of the story, provided you don’t decide to kill everyone, you are stalked by Flowey the Flower. Before the final act, he absorbs a significant amount of power and breaks the game and universe to torment you, but is ultimately defeated. Then he tries again, with better success as the final boss. With more power than last time, he is able to assume his true form as Asriel (a character you thought to be long dead), before you defeat him with kindness. You basically get your character to sympathize with him until he gives up. While playing, if you pay attention to all of the dialogue and incidental text, you learn that he is the king and queen’s son, and was stuck into a flower mostly by mistake and unfortunate coincidence. He admits to you in the final confrontation and resulting aftermath that he was literally unable to empathize or feel any positive emotions while he was in that form. Further, he admits that his attack was ultimately just to keep you around, because “once you win, you’ll leave”, which is both a story beat and meta commentary on video games. This moment of vulnerability puts a spin on the entire story, as until now, Flowey was the only fully irredeemable character. He was always a jerk, and only wanted to hurt people for fun, rather than for any positive outcome such as escaping the Underground. While you’re not expected to forgive his actions, most players tend to feel bad for a character who pretty much lost his entire being and is hurting people he loves. Again, vulnerability makes the character and story more relatable and drives home the narrative that decisions aren’t always as easy as good versus evil.

In context, one of the saddest dialog boxes I’ve ever read.

The last example I want to bring up is a bit of a simpler one. When Overwatch was building buzz up to and surrounding its release, the creative team released an animated short following Tracer trying to thwart an assassination on a political icon by Widowmaker. The death would result in further division between humans and Omnics (the robot race in Overwatch), or at least was intended to. Tracer ultimately fails in stopping the assassination or apprehending Widowmaker. The moment of vulnerability that I think a lot of fans latched onto was when Tracer talked to her and asked “Why? Why would you do this?” in response to the murder. Her delivery and animation show real pain and hurt that someone would commit such an act. It shows that she still has hope in people, despite knowing from previous experience that Widowmaker is willing to hurt others without hesitation. We always see Tracer in game or other material to be cheery or fairly unshakable. But here, we see that she can be upset, which takes her (and by extension each character in the game) from being a quick video game archetype (the cheery one, the moody one, etc) to being a fully fleshed-out character.

Overall, it is this vulnerability that each of the mentioned properties shows in their characters that makes each story feel sincere and resonate with fans. Although these worlds are extremely fictional, the characters still feel real. They feel plausible and don’t break our suspension of disbelief. While impossible characters and worlds are certainly fun, sincere stories tend to have more of an emotional resonance with fans. I don’t think it is a coincidence that all three of these examples have spawned passionate fanbases. Although the size of the fanbase isn’t the main goal here; I think it is important for our media to resonate emotionally with people when we use it an escape.