In the absence of regular Steven Universe episodes, I decided to venture into the wide, wide world of its fanworks to fill the gem-shaped emptiness inside me. However, while I do love and support the canonical pairings in the show, I’m not super married to actively shipping anyone, and so I decided to see what I could find in the more gen fic space instead.

I was delighted to stumble upon this particular fic, which examines the sometimes contentious but ultimately loving relationship between Connie and her mother.

(via the Spanish SU Wiki)

Your shirt’s spaghetti straps are Not Maheswaran Approved, so your mother sent you off to Steven’s with a light shrug over your shoulders. You meant to wear it, but Steven wanted to eat lunch on top of the hill, and there’s no shade and it’s a very sunny spring day. So, well, since nobody is around but Steven, who you trust, and the spaghetti straps aren’t that scandalous, you take it off for a while. Just a little while, you promise. Your mom’s not even there, but the part of your brain that feels like guilt is shaped like her, so you promise to it in your head.

After you’ve eaten lunch, Steven stuffs all the vegetable containers (you), chip bags (him) and sandwich wrappers (both of you) into the basket. He presses a juice box into your hand. “Let’s watch the clouds,” he says, so you both lie on the blanket. He asked Pearl once about cloud shapes, and he paraphrases the deeply complex nature of cloud analysis and classifications— “So that’s why you gotta just have fun and not worry about any of that,” he concludes— but you’re making your decision. If you inch all the way onto the blanket, it’ll put your bare shoulder in direct contact with his shirted one. If you maintain a respectable distance, half your body is lying on the prickly grass. You consult for half a moment with the mom-shaped guilt patch in your brain. It doesn’t react quickly enough to stop you.

The blanket feels better than the grass. When your left shoulder gingerly pokes his right, he doesn’t notice.

You smile. He’s oblivious in just the right ways, enough to be contagious. With him, it’s easy to pretend you aren’t choked with fear around people. It’s easy to forget that you’re expected to be mature but still treated like a child. He doesn’t just make you happy; he makes you want to be happy.

Mama Maheswaran is a complex character, because while she is kind of overbearing and overprotective by any metric of parenting, neither is she a bad person. She worries about Connie for any number of reasons, but especially because of her involvement with the Gems—and let’s face it, worrying about your daughter getting involved in intergalactic war is a fair concern, even if her other worries are less grandiose. Maheswaran Approved examines Connie’s sometimes-fraught relationship with her mother from Connie’s POV, with Connie constantly on-edge about doing things that she fears her mother won’t approve of. Whether this is something as huge as battle training or something as small as rolling down a hill with her friend, she worries that no matter what she does, things she wants to do and things her mother has approved of her doing are mutually exclusive. However, in the end, she discovers that her mother is not necessarily the rule-worshipping harridan she’s come to characterize her as. 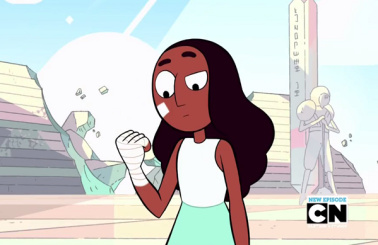 Like, as a parent, this would be vaguely concerning. (via blackgirlnerds)

I loved two things in particular about this fic. First of all, I loved the conflict exemplified in the last lines of the excerpt above. While my mother was never anywhere close to as overbearing as Connie’s, the feeling of being a bright, bookish nerd who was expected to act grown-up but not treated like a grown-up is highly relatable and feels so realistic for Connie. At the same time, as an adult-ish person, you can see her mother honestly just wants the best for her child. The other thing I loved was that, while Steven does feature in the fic, the primary relationship and conflict is centered around Connie and her mom. While no show can claim a surfeit of moms quite like Steven Universe can, we only rarely get moments of characterization for this particular relationship, and they’re always welcome.

Maheswaran Approved is a fast read at just over 1,300 words, and I highly recommend fans of Steven Universe check it out. It certainly won’t keep you busy until the show returns, but it will give you some warm fuzzies in the meantime. Read it here at the AO3!