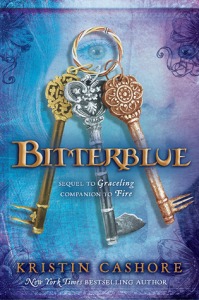 The major point of fantasy novels is, of course, showing a world that is different from ours, where magic is alive and where people have amazing powers. Despite the fact that I read them to escape my mundane life, I’m often annoyed when fantasy books include people experiencing real-life issues, such as trauma, and then gloss over said issues instead of addressing and dealing with them. Other big offenders are the lack of inclusion of LGBTQ+ people and examination of mental illness. Authors and readers seem to think that you cannot address such topics because you cannot use modern-day vocabulary in a fantasy setting. However, once in a while I find a fantasy series which doesn’t shy away from using its medium to examine issues we deal with in real life. As such, today I want to talk about the Graceling trilogy by Kristin Cashore, and in particular its final book—Bitterblue.

Spoilers for the Graceling trilogy below. Also, content warnings for abuse, mental illness, PTSD, and rape.

To give you a bit of an overview of the trilogy, the fantasy hook of the series is that there are people, called Gracelings, who are supernaturally gifted (“graced”) with one ability. This can be literally anything from super strength to mind reading to being able to give people specific dreams. The first book, Graceling, follows Katsa, who works to save a kingdom from Leck, a cruel leader who has a mysterious hold over his people. The second book, Fire, is actually a prequel showing Leck’s childhood and younger years. The third book, Bitterblue, starts several years after the events of Graceling and follows Leck’s daughter Bitterblue, who is now queen of the kingdom and is trying to help it recover from Leck’s reign. It’s proving difficult. Leck was graced with being able to make people accept anything he said as true and real. So, for instance, he could be hurting someone and make them believe they were not feeling any pain or even enjoying it. Bitterblue isn’t graced herself, but she has a number of graceling friends and allies who assist her in her quest. 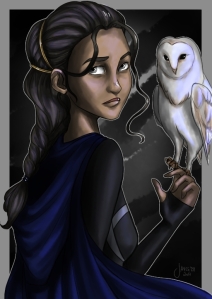 At the forefront of the book is people trying to deal with different kinds of trauma, as Leck hurt many people with physical and mental torture, including rape. (The book isn’t explicit, but it discusses the rape and sexual abuse of children and adults quite frankly, so proceed with caution.) All of Leck’s victims were effectively gaslit because he could make them believe things that weren’t real, warping their sense of reality and causing them to mistrust their own memories. Bitterblue works to try and find out what exactly Leck did and help her people. Throughout the book, Bitterblue is concerned about helping her people heal mentally, which actually culminates in her proposing the idea for a Ministry of Mental Well-Being. I have never before read a fantasy book that dealt so explicitly with trauma and related issues. It doesn’t really use any of the modern vocabulary, but still manages to discuss problems like self-harm and suicide.

The author portrays different ways people try to cope with trauma and shows how some of these ways don’t actually help. For instance, Bitterblue’s advisers, who probably suffered most under Leck, work to erase all memory of what happened by destroying evidence and killing people who may bring it to light. The narrative doesn’t dismiss their trauma or belittle their symptoms of PTSD/depression, such as self-harm and alcoholism. However, their actions to hurt others aren’t excused and they still have to face punishment for their crimes. In contrast, a number of townsfolk start gathering at “story rooms” where they share stories of Leck’s reign in order to try to process and piece together what happened to them, reminiscent of real-life therapy and support groups. Bitterblue, in her search for the truth, is very mindful of people who may be forced to relive painful memories and works to limit their exposure so that they can choose how much they can deal with and heal at their own pace. It’s the latter two approaches that the narrative presents as good ways to deal with trauma. 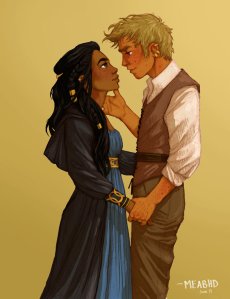 Bitterblue and Saf (fanart by meabhdeloughry)

Although the issue of trauma is the prevalent one, the book also touches on a number of other issues, mostly concerning sexuality and relationships. All three books in the Graceling trilogy, in fact, quite frankly examine female sexuality and relationship dynamics, with focus on the agency of the woman. In many fantasy settings, girls and women have too little say in their romantic relationships. They usually just get pursued by the prince and get married. However, the Graceling trilogy turns the focus on the woman. Katsa, despite being in love with a prince, refuses to get married or have children. On the other hand, Bitterblue falls for one of her male citizens and faces the issue of power imbalance in their relationship. Ultimately, Bitterblue decides that she cannot be in the relationship, despite her feelings, because even though Saf is essentially a good guy, he also committed a number of crimes while trying to help people who suffered under Leck’s reign. Bitterblue feels it would be unfair to try and gloss over Saf’s crimes in the public eye given everything that Leck did.

Also, while exploring romantic and sexual relationships through the eyes of the women, the author remembers to address another critical issue—birth control. It’s only natural that any culture would develop a means to prevent pregnancy, but fantasy novels don’t usually address that. The way it’s presented, it feels more like I imagine birth control in medieval times could have been: both Katsa and Bitterblue are given pregnancy-preventing herbs by older women servants in their lives. It feels like, even though the herbs aren’t difficult to access, this knowledge is something that’s usually passed from mother to daughter, but both Katsa’s and Bitterblue’s mothers are dead. We don’t get many details, but the way both Katsa and Bitterblue find out about it, it feels like this knowledge isn’t very openly shared. So, while the women in Katsa and Bitterblue’s lives aren’t judgmental about it, it feels like the rest of society isn’t so open-minded. While the birth control issue doesn’t completely reflect modern times, that feeling of it being a secret knowledge hits a certain cord with me. 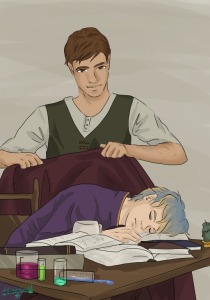 What’s more, Bitterblue seeks insight into her relationship problems by observing and inquiring with a same-gender couple, Bann and Raffin, the latter of whom is a prince of another kingdom. It feels like we should be past such a low bar, but it’s always nice to see the existence of queer people acknowledged in fantasy settings. Bitterblue also shows that there are queer experiences straight people can relate to as well. During the course of Bitterblue we find out that in most of the kingdoms in the Graceling world, same-gender relationships aren’t widely accepted and same-gender marriage isn’t allowed, but there are places where a man can take a husband and a woman a wife. It’s also pointed out that, if he’s crowned king, Raffin would have the power to change the laws and accepted norms of his kingdom. Graceling shows that you don’t need the contemporary vocabulary to include LGBTQ+ characters and issues.

I first picked up Graceling as a random fantasy series available at the library without knowing anything about it, and to be honest, it didn’t become my favorite in terms of world-building and characters I could fall in love with or relate to. However, the series and Bitterblue, in particular, stands out as a rare example that shows that real life issues, such as trauma, sexuality, and relationship dynamics, can be effectively portrayed in a fantasy setting. And I would recommend this series based on this aspect alone.