Rebels’s third season wrapped up just a couple weeks ago, and yet the trailer for Season 4 has already dropped. Sadly, as much as I love this show, this is going to be the last season, which is probably for the best. Season 4 should end right around the time Rogue One starts, and unless something drastic happens to Rebels’s main characters, their absence in the original trilogy will be a pretty big plot hole. After all, at no point in time did anyone go up to Luke and say, “hey, here’s a couple other Jedi you might like to meet.”

The trailer starts with Hera monologuing about the other characters, and immediately, it feels as though she’s talking about them as if they’re dead. I greatly hope that’s not the case—Ahsoka’s still alive, so I want to believe that there’s a way for the Ghost crew to survive as well. I got enough death from Rogue One, thank you very much. But while I’ll probably spend the season dreading potential fates, there are a number of things in the trailer I’m excited for.

Given Hera’s monologue, it looks as though Sabine will be back in the story, and what’s more, so will a few other familiar faces, such as Bo-Katan. We last saw Bo-Katan during The Clone Wars’s fifth season. The sister to Mandalore’s duchess, Bo-Katan was a member of Death Watch, a terrorist organization dedicated to returning Mandalore to its warrior past. She only appeared in a couple episodes, and as a terrorist, she was hardly the most upstanding person in the galaxy, but she was a well-rounded and interesting character. First and foremost, Bo-Katan is loyal to her people and Mandalore’s well being—she even led a revolt against Maul when he briefly took over the planet and helped Obi-Wan.

Initially, I was of the belief that Bo-Katan was Sabine’s mother, until the third season revealed that to not be the case. Nevertheless, Mandalore started to play a bigger role last season, and Bo-Katan’s absence always bothered me. Now that she’s coming back, I hope we’ll get to learn more about what she’s been up to these past years and see how she’ll have an impact on the events going on in the galaxy. 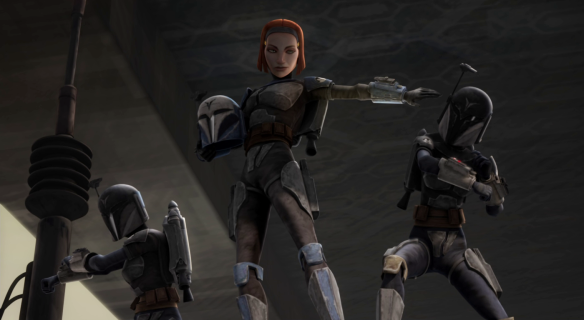 Also returning is Saw Garrera. The first character from an animated series to have a live-action role as well, we first met Saw in The Clone Wars, and then again during Rebels’s third season. What we know about Saw is that he’s an extremist—he nearly caused the extinction of one species, and at one point had some of his men brutally murder Kallus’s first platoon when he was stationed on Onderon. The third season showed Saw’s disagreements with the rest of the Rebels, but it’s in Rogue One that we learn he’s cut ties with them. Season 4 will go more into that and explain what actually happened. In all honesty, though, while I’m interested in learning what happens if only for the sake of closure, I wasn’t too impressed with Saw’s character last season. His character arc now revolves around his fridged sister, and that’s definitely something I could do without. I want to hope that Season 4 will improve on him and further round out his character, but as it is, I currently find watching Saw uncomfortable.

Season 4 is set the air sometime this fall, still way too far away, but I will be spending that time waiting impatiently. Until then, there’s always fanfiction.