In honor of Earth Day, which was just this past Saturday, let’s talk about Earth magic! Many fantasy stories are filled with the idea that the Earth is a magical thing, and it certainly seems that way in real life. After all, this beautiful planet is where we live and grow, and where we get to see gorgeous sights or amazing animals. After watching just one episode of Planet Earth, you can understand why so many fantasy authors see the Earth and magic as one and the same.

But despite the fact that our world is so beautiful and amazing, fantasy authors have also recognized that humans, for whatever reason, seem intent on destroying it. Because of this, fantasy authors tend to incorporate nature spirits that fight on behalf of nature and call us to take up the fight as well. Even when fantasy authors write about other worlds that are different from ours, they still address issues of environmentalism that are relevant to our society.

In Lord of the Rings, there are of course the Ents, giant anthropomorphic tree creatures, that act as shepherds to the trees by herding them and protecting them. Ents are supposed to be as old as the elves, having appeared in Middle-earth around the same time. They were created by a goddess mentioned in The Silmarillion named Yavanna. Yavanna created the trees and when she heard that other races like dwarves and men would cut her trees down, she created the Ents to protect them. In the books the Ents become enraged when they see how many trees Saruman has cut down and destroy Isengard in their fury. That said, the trees themselves in Lord of the Rings also have power. It seems that the older the forest, the more sentient the trees; they can attack those who come into the woods and even seem visibly angry when they see Gimli’s axe. The nature spirits in Lord of the Rings are pretty awesome to an angry environmentalist like myself, but it largely seems to just be a cathartic story where we get to see nature fight back against the tide of uncontrolled progress and consumption. But the sad fact of the matter is that there are no nature spirits to fight those battles for the Earth. It’s up to humans to do that here. That’s probably why some of my favorite nature spirits are those who call on us to do something. 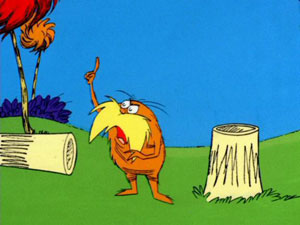 One of the most famous nature spirits from our childhood is the Lorax, and I’m not talking about the one from the new crappy movie, but the old animated one. The Lorax speaks out against the Once-ler, who is cutting down and using up all the Truffula trees. He “speaks for the trees”, but ultimately the loses the battle against the Once-ler and the population, and the suffering of the plants and animals causes him to leave. The Once-ler is telling the story of the Lorax to a little boy after realizing the error of his ways and gives the little boy the last Truffula tree seed, telling him, “Unless someone like you cares a whole awful lot, nothing’s going to get better. It’s not.“ The Lorax might not specifically be the person who calls the readers to take care of the Earth, but the Lorax’s message of caring for the environment eventually affects the Once-ler, even if he realizes it too late. So the Once-ler in some ways becomes a new nature spirit taking on the Lorax’s role and urging people to do better than him.

This is also reflected in the book series Percy Jackson and the Olympians. In the books, the animals, plants, and other nature spirits like satyrs are concerned because the god of the wild, Pan, has gone missing and many believe that he is dead, leaving no one to protect the Earth. It’s suggested that Pan’s disappearance is why our world is so polluted and being harmed by man made elements. Without Pan to protect nature, the earth is dying. The satyrs are desperate to find Pan and Grover, a satyr and friend of Percy, eventually finds him. Pan is not dead yet, but is dying. He is surrounded by extinct creatures and Pan keeps fading in and out as he dies. Pan eventually explains to Grover that it is up to him and the rest of life to protect the Earth before he finally passes away. When he passes, the the extinct animals that were with him also fade away. Pan’s death and the passing of the extinct creatures in many ways symbolizes our past mistakes. This great nature spirit along with the animals he protected have died, but now Grover and the others are asking us to continue trying to protect nature. Again we have a nature spirit calling on us to fulfill the role of protector. 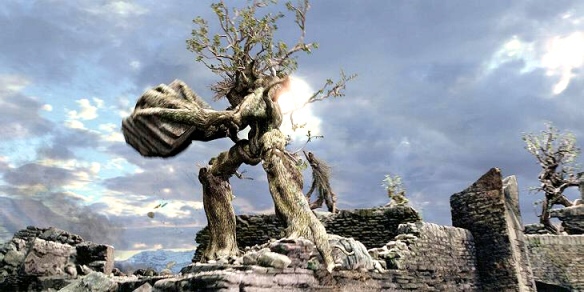 I like to believe that most people don’t want our planet and all the living creatures on it to die, but it often seems like we don’t want to do anything about the damage we’ve already caused. However, nature spirits in our stories are there to hold us accountable. As creatures outside of humanity who don’t have a human-centric world and instead see how everything on the planet works together, they’re the perfect advocates for the Earth. Nature spirits in our pop culture call on us to make change happen and that is something we especially need today.