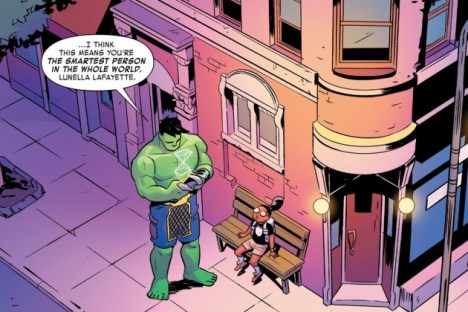 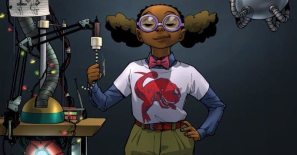 After fighting off the robots with the help of Riri Williams, aka Ironheart, Lunella and Riri track the strange energy signature the robots emit back to its source: a projection of Dr. Doom. Doom disappears, along with the energy, and Lunella is left to figure out what it was and how she can find it again. After all, if she can’t identify it, she can’t track it, and therefore can’t tell when Doom may appear again. She quickly comes up with a theory, however: by tracking the wave patterns and determining that they’re “beyond… well… even theoretical science”, she realizes that the energy must have been magic.

Many scientists would throw up their hands at this point. Magic is typically considered antithetical to science in the same way religion is; something that defies the scientific method or any kind of experimental study. Lunella is smarter than that, however. Whether or not magic is something she understands yet, she knows empirically that it must exist because she’s seen it in action. And since it must exist, she determines that it’s just a different type of energy that other scientists have not yet been able to map or quantify. So she builds a tracker to pick up on that particular energy signature, and sets out with Devil Dinosaur to follow it.

Due to that whole “NYC being filled with magic users” thing, though, it ends up bringing her to Doctor Strange’s house instead. When she asks him about how magic works from a scientific standpoint, hoping that a medical doctor might have similar interests, Strange instead offers her some guidance that she finds trite: that magic just works. “There’s always a way it works. Nothing just works,” Lunella insists. “Magic does,” he replies. “Sometimes you have to have faith, Lunella Lafayette.” (Emphasis from the letterer.) 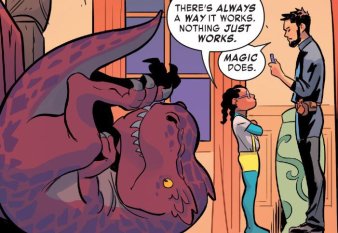 Strange is not, however, the Smartest There Is, and Lunella is deeply unsatisfied with the ineffability of his answer. She is determined that magic must have rules like any other discipline, because there are identifiable causes and effects: a potion does the same thing every time if you mix it the same way, for example, and spellcasters wouldn’t depend on a spell if it did something different every time it was cast. With some tinkering, she’s able to build a device that can sense Doctor Doom’s particular brand of magic, and eventually comes together with the allies she’s made along the way to take him down.

This is a very unique way of approaching magic, because Lunella doesn’t invalidate it. She insists that it has to be quantifiable, but she never goes so far as to insist that magic is not real, or that it’s just science we haven’t figured out yet. As grumpy as she is about Strange’s vagueness, she still acknowledges that magic is a separate force that exists in the universe. However, she feels that since it is still energy, it has to follow the same types of rules that any kind of energy must. Just because it isn’t science, doesn’t mean she can’t use the scientific method to understand it.

Along with being unique, this treatment of magic is also fascinatingly different from other series’ attitudes toward magic. For example, we never see the characters in Harry Potter turning a scientific eye toward magic, even bright and curious Muggleborns like Hermione. Rather than thinking of a clever new way to study the principles of magic or apply Muggle technology to magical problems, Hermione just goes full “do as Romans do” and accepts the ways of the wizarding world unquestioningly. And she’s considered the brightest witch of her age! On the flip side of that, I’ve talked before about Princess Bubblegum’s opinions on magic as well. Peebs is a genius, but instead of accepting the evidence of her eyes and trying to learn about magic, she dismisses all magic as hokum and constantly searches for ways to disprove it. This makes her ultimately seem small-minded and less intelligent than she’s supposed to be, because despite being able to see and experience magic, she insists that it’s ineffective and no match for science. That’s why it’s so appealing to have a character who wants to study magic from a scientific perspective. Rather than dismissing one side of things out of hand, Lunella is smart enough to look at magic as just another new thing to understand, rather than something to feel polarized toward or against. 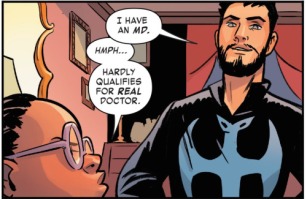 But seriously he’s so adorable can I keep him. (via attilanrising)

Unfortunately, Lunella’s investigation with magic as a whole ends up getting a bit sidelined in the last two issues of the arc, thanks to a surprise visit from the X-Men and a climactic battle that’s more about the magic of friendship than actual magic. (Not that that isn’t a great kind of magic, especially for a book aimed at middle-schoolers, but still.) I’d be interested to see the next arc return to this quandary and settle it in a more satisfying way, and I’m not just saying that because I’m in love with Doctor Strange as written and drawn by this creative team. What if Lunella’s research on magic leads magic users to a greater understanding of their craft? What if she learns how to harness magical energy through scientific means? Being the smartest doesn’t mean she knows the most—it means she has the greatest capacity to learn and understand things, and I for one think it would be awesome if she applied this ability to understanding what so many others have written off as unexplainable.

3 thoughts on “Magical Mondays: “The Smartest There Is” Takes on Magic”