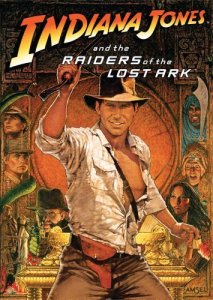 For this installment of Throwback Thursdays, I decided to revisit Indiana Jones and the Raiders of the Lost Ark (1981)—the first installment in the Indiana Jones trilogy—since I didn’t realize how long rewatching the whole trilogy would take. The movie trilogy and the character of Indiana Jones were some of my formative influences as a child. I dreamed of unlocking the world’s mysteries and these movies showed an academic leading a glamorous life of adventure, hunting mysterious artifacts and overcoming difficulties using his knowledge and reasoning powers. However, watching Raiders of the Lost Ark as an adult rather requires that I turn my brain off if I want to actually enjoy it because of the number of glaring issues regarding racial and cultural representation, as well as gendered character tropes.

Spoilers for the movie below, obviously.

In case you’re unfamiliar with this movie, the plot follows Indiana Jones, an archaeology professor and a sort of ancient artifact hunter, as he goes up against the Nazi forces in pursuit of the biblical Ark of the Covenant, a chest supposed to contain the shards of the stone plates on which the Ten Commandments were written. Marion, a woman in possession of one of the key clues to the Ark’s location, tags along for the adventure.

The creators of Raiders of the Lost Ark sure do know how to craft a gripping and fun action flick. There’s plenty of fun chases and fights, which still seem intense even when watching them for the umpteenth time, and Harrison Ford is really good at playing the intrepid scholar. Indiana Jones is just cool. Also, despite the theological implications, I’m fascinated by plots involving biblical themes and relics, in particular speculating what would happen if they actually existed.

However, watching this movie, one also has to consider the implications of what Indiana Jones does: namely, taking culturally/religiously important relics from the people they belong to so that they can be placed on display at a museum in the U.S. It’s just like the mind of the white colonizers who paid no respect to the local people and were only concerned with taking anything of value. Admittedly, Indy’s motive is to preserve and study the objects: to learn from them. However, in a way, that may be even more insidious, because it assumes that the places he takes them from have no scholars of their own who might actually be better equipped to study these relics, given that they’re the ones who know their culture best.

A related problem is that for a story that takes place mostly in unspecified locations in South America, Nepal, and Egypt, this movie really doesn’t treat the local cultures and people with any respect or nuance. Instead, they are portrayed largely as offensive stereotypical caricatures. For instance, the indigenous people of the location in South America, which wasn’t even specified any further, are portrayed as mindless savages who follow a white man apparently simply because he can speak their language. Additionally, Sallah, an Egyptian supporting character, is played by a white actor. It’s a particular shame because Sallah is perhaps the best developed supporting character in this movie and if he wasn’t whitewashed would provide half-way decent representation, although he’d still be just one character.

At least she punched him, that was something I suppose. (gif by phyllisdietrichson)

Speaking of one character representing a group of people, there is also Marion Ravenwood, the only female character of significance in Raiders of the Lost Ark. In her introduction sequence, she is established as a tough woman who can drink any man under the table. Yet she is also effortlessly feminine, easily transformed by changing into any fancy dress for the purposes of the male gaze. Overall, the whole point of her character seems to be to provide a key piece of the puzzle (which she is only in possession of because her father left it to her) and to be a love interest to Indiana. Despite the fact that Marion appears to know how to handle herself in dangerous situations, she still ends up suffering from the damsel in distress trope and is treated as an object by bad guys who want to keep her.

Indiana Jones and the Raiders of the Lost Ark still has a special place in my heart as a movie that I was fascinated by as a child. It may not have the cleverest of plots, but Indiana Jones is cool, the movie is exciting, and watching Nazis lose is always entertaining. However, it does have several problems when it comes to representation of different cultures and women, reducing them to stereotypical caricatures and damsel in distress, respectively. It also furthers the ideas of white colonialism, in particular that it is okay to steal relics of significance from other cultures due to the notion that they wouldn’t know how to preserve/study them themselves. Although I can still turn off my brain and enjoy this movie, I’m starting to think that it might not be worth it.