Back at the start of 2016, I spotlighted a little webcomic called Always Human as my web crush of the week because it featured a lovely queer romance and some fantastic art and music. Since then, it’s become one of my favorite web crushes (next to The Adventure Zone and They Call Us Bruce) not only because of the relationship between Austen and Sunati, but also because of the way that diversity of all sorts is seamlessly blended into the story. Always Human is set in a future version of our Australia, and while future Australia of course has various technological advances, it’s also filled with racial diversity, different sexual orientations and gender identities, and both polyamorous and monogamous relationships. I’m always excited to read more of Austen and Sunati’s slice-of-life adventures, but perhaps my favorite thing about the series is author Ari’s depiction of disability in a fantastical world.

Spoilers for Always Human below, as well as a trigger warning for discussions of ableism and fatphobia.

In the world of Always Human, most humans can use technology known as “mods”: modifications which can do innocuous things such as change your hair or eye color, or more impactful things like giving yourself better memory and stamina. Usage of these mods have become commonplace enough that humans who can’t or don’t use mods are seen as extremely strange. That’s what protagonist Sunati thinks when she sees our other protagonist Austen at a train station, looking the same day after day. When Sunati talks to Austen, though, she quickly learns that Austen has a rare autoimmune disorder known as Egan’s syndrome, which means that she can’t use any mods at all.

Other stories which feature characters with fantastical disabilities often gloss over said disabilities—Remus Lupin may be a werewolf, but because the story is from Harry’s perspective, the only effect Remus’s werewolfism has on the story is when it inadvertently leads to a big fuckup at the end of Book 3 and when Remus turns spy in Book 6. Similarly, Squibs in Harry Potter are arguably disabled because they cannot perform magic in a magical world, but the ones we meet, like Argus Filch and Mrs. Figg, are given little agency and are generally seen as jokes. In all the stories with fictional amputees, like in Star Wars, we never see anything about how the amputee learns to deal with the loss of a limb or how they learn to use their shiny new prosthetics or what kind of impact those prosthetics have on their quality of life. Always Human’s Egan’s syndrome is definitely a made-up disability, but unlike these other series, Ari focuses on it and the physical and psychological consequences with which Austen has to deal.

It’s precisely because Always Human is a slice-of-life story that it can’t just forget Austen’s disability when it’s inconvenient. Egan’s syndrome affects Austen’s life in every way: she needs extra time on tests because she can’t use memory mods, she can’t change her looks on the slightest whim, and she’s concerned with her weight because she can’t just make herself thin with a mod, amongst other things. But Always Human illustrates what it’s like to live with a disability without making the entire story about Austen’s disability, and in fact, it’s through Austen’s relationship with Sunati that we get the clearest messages about disability, ableism, and privilege.

Sunati, the able-bodied partner in this relationship, has been raised in a society where mods are so common that she didn’t even know there were people who couldn’t use mods, and this leads to some unintended ableism on her part. In their first meeting, Sunati sees Austen sneezing and offers her a hayfever mod, assuming that Austen can of course use mods. When they start dating, Sunati struggles with whether or not she should use fashion mods: she loves them and changes her look often, but starts thinking that maybe she should use them less just because Austen can’t use them. She praises Austen for being “so brave” just for getting up every day and going through life with her disability without understanding how hurtful that sounds.

This isn’t a particularly auspicious beginning for our fluffy cutesy wlw couple, and that’s actually part of what makes it so great. In many romcoms with disabled protagonists (not that there are many), somehow everything ends up great and there are no misunderstandings and no one has to face up to their own subconscious biases. In Always Human, Sunati is made to think about and address her own privilege. She goes out of her way to educate herself about Egan’s before talking to Austen again, thus taking the onus off Austen to waste spoons educating her, and she realizes that her ability to use mods isn’t “normal” but actually marks her as pretty lucky. Austen’s younger sibling, Yasel, tells Sunati off for thinking that avoiding fashion mods will make Austen happy, and Sunati has a nice conversation with Austen and realizes that she relies on fashion mods to give herself confidence and wrongly assumed that Austen needed that too. Sunati’s not a particularly brave or confident person herself, so she does admire Austen’s independence and courage, but she learns to express her feelings in a way that doesn’t sound infantilizing. Her many mistakes in regards to Austen’s disability aren’t glossed over—she’s allowed to make mistakes, acknowledge them, and grow as a person. This realism is what grounds Austen and Sunati’s relationship and makes it relatable even in a far-off, future Australia. 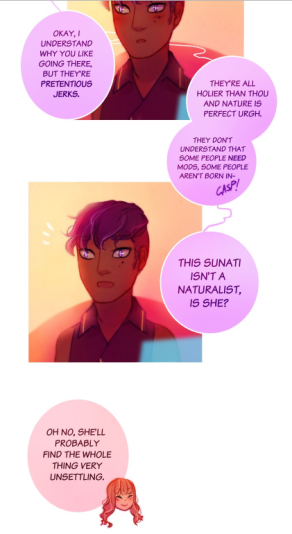 There’s even a bit about how people in naturalist communes are only not using mods because they think it’s “cool”. (via Always Human)

Austen, on the other hand, starts off as a little off-putting. When Sunati offers her the hayfever mod, she’s had one too many microaggressions that day, shouts at Sunati that she’ll never be able to use mods, and leaves in a huff. The next day, Austen apologizes to Sunati and tries to explain what was going on in her life the previous day, but this conversation also gets derailed when Sunati admits that it was how Austen looked (ie, mod-less) that she first wanted to talk to Austen. A prickly Austen accuses Sunati of only being interested in her because of her disability, but Sunati is able to convince her that there are other reasons as well. On their second date, Austen takes Sunati to a naturalist commune: a place where people who can use mods choose not to use them. Though part of the reason for this is that Austen wants Sunati to really know what she’s getting into, Austen also says that a large part of the reason she likes it is that at least no one there stares at her constantly and asks her to do things with mods that she just can’t do. Throughout their rocky beginning, Austen’s frustrations are acknowledged, and the narrative never makes her seem irrational for having them. Austen does learn about patience and clear communication, but it’s Sunati who realizes that her previous behavior was wrong and changes accordingly.

Austen doesn’t just have to deal with pressure from the outside world, she also puts a lot of burdens on herself to “make up” for her disability. While Sunati has already graduated college and has a job, Austen is still in school, studying to be a geneticist because she wants to find a cure for Egan’s (or barring that, at least direct more attention towards it by working towards a cure). However, she finds the courses really hard, especially because she doesn’t have the memory mods to remember all the info, and even with extra time allowed on her tests due to her disability, she’s not good at science. Along with all of that, she also carves out time to exercise and is strict about staying on a diet, because she’s really self-conscious that she can’t just use a thin mod to make herself thin. It’s a lot, and she has a lot of tough nights trying to do it all.

It takes help from her advisor and her girlfriend to make Austen understand that she’s being unfairly hard on herself. Her advisor suggests that she change her major to computer science, which is something she really likes. Changing your major in college is something that most people do, but for Austen it becomes a really big deal because it seems to her that it’s just another case of her disability causing her to “fail” (and she thinks for a while that her advisor doesn’t think she can do it because of her disability, which isn’t the case). Austen has to realize that adjusting her previous dreams doesn’t mean she’s failed—an important message for anyone growing up, but it’s especially poignant here. When she talks with Sunati about her weight, Sunati tells her that she can see that Austen likes exercising, but hates her diet, and shares research that says that getting bigger doesn’t necessarily mean unhealthy. Austen will literally never be able to have the physique that she wants, and she learns that there’s no need to continue making herself miserable pursuing it.

Always Human’s portrayal of disability rings true to me, but I don’t have a physical disability myself to speak for its authenticity. Fortunately, there are many fans of this comic who do have disabilities, and when a chapter is focused on Austen’s life, comments like these are common:

Though Egan’s syndrome is a made-up disability for a fictional world, the issues that Austen has to deal with—microaggressions and ignorance from her loved ones and pressure from herself to face up to a world with ableist norms—are real issues that real people with disabilities face every day. Always Human is a great example of how to portray a fictional disability that doesn’t disregard the “disability” part of the fiction, and other stories should learn from what it’s doing.

2 thoughts on “In Brightest Day: Interrogating Disability and Privilege in Always Human”