This is definitely a “cool” trailer—it reminds me a bit of the trailer for the third Star Trek movie, in that it feels funny and action-y and not really at all in line with the themes of the Thor movies so far. The first two movies were grand, fantasy-heavy space opera-esque movies—as far into hard fantasy as the MCU ever went. That presumably worked for them, but Ragnarok—which I keep mispelling Ragnarock, an error not helped by “The Immigrant Song” screaming in my head—seems to be giving us a different Thor than we’ve seen in other movies. Thor in the team-up movies tends to play more of a comedic relief role, while going for a more serious presentation in his own films. This is fair to some extent, as he’s still a bit of a fish out of water in the team-ups, while he’s pursuing his own legacy and identity in the Thor movies. However, Ragnarok’s Thor is funny, but in a more self-aware, self-deprecating way than we’ve seen from previous films.

Outside of that, I’m also concerned about the Valkyrie role. While I’m psyched that they cast Tessa Thompson to play the character (as she’s a Nordic-looking white woman in the comics), I’m conflicted about her potential as Thor’s romantic partner. On one hand, having a Black woman as the romantic lead of a tentpole superhero movie would be awesome, and an amazing win for representation of women of color in the MCU. However, Valkyrie in the comics is canonically a lesbian, and the MCU is also gravely lacking in notable, positive LGBTQ+ representation. Either way that ends up going, I also hope that she transcends her role as it appears in this trailer: specifically, as a subordinate to a white man. With no noteworthy Black women in the MCU (don’t @ me about Gamora—Zoe Saldana is Black, but Gamora is a green-skinned alien), it’s a bummer to have the first one be in a role that lacks agency. 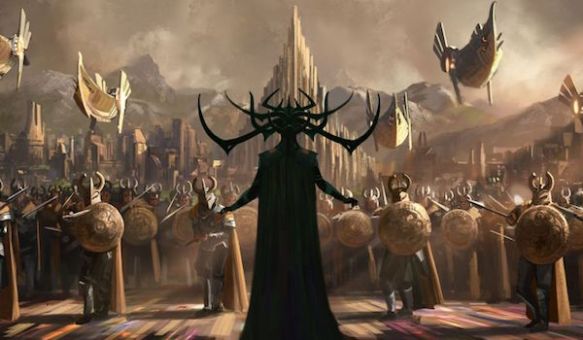 That doesn’t mean that this movie, hell, this trailer, isn’t filled with things I’m excited about. Cate Blanchett is clearly going to kill it as Hela, and I can’t wait to watch Jeff Goldblum Goldblum-ing his way around the space-Coliseum. The unrepentant fangirl in me is excited to see how Loki develops in this movie, and it’s nice to see the Hulk again, especially in something far away from Joss Whedon. Given his last appearance was in the shitfest that was Age of Ultron, pretty much anything will be a step up for the character at this point. (I’m less pleased that Dr. Strange is also supposed to show up in this film.) Even if the movie ends up feeling like a far cry from the other Thor films, it does certainly look like it will be fun to watch.

Going back to my comparison to the Star Trek Beyond trailer as well, that first, seemingly off-tone preview ended up accompanying the most on-point, Star Trek-y movie of the three AOS films. So maybe there is hope that this movie will be both a great science fantasy action movie and a great Thor movie. I suppose I’ll just have to wait and see.